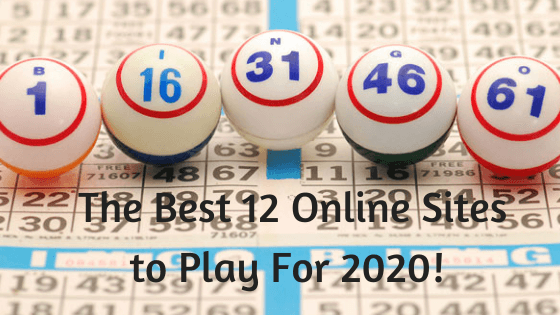 Bingo is the most popular game played by one and all. It is full of fun and excitement. This game of chance is played with cards or number balls. You have to match the randomly drawn numbers against the numbers printed on Bingo cards. The winner is usually required to call out the word “Bingo!”, which alerts the other players and caller of a possible win. All wins are checked to make sure the person has not made a mistake before the win is officially confirmed at which time the prize is secured and a new game is begun. You then compete against other players for the prize or jackpot.

Since its invention in 1929, modern bingo has evolved into multiple variations, with each jurisdiction’s gambling laws regulating how the game is played. There are also nearly unlimited patterns that may be specified for play. Some games require only one number to be matched, while cover-all games award the jackpot for covering an entire card. There are even games that award prizes to players for matching no numbers or achieving no pattern.

There are many methods to play Bingo which add more spice and fun to Bingo game.

Types of Bingo Games you can play

Popular form of Bingo where you mark the numbers you wish to monitor for a win. While this game closely resembles Keno, it is recognized as a variant of bingo and is permitted in almost all jurisdictions.

Here numbers are pre-drawn and you purchase sealed bingo cards which are then matched against the pre-drawn numbers. If a specified pattern is achieved, then the player usually wins a prize according to a prize table. This type of bingo may be played over days, weeks or months depending on the difficulty of achieving a top level prize.

Here 43 to 48 numbers are pre-drawn at the beginning of a bingo session. The numbers pre-drawn can be odd, even or the first 43 numbers that pop out the machine. Players purchase cards and mark out all even, odd or pre-drawn numbers. At a designated time, the caller asks if anyone has bingo. If no one does, the caller then draws one ball at a time until someone shouts bingo. This game is sometimes played as a “progressive” game, where the jackpot increases if no one hits bingo before the desired amount of balls are called.

A lottery game called “Il Giuoco del Lotto d’Italia” was being played in Italy by about 1530. In eighteenth-century France playing cards, tokens and the calling out of numbers were added. In the nineteenth century a game like this was widely played in Germany to teach children spelling, animal names and multiplication tables.

Bingo on Facebook differs from traditional online or land based bingo games. Most games feature ‘power-ups’ which give individual players an advantage on winning the game when using such power-ups. Players can also collect, buy and share virtual items with friends on the Facebook platform.

Here 15 players are randomly issued a number from 1 to 15 which corresponds with the top row of the bingo flashboard. Numbers are then drawn and the first person to have all five numbers in their column be drawn wins. This is a fast paced and exciting form of bingo

With the expansion of Tribal gaming across the US, there are numerous versions of bingo which now emulate the fast action of casino like table games but utilize the principals of bingo where players mark and monitor matrices cards with chips. Casino games like Roulette, Acey Duecy and Money Wheel have bingo counterparts which are permitted to be played under bingo licenses in many parts of the country.

The French game Le Lotto appeared in 1778, featuring 27 squares in a layout of three rows and nine columns. Five squares in each row had numbers ranging from 1 through 90, which led to the modern design. In the early 1920s Hugh J. Ward standardized the game at carnivals in and around Pittsburgh and the Western Pennsylvania area. The game was further popularized by Edwin Lowe.

While at a travelling near Atlanta in December 1929 the toy merchandiser saw people eagerly playing a game called “Beano” following Ward’s rules, with dried beans, a rubber stamp, and cardboard sheets. Lowe took the game to New York where friends liked playing it.

The Lowe-produced Bingo game had two versions, a 12-card set for $1.00 and a $2.00 set with 24 cards. By the 1940s there were Bingo games throughout the US.The origin of the name Bingo is unknown but may date to the middle 1920s. There are claims that one of Lowe’s friends was so excited to have won that she yelled out “Bingo” instead of “Beano,” or that the word echoes the sound of a bell.

An inverted game where a player that gets a bingo is eliminated and knocked out of the game. The winner is the player who fills out the most spaces on their board before getting a bingo.

According to Wikipedia, in the US, the game is primarily staged by churches or charity organizations. Their legality and stakes vary by state regulation. In some states, bingo halls are rented out to sponsoring organizations, and such halls often run games almost every day.

Commercial bingo games in the US are primarily offered by casinos (and then only in the state of Nevada), and by Native American bingo halls, which are often housed in the same location as Native American-run casinos. In Nevada, bingo is offered mainly by casinos that cater to local gamblers, and not the famous tourist resorts. They usually offer one-hour sessions, on the odd hours, i.e. 9am, 11am, 1pm etc. daily, typically from 9am through 11pm, with relatively modest stakes except for coverall jackpots.

Station Casinos, a chain of locals-oriented casinos in Las Vegas, offers a special game each session, called “Jumbo” that ties all of its properties together with a large progressive jackpot. Most Bingo parlors in Las Vegas use hand held machines on which the games are played, except the Station Casino, the Fiesta Casino which has paper bingo cards and no machines.

Bingo halls are sometimes linked together like Loto Quebec in Canada in a network to provide alternative winning structures and bigger prizes.

Bingo is also the basis for online games sold through licensed lotteries. Tickets are sold as for other numbers games, and the players get receipts with their numbers arranged as on a regular bingo card. The daily or weekly draw is normally broadcast on television. These games offer higher prizes and are more difficult to win.

These days it is quite convenient to play Bingo online and win awesome prizes. Here are the best 12 online sites to play Bingo for 2020

Cyberbingo is the best online bingo site since 1996. You can play online Bingo games with some of the best offers and promotions. Play Saturdays from 8pm-midnight EST for a chance to win $1000 coveralls. You can play Bingo with your Mobile too.

As Bonus offers changes each month, click here to know the latest.

Bingo Hall is most popular online Bingo site where you can play many variations of Bingo. You will find 75 ball bingo in more than 300 patterns and can play with your smartphones too. Fusion Friday holds their popular $1,000 hidden cash prize, as well as $500 fixed bingo games on Wednesdays- 12pm-1pm EST. Get 3 friends together to join their online bingo team Smackdown every Thursday with a chance to win $3,000. 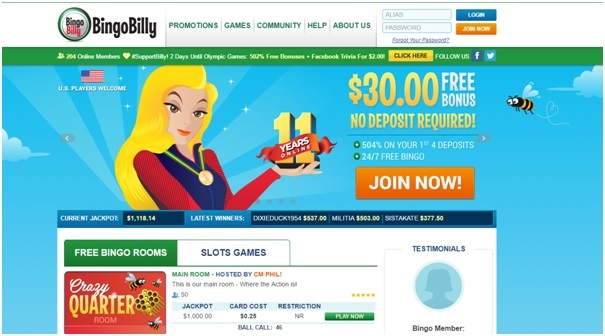 Bingo billy is another great site that offers a huge selection of 75 ball, chat games and progressive jackpots. There is always lots going on like free bingo all day, cash back bonus day and progressive bonuses. You will love free bingo games, and Bingo Billy has just what you need in the Wild Penny Room; free online bingo 24 hours a day, 7 days a week! There are no card costs because it’s free bingo, at its best. If you’re a depositing member you also have the choice of playing in the Green Room, where more free bingo games await you.

At Bingo Cabin you can have more fun playing online when you use Leap Frog 3D interactive software, so you get to play with an avatar here. This 3D environment is unique and offers Mini slots and 75 ball to mention a few. They have great chat games, 3D online bingo games, and great competition.

This online bingo site is a UK site but accepts US players to play Bingo. It has been around since 2006 and has a wide range of 75,80,90 ball, keno and instant wins. Monday is buy one get one free and you can win on occasion prizes such as vacations, ipod or home cinema systems when you play mini games. You can enjoy two fun-filled hours of Bingo 90 every morning from 7am-9am in Breakfast Club. As a new member you can play Bingo for free in Learner Room from 11am-1pm and 6pm-8pm for your first 7 days. Meet friendly chat hosts and make new Bingo buddies. Choose a mystery cash amount or a sealed box every week in Chat for your chance to scoop a fantastic prize.

Here you will love to play 75 ball Bingo every Friday evening for a chance to win a $1,000 hidden cash prize. Find 150%-400% daily reloads, as well as prizes like jewellery and luxury cruises on occasion. This bingo site has great customer support for players.

Bingo Canada offers a wide selection of bingo online from mid day specials to Ladies Day and Hilda’s Revenge. You have the choice to play free bingo games or with real money. You will have a chance to win some pretty amazing prizes and some of the highest progressive jackpots. 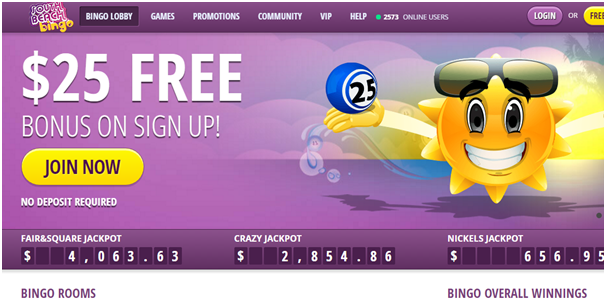 South Beach Bingo is very US bingo player friendly site and one where the bingo bonuses flow every single day of the week, you will always get the maximum value out of your bingo budget playing at this leading site. 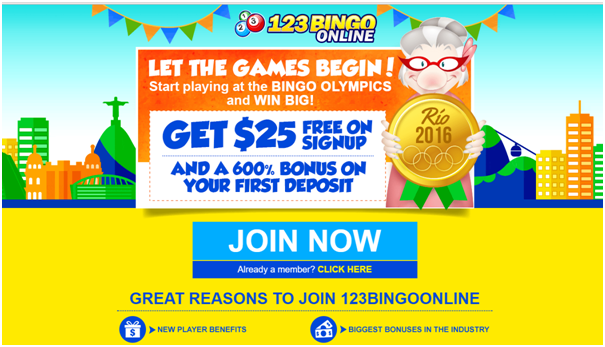 123Bingo Online is established featured online bingo sites, with spotless track record in giving all US players the best the web has to offer in regards to bingo games, bingo bonuses and rapid payouts.

Bonuses: $25no deposit bonus; 600% Match bonus on your first deposit 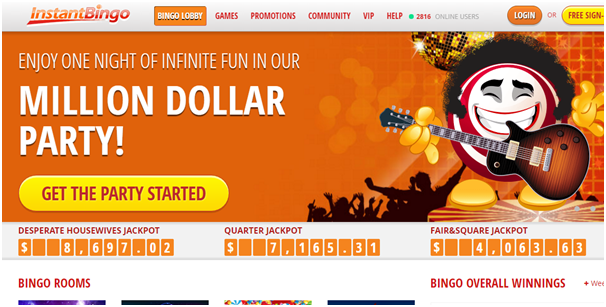 You will be able to play bingo online in an instant with no need to download any form of bingo software platform , enjoy various Bingo rooms, make friends and moreover win heaps of prizes and rewards. 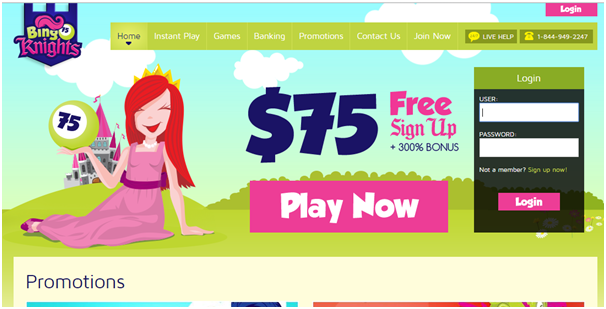 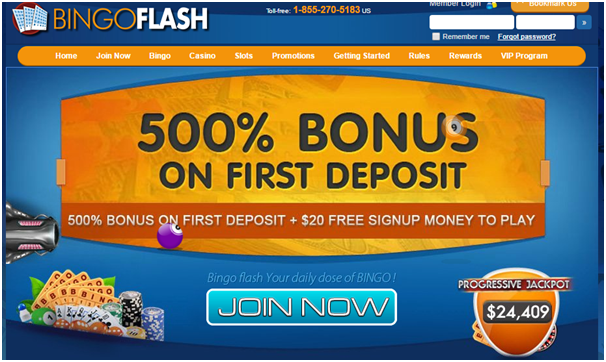 Besides these best 12 Bingo sites you can also enjoy some Bingo Apps for mobile play like Bingo USA. Also you can grab some awesome offers at Bingo sites and look for coupon codes to redeem when playing Bingo. Are you yelling something…Go on BINGO!