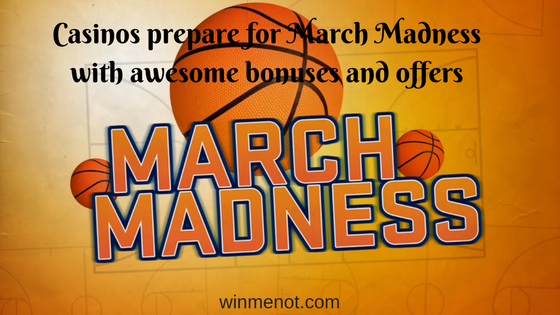 Casinos prepare for March Madness with awesome bonuses and offers

March Madness is here again and that means gambling on who will eventually wind up in the finals. Last year statistics showed that Americans wagered over $9.2 billion on March Madness and this staggering number included wagers through office pools, Nevada sports books, illicit offshore sites and illegal bookies.

When looking at the betting lines during March Madness, you will notice that there is a seemingly endless number of games to bet on. While that can certainly be daunting, there are some NCAA betting tips to follow that will give you the best chance of making money from March Madness betting, whether you bet with one of the top online sports books or enter the Bracket Challenge. 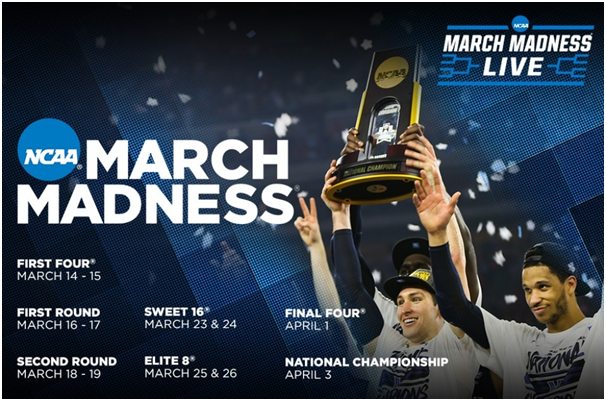 March Madness begins on Selection Sunday 2017 when the NCAA Division I Men’s Basketball Committee reveals which 68 teams have made the field for that year’s basketball championships.

While it can be tempting to bet on the favorites during March Madness, analyzing the NCAA betting trends will show that is a bad idea. Picking out good underdogs is one of the best ways to make money during the tournament. By analyzing the trends and stats involved, you will have a leg up on the field when it comes to betting.

March Madness is a phenomenon that grips the national sports psyche from the second week of March through the first week of April. March Madness is the moniker that is given to the National Collegiate Athletic Association (NCAA) Men’s and Women’s Basketball Tournaments. These tournaments determine the national champions of college basketball.

Duke lost last night, but in the minds of oddsmakers, they’re still the team to beat in March Madness. (Image source:John Angelillo/UPI)

One of the most important NCAA betting tips is to focus on teams that play good defense. While you do not have to put all of your money on teams with excellent defense, it is important not to put your money on a team that gives up a lot of points. Teams that play good, hard-nosed defense often perform much better than the teams that simply want to see how many points they can rack up on the scoreboard.

March Madness brackets at the Casinos

March Madness will fill out its bracket this Sunday, March 12, as 64 teams plus four play-in schools will compete in the single-elimination tournament. The final team standing will be declared the national champions, but as of today, Vegas sports books aren’t quite sure which team has the best chances of cutting down the nets.

At William Hill, UCLA is the favorite at 6-1. The Bruins are followed by Duke and North Carolina (7-1), and Kansas and Gonzaga (15-2).
Walk south down the Strip to Caesars’ sportsbook, and you’ll find Kansas as a heavy favorite at 6-1. Head north to the Stratosphere, and Gonzaga and Kentucky have the slimmest odds at 11-2.

From one sportsbook to the next, those who set the odds can’t seem to find unison in picking a favorite. And that can be good for bettors who can shop around for the best offers on their chosen squads. 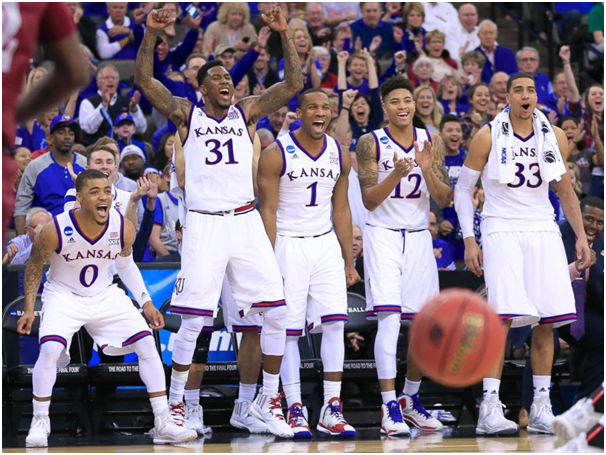 Kansas is the #1 overall seed in the NCAA March Madness tournament, but most experts agree that this year could be one of the more upset-prone Big Dances in recent history. (Image: Nati Harnik/AP Photo)

An estimated 70 million brackets will be completed this year, but one won’t be from President Trump. The 45th commander-in-chief declined to continue President Obama’s tradition of filling out a presidential bracket.

On the official men’s basketball tournament website, the NCAA discusses in length about how #16 seeds are 0-128 against #1 teams in the first round.
Of the millions of brackets that are filled out each year, with many being contested for money amongst friends and coworkers, just 1.45 percent participating in the NCAA’s Bracket Challenge picked Austin Peay over Kansas last year. But 2.85 percent took Hampton over Virginia, and that highlights a growing trend. Five years ago, no #16 seed received even one percent of the brackets cast.

Billionaire Warren Buffett caused a stir two years ago when he offered $1 billion to anyone who could pick a perfect bracket in the annual men’s NCAA basketball tournament known as March Madness. It was a relatively safe bet with the odds ranging anywhere from 1 in 4.3 billion to 1 in 9.2 quintillion depending on who was doing the counting. The Buffett Bracket generated a lot of attention for the world’s third richest man and Quicken Loans, which sponsored the contest. Buffet offers $1 million a year for life for any employee at Berkshire or one of its subsidiaries who picks a perfect bracket through the Sweet 16 of the tournament.

The next two or so weeks is some of the best television viewing for sports fans. One game after another keeps Americans on their couches and recliners.

It’s also a wildly popular time in Vegas. Casinos are readying for an influx of sports bettors, and some venues like the Westgate are all-in. The casino turns its theater into “Hoops Central,” a smoke-free, 1,500-seat space featuring giant HD screens and food and beverage specials.

However, the majority of bets will once again be placed via less than legal means. In addition to the untold millions of dollars in casual bets placed among friends, online books will also pull in large sums of cash.
Bovada has North Carolina and UCLA tied as the favorites (6-1), followed by Kansas (7-1), Gonzaga (8-1), Villanova (10-1), and Duke (11-1).

For many basketball fans, March Madness becomes a four-day vacation. Northern Nevada casinos are filled with locals and tourists alike rooting for their favorite schools to advance in the tournament.
While there’s no shortage of places to watch the games, several casinos are turning March Madness into an event. Here are the few casinos mostly in Las Vegas that are offering great offers.

From Thursday – Saturday, March 16 – March 18 2017
Win a share of $10,000 in the March Mayhem Pick ‘em Challenge. Swipe your casino club card for free entries. Watch the game for free in the Sports Book Party Zone, which offers food and drink specials. Or enjoy the viewing party in the Grand Ballroom for $29.99, which includes light hors d’oeuvres, two drink tickets and prize giveaways.Call for more details at 775-824-4467.

Win $100,000 for correctly picking winners in the Bracket Buster Challenge

March “Bracket “ Madness starts on the 16th March
It’s free to enter the Bracket Challenge and there are prizes for the overall winners as well as prizes for the 1st and 2nd round leaders.

Get your brackets entered by 9am, March 16th. You can win $100,000 for correctly picking winners in the Bracket Buster Challenge. The contest is free and awards $2,000 for the most correct picks during the tournament. Second place pays $500 and third pays $250. Cash prizes also are awarded for the most correct picks after the first weekend. Go to baldinis.pooltracker.com/tourney to enter. Visit the sports book for more promotions. Get details at phone 775-358-0116.

The casino offers a wall of high-definition screens, food and drink specials and prize giveaways. 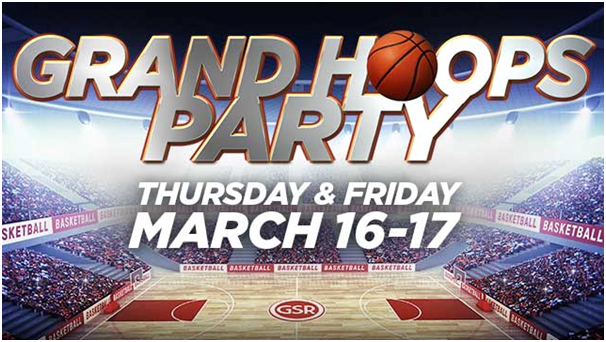 The Grand Hoops party takes place from 8a.m. to 10 p.m. March 16-17 in the Lex Nightclub on Thursday and at Grand Theatre on Friday. Admission is $50 daily, which includes two drinks, an all-you-can-eat stadium buffet and betting stations. Get more details at phone 775-789-2000.

Use Coupon Code MAR17RACE to get year-round $300k annual wagering on race with Games Madness at Golden Nugget Casino!The Golden Race offers you two ways to win: Monthly races: every month, play any game, earn Golden Points, master our leaderboard and win up to $3,500 Annual race: accumulate Golden Points all year long and win up to $2,000 per month for 2018.

You can also wager and bet online at Bitcoin casinos like Betonline.

At other casinos like Island casinos you get $10, $25 and $100 Office pools, all with 100% payouts. Office pools are located in the Sportsbook Main menu under “Office Pools”.

At Golden Nugget Casino you can find at the stage Frankie Moreno for a six-week limited engagement starting 2 March. The sensational singer, songwriter, and showman will bring his high-energy music and lively stage antics to The Showroom for performances 2 March – 13 April at 8 p.m. On 16-19 March: Catch the March Fever at Golden Nugget with guaranteed seats in the VIP section, all you can eat stadium-style food and four drink tickets. Tickets and price information can be found online.

The annual $50,000 Last Man Standing college basketball tournament elimination contest will be held at Station Casinos’ sportsbooks.
Last Man Standing is a daily contest during the 2017 Men’s College Basketball Tournament. Enter now through March 16 at 9 a.m. Entries cost $25 each, and the purchase of four entries earns a fifth for free.

Contestant selection days will be March 16-19, March 23-26, April 1 and 3. The opening round games on March 14 and 15 won’t be part of the Last Man Standing Contest. While the minimum prize guarantee is $50,000, the Last Man Standing takes home the entire prize pot, which is likely to be more as it is based on total entries. 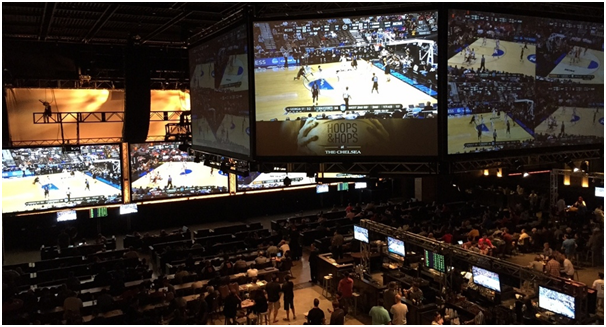 Grab your squad and make your way down to SLS Las Vegas for a college basketball viewing party at Umami Burger, Beer Garden & Sports Book. Their 50 large TVs means you won’t miss any of the action. Drink as much as you can for only $50 bucks the open bar. Drop an extra $50 and you’re guaranteed seating and a food credit to go along with all of that free booze. Food, drank and a guaranteed seat

Plaza Hotel & Casino has one-day viewing passes for $15. Embrace your inner “fan boy,” with a complimentary commemorative shirt, booze and grub. Get the Four-Day pass and for only $40 bucks you get all of the same stuff, but for each day.

You can root for your alma mater and follow the latest “Cinderella” teams inside the Treasure Island Ballroom. There’s no cover, so the banquet table seating is going to fill up quick. Bring your bills because it’s cash bar only. But don’t worry about how much you’ll spend on drinks, concessions and satellite betting stations are going to be on-site too, so you can win all of that beer money back.

Former Las Vegas Mayor, Oscar Goodman and college basketball icon, Thurl Bailey are going to be chillin’ at the Westgate Las Vegas Resort & Casino. The event is free, with reserved seating available for $25. Get here early so you’ll have so you’ll have some time to marvel at their star power.

The madness is here and Tropicana Las Vegas is the place to embrace it. Doors open at 7:00 a.m. and for just $50 per person/per day, you can chug a beer or glass of wine after every alley-oop or deep three pointer –because why not, it’s March and you’ve earned it! Each ticket package includes complimentary entry to the Tropicana pool all weekend, so you can cool off after each day of action.

Most Vegas bars and strip clubs offer food and drink specials while you watch the games. In particular, sports bars and casino bars in hotels with sports betting can be the most fun as you’ll hear swarms of fans and gamblers cheer or lament every free throw and every three-pointer (depending on who they want to win).

Bettors will have numerous wagering options, from individual games to predicting the champion before the tournament begins. Most sports books offer in-play wagering, as well as parlay cards exclusive to its property. Check out your favourite online casinos and sports book for more information, various betting options and lines and enjoy the March madness exclusive offers here.