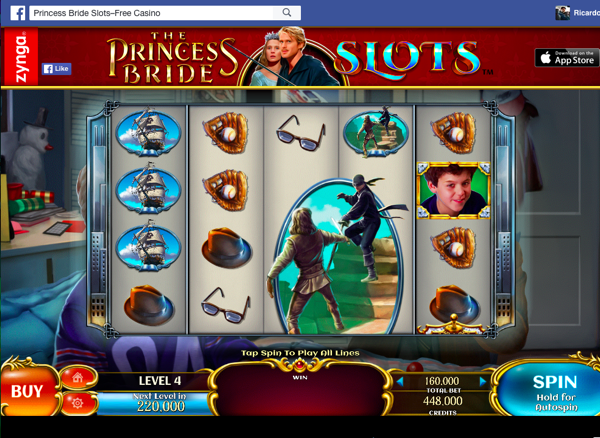 One of the most iconic slot games on Facebook is Princess Bride Slots. Even though it debuted years ago, it still has legions of loyal fans. Every month, 50,000 people still play this game. According to fans this game features groundbreaking graphics, an impressive amount of mini-games & enticing jackpots. Unsurprisingly, this wildly popular game was created by Zynga. This legendary developer has made countless hits that range from slots to farming. After discovering who was behind this, our curiosity wouldn’t let us ignore this game.

This is one of the few casino games based on a major motion picture that’s absolutely free. Die-hard fans clamor to dive into their favorite storylines, & this is no exception. We decided to see what all the fuss is about by exploring this notorious slot game. Find out if the game still lives up to the hype with our in-depth 2017 review! 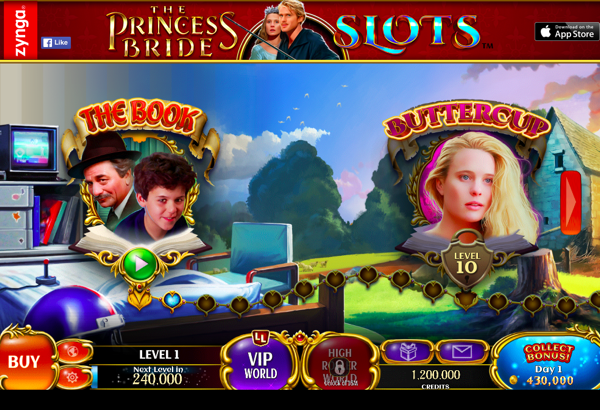 The adventure had just begun…

After the game loaded, I was ushered into a library that was full of surprises. There was a slew of recognizable characters, & it became clear that I was about to dive deep into the movie’s storyline. The first 10 levels revolved around the book, so I decided to join the adventure. 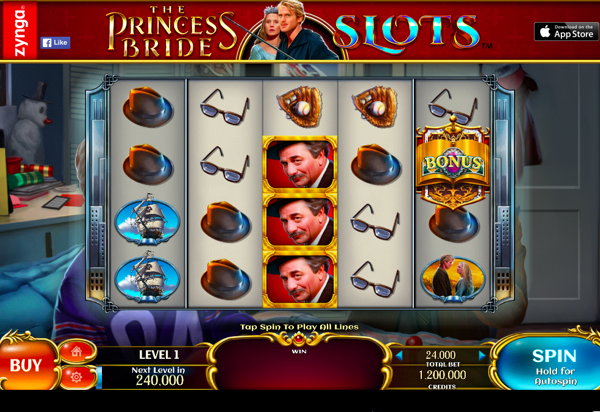 The story was in full swing!

Armed with 1,200,000 credits, I was ready to take on the story. Once I dove into the book a short clip played of the grandpa reading his grandson stories. This video quickly gave way to a slot game, so I started playing with untamed zeal. The slots started off as books, but before long they revealed enchanting secrets. They took us to medieval times where iron clad gentlemen battled for women they loved. 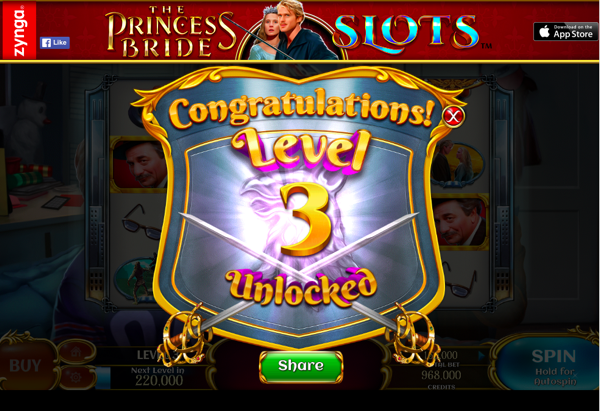 These level ups sure came fast!

After a few spins, I unlocked level 2! This victory gave me a higher max bet, so I took advantage of this new feature. After raising my max bet to a staggering 160,000 credits per spin, I achieved another level up in one spin! This won me 120,000 credits, which paled in comparison to what I was betting. I was still feeling dangerous, so I accepted this measly prize & kept spinning. 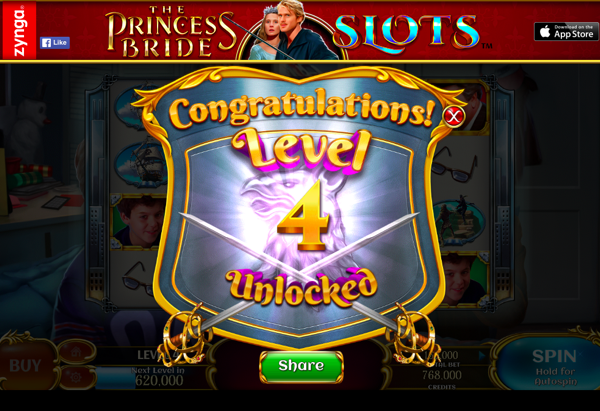 This was getting ridiculous…

After a grand total of 2 spins, I achieved another level up. I began to lose hope, it appeared that there was no way to escape these incessant level ups. To date I had yet to experience something other than a level up with Princess Bride Slots. The reward for this bet was an even higher max bet, but since my coins were disappearing at an alarming rate I kept my bet at 160,000. 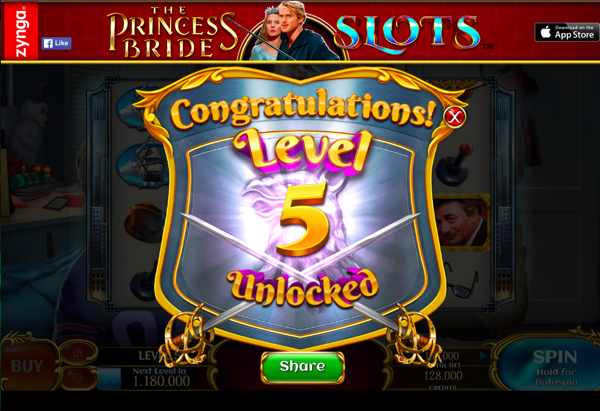 This barrage of level ups ruined the game!

I spun a couple times & was greeted with another unwanted level up. Reaching level 5 netted me 200,000 credits, which was greatly appreciated since my coins had all but disappeared. Unfortunately, this small amount of coins couldn’t save me. After two spins I was completely broke. Slightly perturbed, I quit the game.

It’s sad to see a game with so much potential in this situation. The graphics are stunning, the story is great, but there’s little to no variation during gameplay! After reaching 5 levels, I had literally won zero credits from a spin. I didn’t get to play any bonus games, the only thing I managed to achieve was level ups. This ruined the experience for me since I need variation. Hopefully Zynga does a better job of breaking up the monotony with their next game!