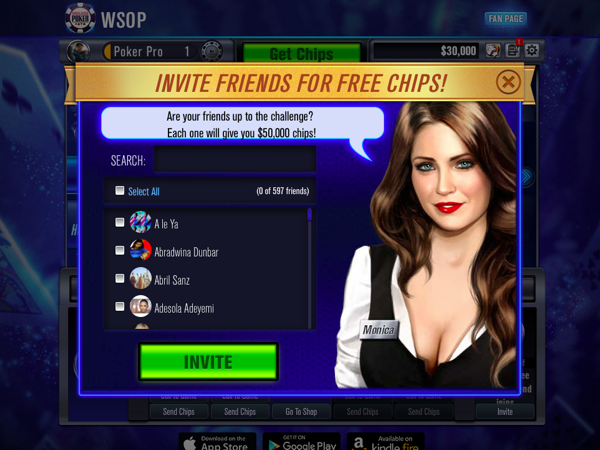 Experience the World Series of Poker

When it comes to Poker on Facebook, World Series of Poker (WSOP) reigns supreme. The game’s cutting edge graphics & cornucopia of options have seduced a staggering amount of followers. Over the years they have accumulated a cult following of over 1 million monthly players.

One of the biggest attractions is the sheer diversity of this app. Cash games, huge tournaments & fast paced gameplay are offered to every new member. There are free chips every 4 hours, so there’s no excuses not to play. You can even win WSOP rings by competing in their numerous multi-tiered tournaments! They even provide extensive stats tracking, so you know exactly how you are progressing.

This surprising versatility makes this game enticing to both beginners & elite poker players alike. It’s no surprise that this game was created by Playtika. But after years of receiving constant praise, it’s easy to get too comfortable. For this reason we decided to put this game to the test. Find out if this game still lives up to the hype with this jaw dropping review!

This game knows how to reel you in!

As the game loaded, I was greeted by a veluptious woman named Monica. She informed me that I was entering the most authentic poker experience online. Cash games, multi-level tournaments & non commitment games were all at my fingertips. She offered to send free chips to my friends, but I refused since I was in this solo. 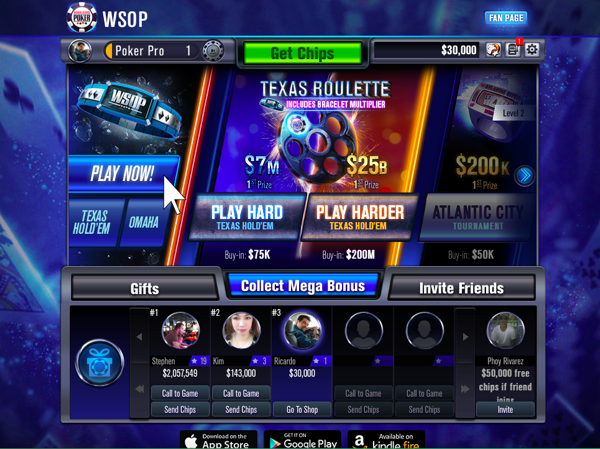 The lobby is packed with options.

After this seductive intro, I was ready to hit the tables. Unfortunatley I still had to jump through a few hoops to get to the lobby. Once I politely declined to like their page & invite friends for free chips, I finally made it to the heart of the game.

I refuse to give out my finances on Facebook.

Armed with $30,000 in chips, I was ready to take on the world. I tried to join a Texas Roulette Tournament. But unfortunately you have to pay to enter. After declining to divulge my credit info, I was back on the hunt for a new game. 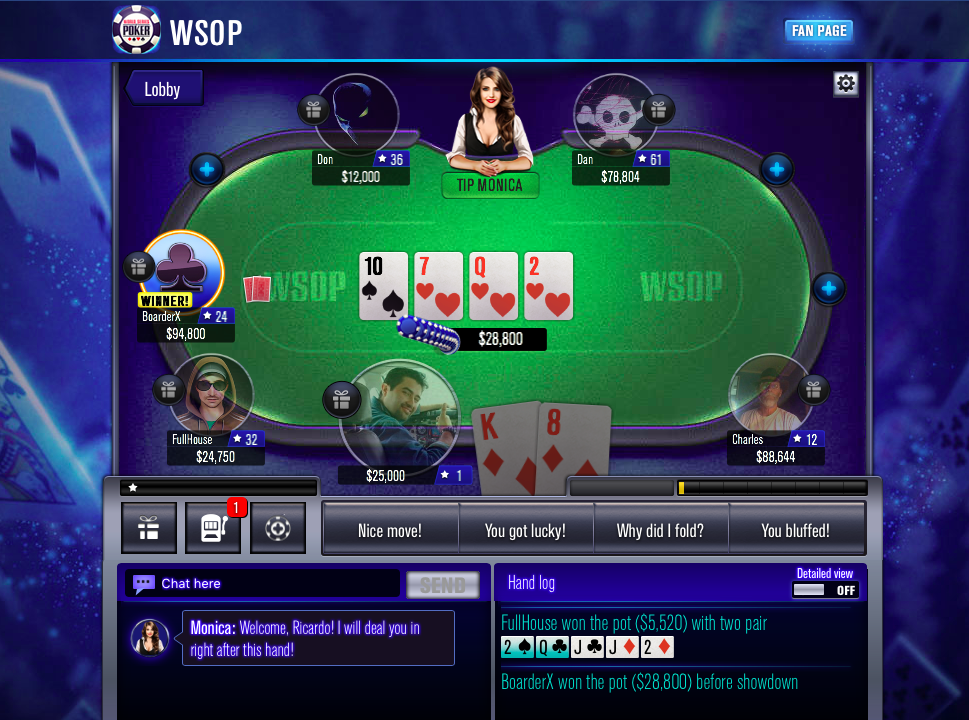 This game was fast paced & packed with adrenaline!

Fortunately, I was able to enter a Texas Hold’em cash game without paying a dime of real money. Once I entered, I quickly realized that this game was the real deal. There were players from around the world competing against me.

These tournaments were filled with a great mixture of players.

After a few rounds I ended up leveling up! Emboldened by this fresh twist of events, I made an epic mistake. I had a golden hand & decided to go all in. Unfortunately I was beaten by Persian & sent packing to the lobby. Since I lost 24,000 in one shot, I decided to be more careful. From there on out I refused to go all in. This solid advice let me continue playing for a few rounds. Unfortunately, these were seasoned players. So my luck ran out rather quickly. After winning & losing multiple rounds I decided to call it a day.

World Series of Poker is an app that throws you into some hardcore poker action. You can choose to play for cash or practice on the sidelines for fake chips. Either way you are pitted up against an interesting mix of players from around the world. The graphics are great & the pace is lightning quick. I can’t find anything negative to say about this game, since you can’t go wrong with a poker game of this caliber. Get in on the action to see for yourself!