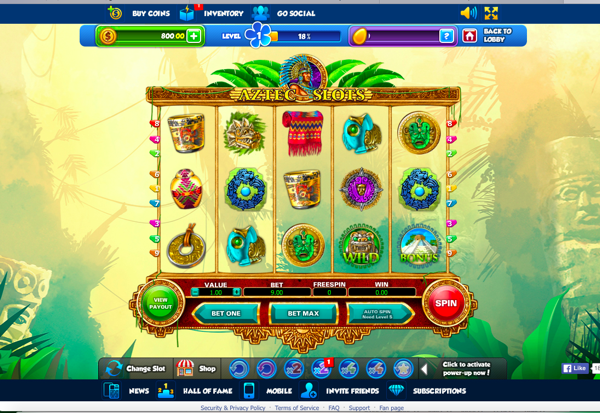 There are many slot games on Facebook, but few have seduced as many players as Slots Farm. With over 2,100,000 likes, this game has captivated the imagination of millions of players. Slots Farm’s fun graphics, intriguing bonuses & live championships continue to pull in more players. This winning combination has amassed millions of loyal followers around the globe. Since this game has such a strong following, we decided that it was time to put it to the test. After diving headfirst into this notorious slot game we were able to create the most in-depth review online. So enjoy the fruits of our labor with this jaw dropping review! 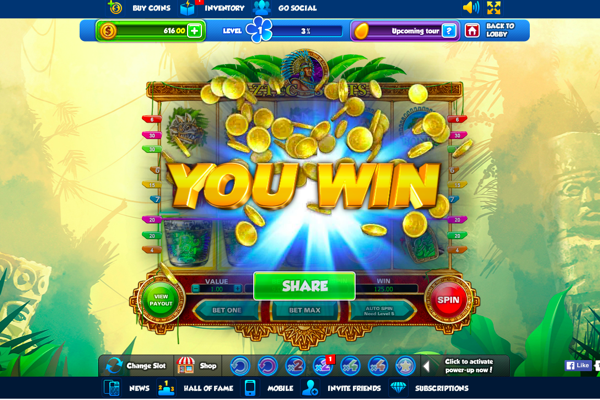 This game starts off with a bang!

After the game loads you are instantly ushered into the lobby to pick your game. Since there was only one option that was unlocked, I chose Aztec Slots. The game put me in an upbeat jungle setting that came to life with gorgeous graphics. On my first spin I managed to win 148 coins! I was off to a good start, but I kept calm & continued spinning. 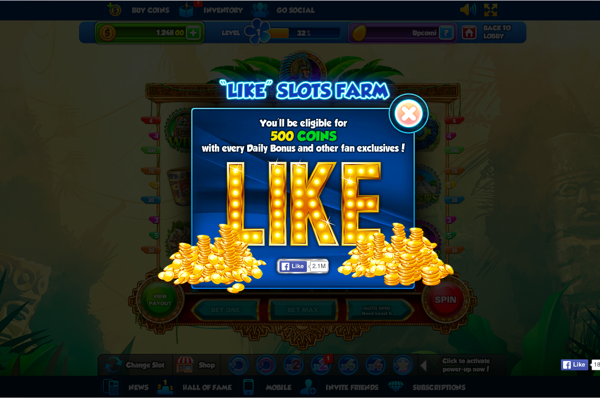 I politely declined this offer.

After winning 4 spins in a row, Slot Farms made me an offer. In the middle of the game an ad popped up. It urged me to like Slot Farm’s page in exchange for 500 coins. While the offer seemed tempting, I had plenty of coins so I continued playing. 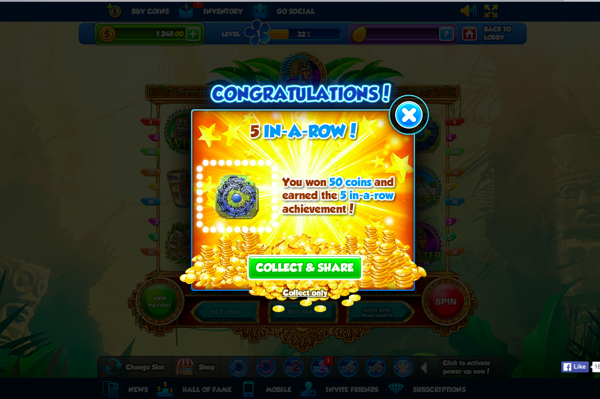 Winning 5 in a row was easier than I thought…

After my next spin I was alerted that I had one 5 spins in a row. This achievement won me 50 coins, & Slot Farm wanted me to share this on my timeline. Slightly perturbed, I declined the offer. I wanted to get back to the game. 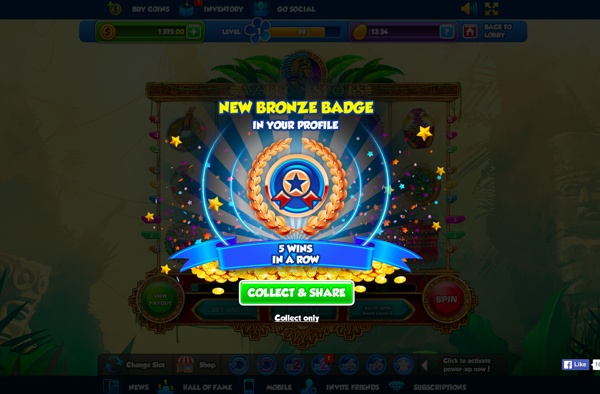 This was starting to get redundant.

After winning multiple times in a row, I received another award. This time it was a bronze badge & Slot Farm once again invited me to share this achievement on my timeline. Unimpressed by this tactic, I quickly refused & got back to the game. 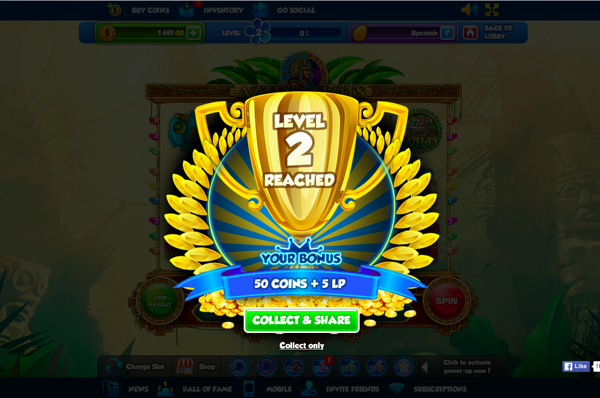 Reaching level two was a piece of cake!

After I few spins, I was alerted that I had won 6 in a row! This was followed by the announcement that I had reached level 2. While this was an impressive feat, I started to doubt the validity of the game. It seemed that most of the spins were winning spins, so winning multiple spins in a row was less than impressive. Even though I was slightly disillusioned by the never ending bombardment of achievements, I continued on. 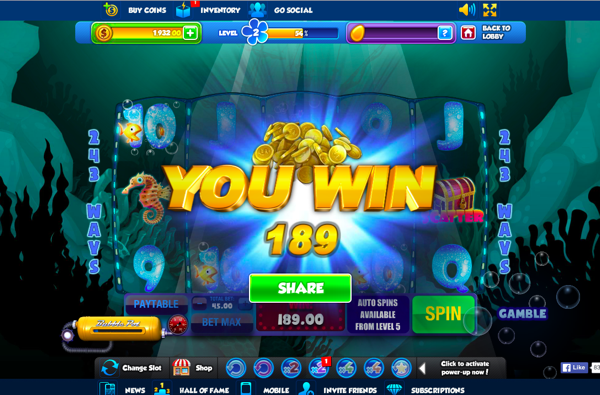 Sea of Gold was absolutely gorgeous! 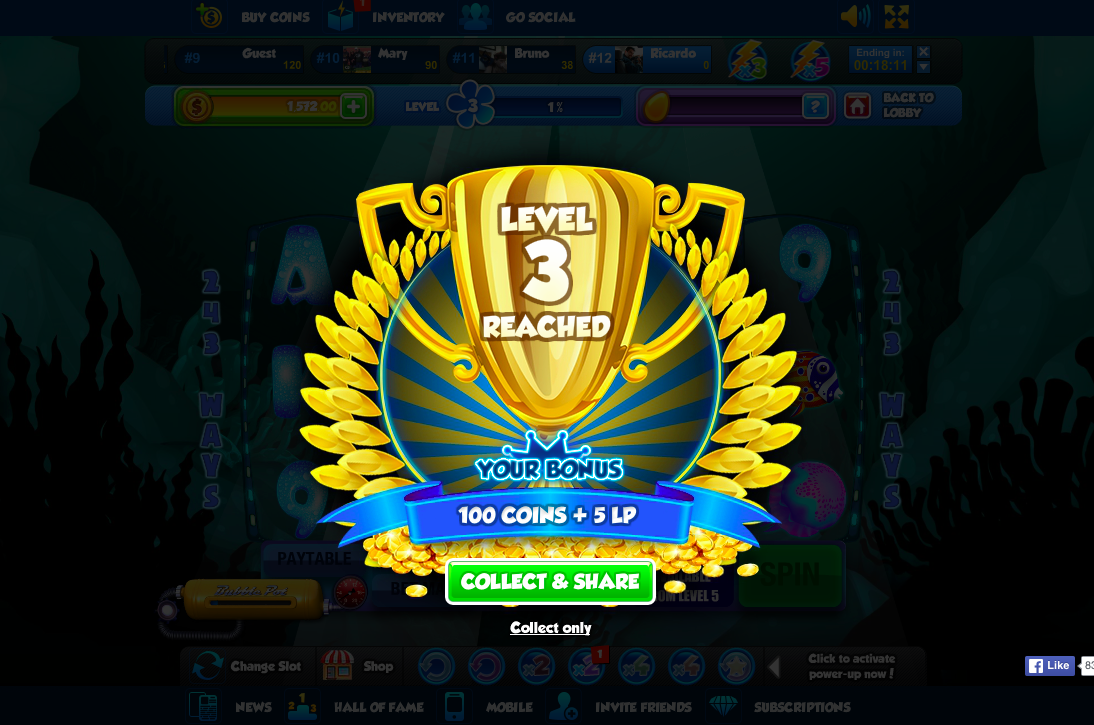 These achievements were getting out of hand..

The game continued to shower me with multiple winning streaks, level ups & achievements. By the end of an hour I was so buttered up by the game that it almost felt shameful to be proud of myself. Slightly disappointed, I quit the game.

Slots Farm is a beautiful game with little to no challenges. After you play for over 5 minutes you quickly realize that almost every spin is a winning spin. This cheapens the experience since it’s impossible to lose. This is a critical flaw of the game. Apart from that the graphics are breathtaking & the levels are fun. It’s a shame that Slot Farms didn’t make the game a little more competitive. If they spent as much time making the game more dynamic as the do pestering people with achievements, this would be the best slot game on Facebook.