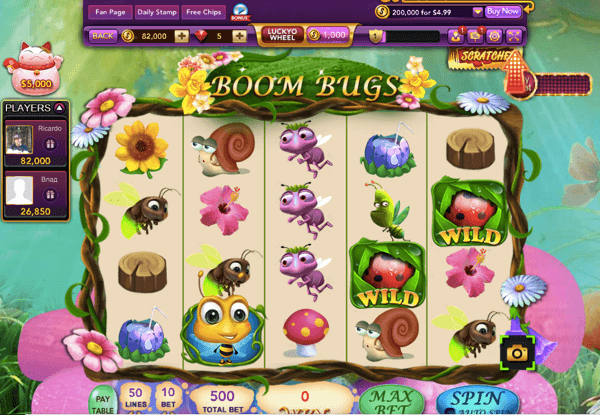 There’s a lot of casino games on Facebook, but none have stolen the spotlight like Luckyo Casino. In just a few months this daring app has seduced thousands of punters from around the world. They currently command the attention of over 10,000 loyal fans. While these numbers aren’t nearly as impressive as Slotomania’s, it’s still admirable for such a new release. They have managed to make our list, since they have become one of the fastest growing casino games on Facebook.

On top of captivating players, this game claims to offer amenities that can’t be found anywhere else. Every day they feature 4 different types of Slot Tournaments with progressive jackpots. They keep players going with Bankruptcy bonuses & an unusually high payout rate. Fans claim that this is the best game of 217, so we decided to see for ourselves. After immersing ourselves in the game, we were able to create the best review online. Prepare to experience Luckyo Casino, it was a wild ride! 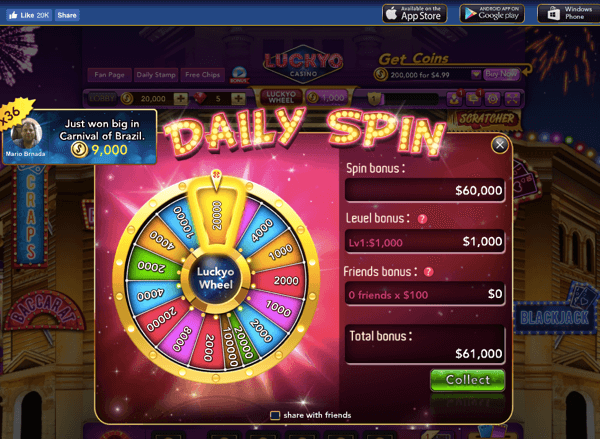 This game started off with a free spin!

As soon as the game loaded, I was immediately thrown into a daily spin. This interesting bonus round won me 20,000 credits, & the game automatically tripled my winnings. This gave me 60,000 extra credits, so I was officially ready to take on the game. From there I was told to collect the daily stamp. Completely oblivious to what this entailed, I curiously accepted this offer. 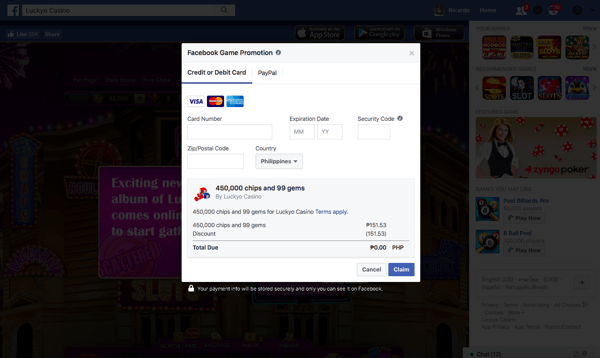 This treacherous move put me on edge.

This won me 1,000 credits, but the surprises were far from over. Just as the stamps faded, I was blasted with another tempting offer. Luckyo Casino was offering me 450,000 chips completely free. Slightly skeptical of this offer, I reluctantly agreed to collect this large sum of chips. As soon as I did, things changed drastically. Instead of a light hearted congratulations, Luckyo Casino was now demanding that I enter my bank information. Completely unwilling to give up my financial information, I frantically clicked out of this misleading offer. 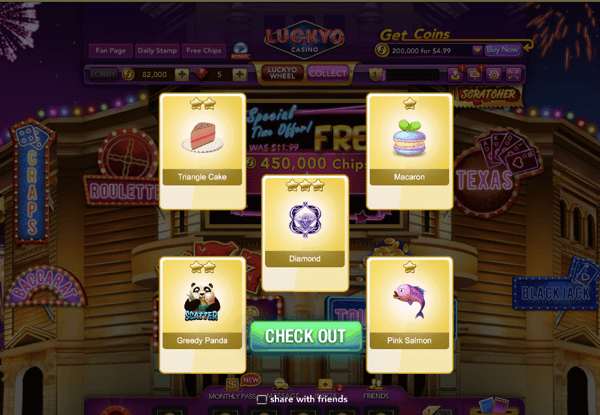 This game kept me guessing…

I thought I made it back to the lobby, but was thrown into yet another bonus game instead. This time I was instructed to pick cards. There were no demands for cash, so I hesitantly complied. As I flipped over the cards, I was greeted with a bizarre mix of results. The card faces ranged from greedy pandas to triangle cake. This mix was perplexing, since they had nothing to do with eachother. Apparently this was part of a broader bonus game, since I was instructed to pick cards when the offer came up again.

By this time I was chomping at the bit to spin, so I tried to make my way to the lobby. There were a myriad of choices to choose from, but in the end I picked Asian-themed Slots. To my dismay, I was informed that I didn’t have the level clearance to access these games. Completely baffled, I tried to find a slot game to play. After picking Boom Bugs, I was finally in a slot game. 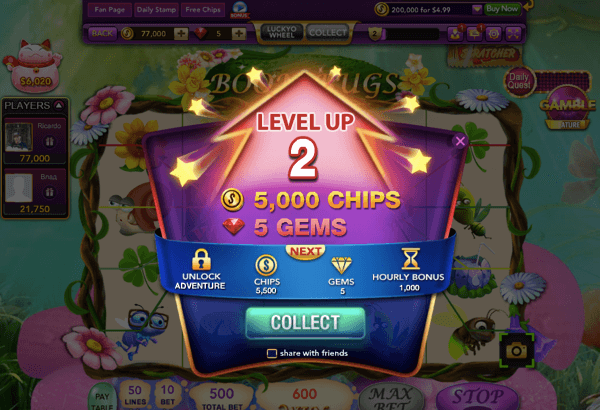 This level up was surprisingly uneventful.

The screen came to life with childlike versions of well known bugs. As they swirled around the screen, I couldn’t help but lose interest. Luckyo Casino’s bonus games were epic, but the gameplay was surprisingly bland. After nearly 20 uneventful spins, I made my first level up. This was a nice victory, but it did little to break up the monotony. 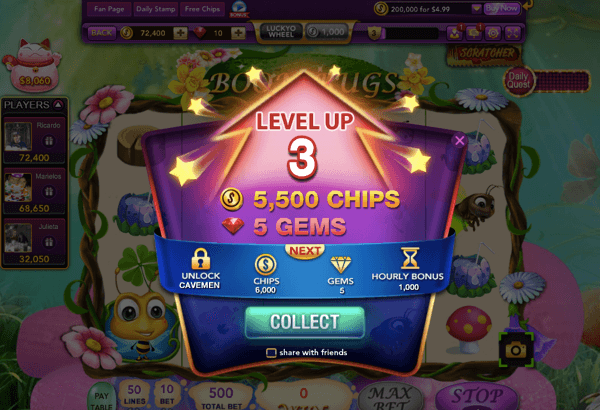 This level was the last straw.

I decided to keep spinning, but was met with little to no variation. The highest win was 900 credits, which wasn’t enough to sustain 500 credit spins. By the time I reached level 3, I was thourhoughly sick of the game. I chose to exit, since there are better games to play on Facebook.

Luckyo Casino starts with a bang, but unfortunately their games don’t back up the epic introduction. While the first bonus games are lively, the games are surprisingly bland. In 3 levels of playing I barely won 10 spins. Most were too low to mention, while one barely reached 1,500 credits.

Every spin is 500 credits minimum, so it doesn’t add up. This shocking disparity was overshadowed by the fact that their games are surprisingly bland. There were no bonus games within the game, which made me want to return to the lobby’s fanfare. Hopefully the developers make a few tweaks, since this game has the potential to be so much more entertaining!