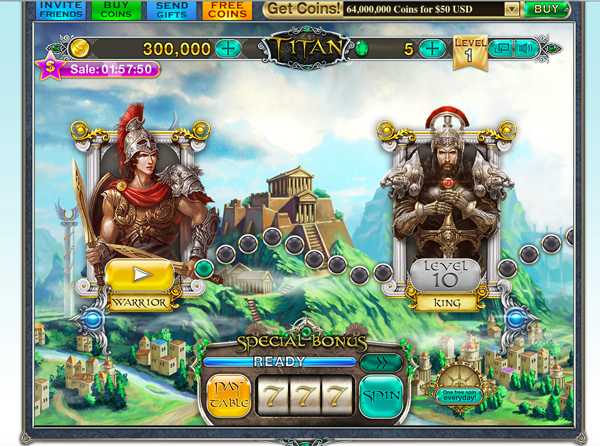 Get a Sneak Peak at Slots – Titan’s Way

Over the years Facebook has become home to many great slot games, including Slots – Titan’s Way. This game was tailor made to be played on iPhones & iPads, but it also crossed over to other platforms. The game features various levels that could enthrall even the most jaded gamer. People around the world claim that this game offers an authentic Vegas gaming experience. When you look at the numbers, this appears to be true. Slots – Titan’s Way has won over 800,000 players on Facebook.

These impressive numbers made it impossible not to shine the spotlight on this casino app. We decided to dive head first into the game to see if it really warrants this type of praise. Enjoy the most intricate review of this wild slot game! 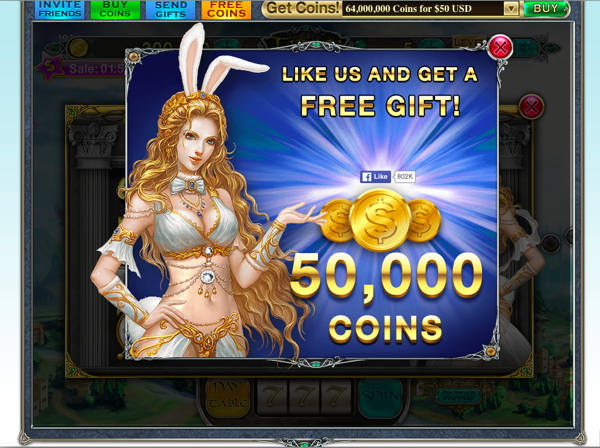 This was an impressive welcome offer!

As the game loaded, I was greeted by a bikini clad Goddess. She announced that I could win 50,000 coins just by liking the app’s Facebook page. Instead of being seduced by this enticing offer, I decided to dive straight into the lobby. I wanted to see what the game was like without accepting any handouts. Once I hit the lobby I was instructed to pick my character. Only the warrior was available, so I went with it. 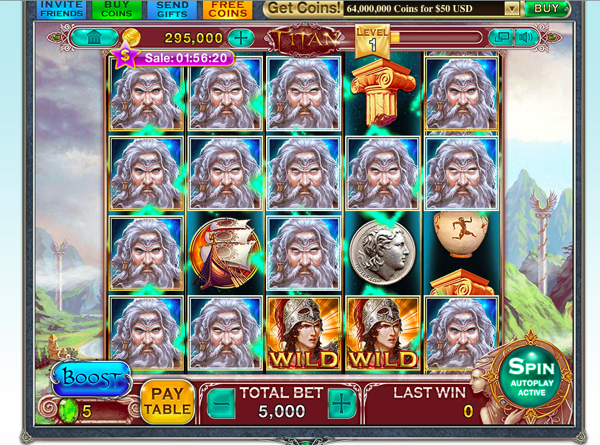 The game was extremely entertaining at first.

After accepting my character I was ushered into a colorful slot game. The screen came to life with Greek Gods & lightning bolts. I quickly discovered that I had 300,000 coins, so I was ready to take on the game. After a few spins, I had already achieved a big win! This netted me 390,000 coins, so I was back in the game. I politely refused to share this experience with my friends & continued to spin. 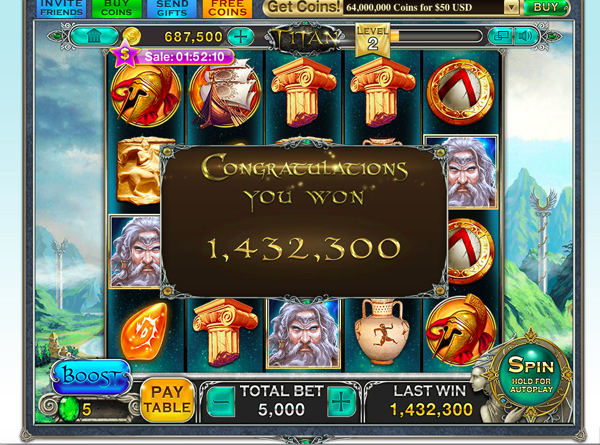 This massive win put me back in the game!

As soon as I spun, the screen came to life with a furious thunder storm. I was alerted that I had just won 10 free spins! From there on every single spin won me a hefty bonus. By the end of the bonus round I had leveled up & accrued 1,432,300 coins! This was a behemoth amount of coins, so I decided to up the anti. Now that I had over 2 million coins I quickly raised my total bet to 25,000 a spin. 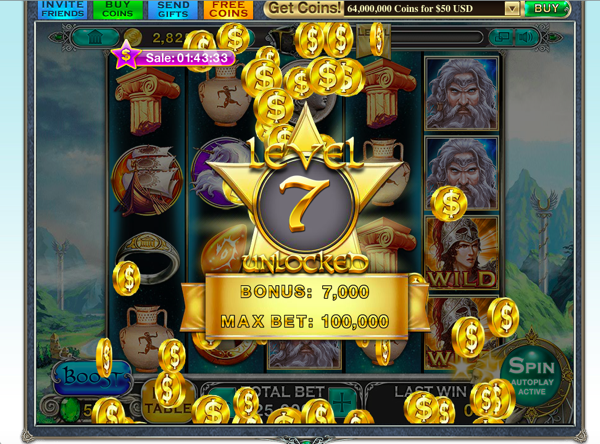 These level ups were the only exciting thing happening!

I spun a few times with little luck. Just as I was about to lose hope I hit a 5 of a kind & leveled up! After a few spins I hadn’t won a thing, but I still managed to reach level 4. The max bets helped me advance quickly, so I stuck with this strategy. Soon I reached level 5, but the game was starting to get repetitive. I was soaring through the levels, but little was happening in between. I reached the 6th & 7th level, but by then I had lost my enthusiasm. I had over 2,800,000 coins, so I decided to quit while I was ahead.

Slots – Titan’s Way is an extremely enticing game. As the wheels spin the screen comes to life with a wide array of Nordic Fokelore. Things get hit by lightning & burst into flames, so there’s always something to stimulate the player. Unfortunately, there’s a massive shortage of variation. While the levels are vibrant, they fail to vary. In the end the only way to tell you have progressed is by looking at the levels. If they would just add a little variety this would be one of our favorite slot games!