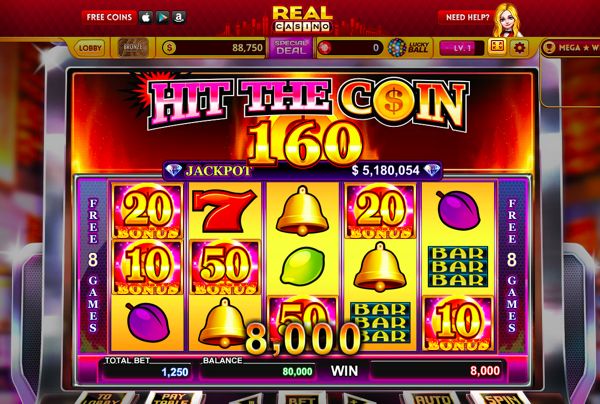 Out of all the new releases on Facebook, Real Casino – Free Slots took the social media network hostage. In a short amount of time, the game accrued over 100,000 monthly players. The game hasn’t been around long, so their fan base is swelling drastically every day. This surprising level of appeal is a growing testament of the quality of their games. While their fans say that this game can’t be beaten, we remained skeptical. 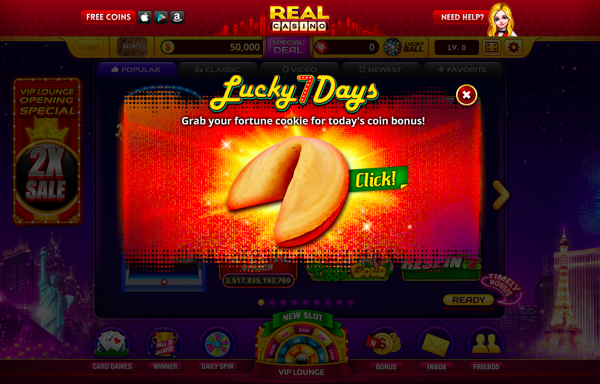 This was an interesting way to start the game!

Before the game could load, I was presented with an interesting offer. A woman offered to give me free coins & access to exclusive events if I liked Real Casino’s Facebook page. Wondering what sort of events they could possibly be hosting, I politely declined the offer. Just when I thought I was about to hit the lobby, I was thrown into an interesting bonus game. I was instructed to grab a fortune cookie to discover my daily coin bonus. Thrilled by the idea, I enthusiastically picked my cookie. This won me 30,000 coins, but I was in no mood to celebrate. I wanted to get to the games, so I proceeded to the lobby. 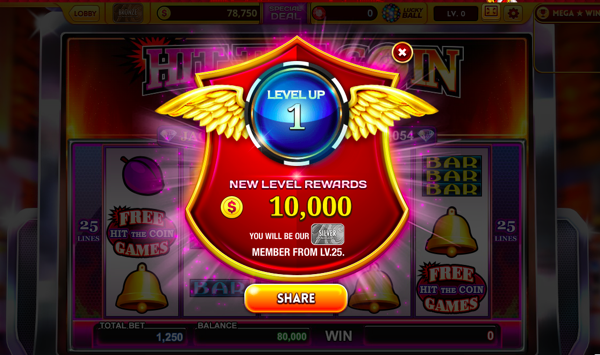 This level up happened on the first spin!

Before I reached the games, Real Casino – Free Slots made me an offer I couldn’t refuse. They asked me if I wanted to play Hit The Coin. When I tried to exit out of the offer, I realized that I couldn’t exit this offer without accepting it. Faced with no other option, I half heartedly dove into Hit the Coin. As soon as the level loaded, a burst of nostalgia hit me like a ton of bricks. This game was extremely retro, & had the feel of a futuristic slot machine from the 80’s. I may not have been won over by the design, but I was dying to start playing. Wasting no time, I started spinning. On the first spin, I leveled up! This won me 10,000 coins, which was a welcome bonus. 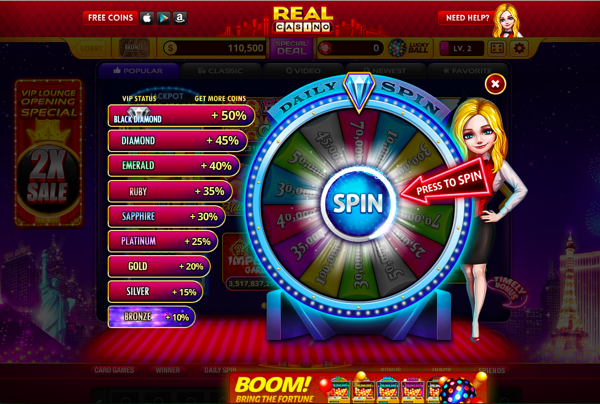 These bonus games came back to back!

Unfazed by this surprisingly easy level up, I tried to get back in the game. Before I could hit the spin button, I was alerted that I had won 10 free spins! This was great, & by the second free spin I had leveled up! This accomplishment helped me rake in 11,000 coins, but it also made me a little leery about the game. These level ups were coming at lightning speeds, but I kept playing anyway. Once the free spins had ended, I had won a total of 9,500 credits! This was great, but that didn’t stop Real Casino – Free Slots from bomarding me with offers. After politely declining two of them, I was thrown into an interesting bonus game. I was instructed to spin the wheel, so I obliged. This won me a shocking 330,400 coins, but I had enough. Without wasting more time, I politely exited the game.

Real Casino – Free Slots is a game that’s bursting at the seams with potential. The games have a classic feel to them, & they are packed with bonuses. The only problem is it feels like they are trying too hard. Instead of letting players spin in peace, this game is full of surprises. Almost every spin brings some sort of prize or bonus. While this is great at first, it gets redundant quickly. Luckily this game is new, so hopefully the producers can make some much needed changes!