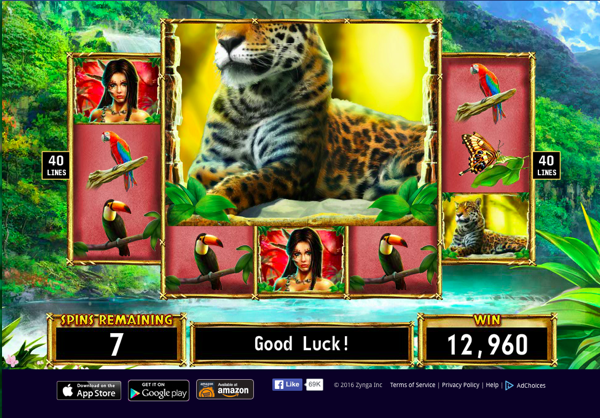 See If Spin It Rich Can Make a Comeback

Out of all Zynga’s releases, Spin It Rich has stolen the show. Over the years, this interactive slot game has seduced millions of players. The game’s heyday is far from active, but they still command a legion of 100,000 monthly users. These loyal fans are fueling a comeback, & we decided to see if the game still lived up to the hype. Coming back after such a long hiatus is no easy feat, & only a Zynga product could pull it off. Come take a look at this classic, it could turn into your next favorite game! 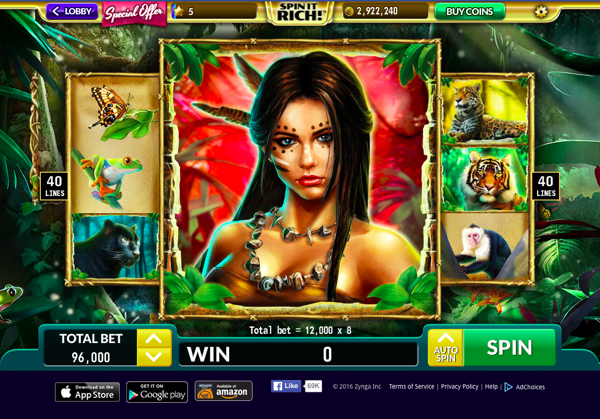 This game instantly won me over!

After the game loaded, I was bombarded with a slew of offers. First they offered to sell me coins, which I politely refused. Then they offered to let me join their loyalty club, & I declined. Even after that they still wanted me to look at the VIP lobby, this was too much for me so I kept closing offers until I finally made it into the lobby. Upon making it to the lobby, I was confronted with a slew of choices. The one that jumped out at me was Jungle Goddess, its seductive undertones were highlighted by an exotic style. After picking this game, I wasn’t disappointed. I was greeted by a beautiful Amazonian woman who was surrounded by monkeys & panthers. Even though the game was years old, the graphics were still on par. 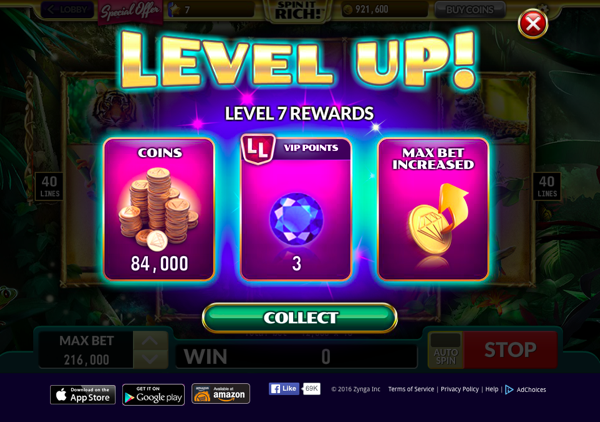 These level ups came fast, but the order was puzzling.

I had 2,922,000 coins, so I was ready to dive into the game. This seamed like a massive amount of loot to start with, until I saw the cost per spin. Luckily I had a lot of coins, because each spin cost 96,000. After a few uneventful spins, I leveled up! This let me increase my bet, which I did just to get things moving. At 216,000 coins a spin, my credit was disappearing fast. I kept spinning, but I wasn’t winning enough to justify these bold moves. Just when I was about to lower my bet, I leveled up again! For some bizarre reason, I was already at level 7. Even though I was puzzled, I was in no position to ask questions. 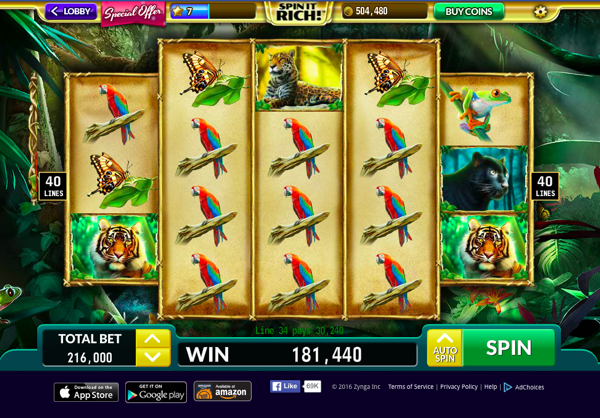 My credits were running dangerously low…

Just as I accepted my bonus money, I was invited to participate in two new games. They were Ocean’s Bounty & Elvis, which were both equally unattractive to me. Determined to stay loyal, I stuck with Jungle Goddess. I was back in the game, but this didn’t stop my credits from going up in smoke. I was down to 726,120 coins, so that allowed me 3 spins more. I knew that I had my back up against the wall, I had two choices, lower my bet or keep spinning. Since all my other spins had been failures, I had to go big or go home. I continued spinning at 216,000 a spin. 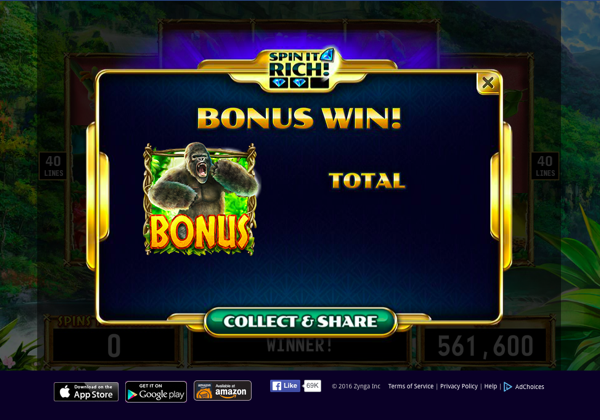 Even this big win wasn’t enough to save me.

On the first spin I won 25,000 coins, which paled in comparison to what I betted. The second spin was better, I won 181,440. Just as I was about to lose hope, I was thrown into a bonus game. I was instructed to pick a canoe, which gave me 9 bonus spins! By the end of the bonus round I had won 561,600 coins! This was a monumental feat, but it didn’t stop me from running through the coins. Spin It Rich happily offered to sell me coins, but I declined. It was time to move onto a new game, this one didn’t win me over.

Spin It Rich is overflowing with potential, but a few key details destroy the experience. It costs way too much coins to spin, so the starting amount disappears in the blink of an eye. Just when I was starting to get thrown into bonus games, I ran out of coins. There was literally no action on my spins until I was on the brink of runningg out of coins. If they would have started out with the same energy, the game would have won me over. Unfortunately, by the time the game warms up you are out of coins.