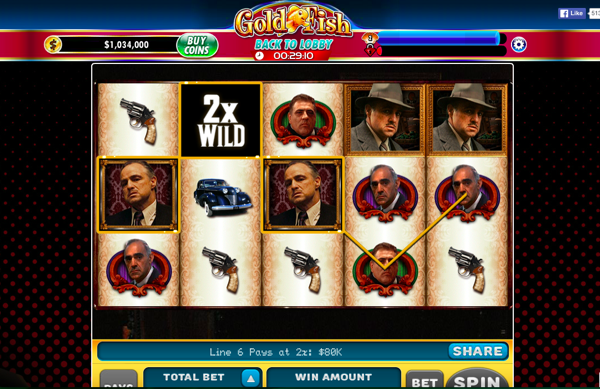 According to fans, Gold Fish Casino Slots should be the first stop for anyone seeking adventure. This groundbreaking slot game has made a name for itself as one of the most entertaining casino themes on Facebook. The have amassed over 500,000 likes, so quite a few players have been thrilled by their experience. Even though it has received rave reviews, we remain skeptical until we have gone along for the ride. It’s easy for a game to receive unwarranted praise when people aren’t aware of better options. For this reason we decided to put this game through our rigorous testing. So enjoy the fruits of our labor as we explore whether this game lives up to the hype! 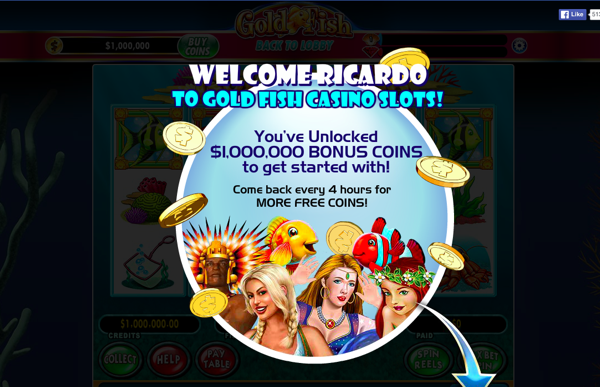 From the start you know you are on the right track.

As soon as you join you are greeted by an interesting collection of characters. They are letting you know that you have unlocked 1,000,000 bonus coins! If that wasn’t good enough, you can check back every 4 hours to receive more coins. This was a great start, so I quickly dove head first into the game. 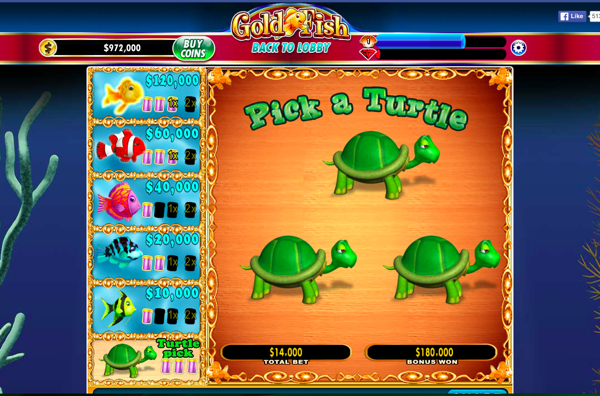 These bonus games are wildly entertaining! 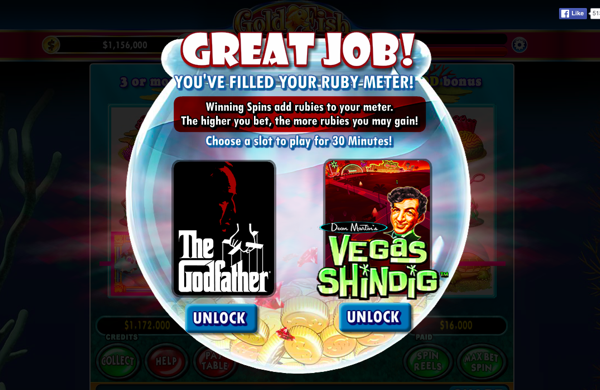 It was time to join the mob…

Upon completing a few more spins, I was alerted that my ruby meter was full. This meant that I could play one of two levels for 30 minutes: The Godfather or Vegas Shindig. I have a taste for danger so I picked the Godfather. 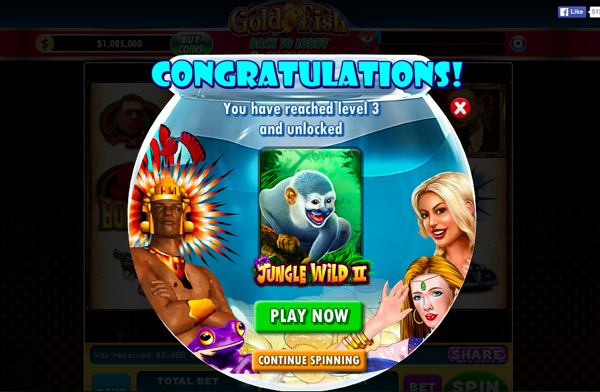 The Godfather proved to be an interesting theme. The minimum bet was 40,000 credits, but I was ready to take the risk. As I started spinning in the mob underworld, I was told that I had leveled up! This unlocked a new level called Jungle Wild II. However, I had just joined the mob, so I decided to remain loyal to this level. 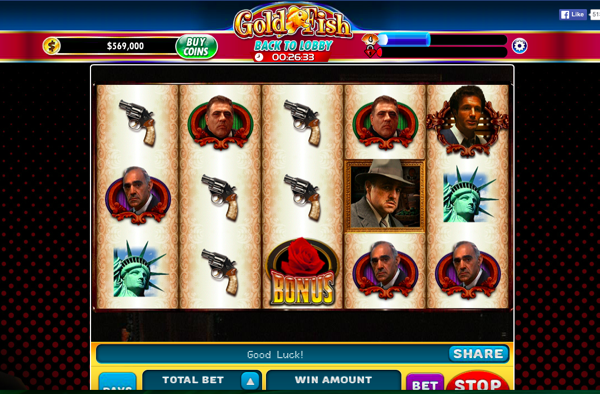 This level was intriguing!

After a few more spins, my credits were depleting rapidly. Just as I was about to join the jungle level I was alerted that I was now elegible for tournaments! This was a nice offer, but I preferred to continue solo. 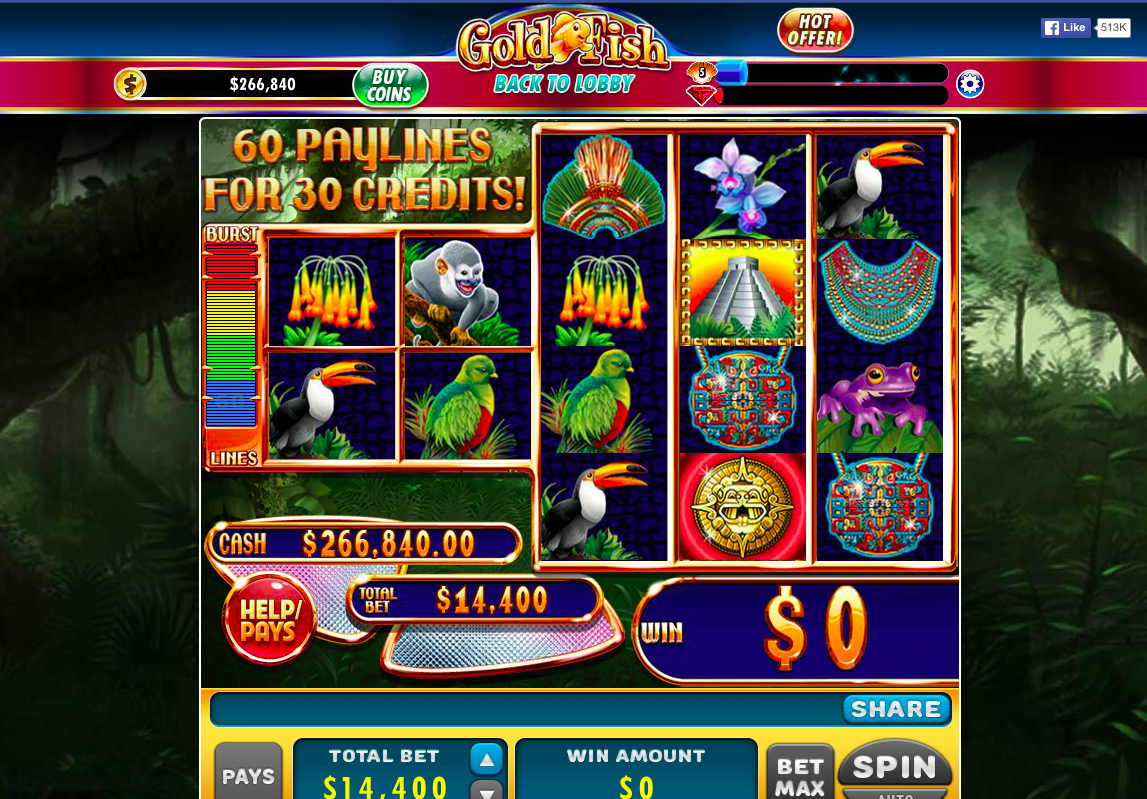 The graphics weren’t as good, but this level was fun to play.

I quickly returned to the lobby & joined Jungle Wild II. At 14,000 minimum bets, this game was a lot easier on my dwindling budget. 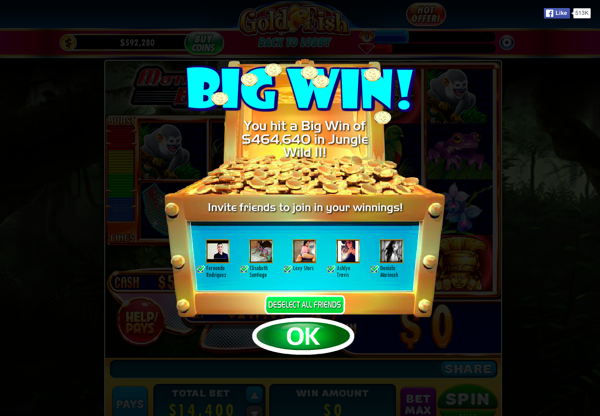 This huge victory put me back in the game.

Just as I was getting into the swing of things, I won 11 free spins! These lead to me winning over 464,000 credits! I was back in the game. I continued playing for over an hour. Everytime I was about to quit, I was awarded more free spins that led to me winning more credits!

Gold Fish Casino Slots is extremely enjoyable to play. You are constantly surprised with fun bonus levels & new themes. Even though the basic rounds have lackluster graphics, the rounds you unlock make up for it. Overall it’s a very enjoyable game that anyone can get into!