Why to Visit Nevada’s Burning Man Festival This Year? 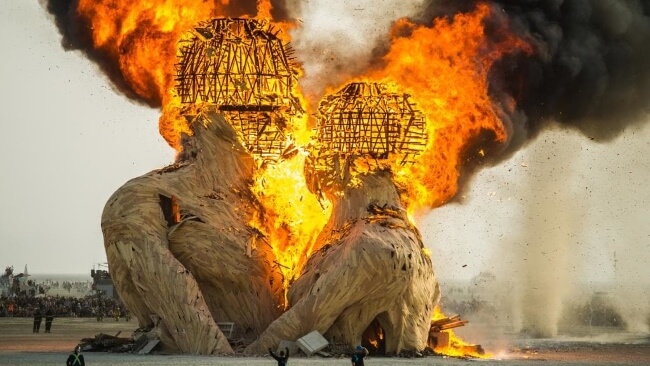 Just like always, Burning Man, art, and community event brings tens of thousands of people again this year. This festival began in 1986 when Larry Harvey, a renowned artist of his time carved up and burned down a wooden man’s sculpture and took it into the desert in Nevada. This incident caused an uprising of the most famous event seen in history- the Burning Man! Every year new participants participate in the event and the numbers have increased surpassing the 50000 marks in 2010.

Since 1990, this event has been taking place in the Black Rock Desert in Nevada. Many big shots and hotshots also participate in this event. With the attraction of thousands of people, the Burning Man gets its funding from world-class billionaires such as Mark Zuckerberg, and Elon Musk. This year the dates for the event falls from 25th August to 2nd September. 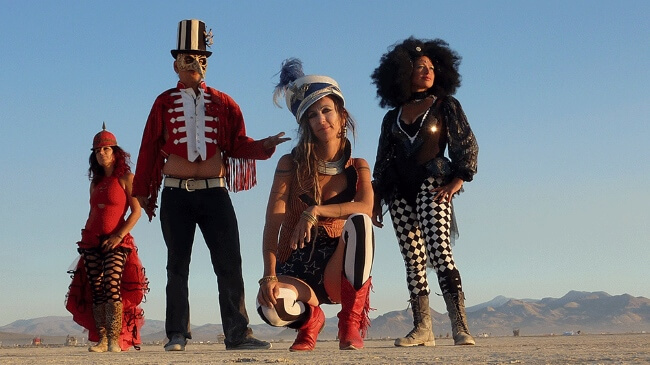 The Burning Man is an event for art and community lovers. The plethora of masses that gather around here admire the art and the beauty of it. Black Rock City is also known as the paradise city for art. It also has a variety of amenities and facilities such as hospitals, bars, a post office, and even a private airport. Coffee and ice-cream are the only things traded by the commerce-free city.

The ‘Burners’ or the participants showcase their exemplary skills in art and drawing. The participants are dressed in wild costumes to make their art evolve to the realm of a masterpiece. The musicals in the event are also alluring and calming to hear. Of course, there is no event without the appearance of the thing after which the event is named and hence, lights are flashed at intervals to portray the famous burning man’s sculpture.

How to Visit the Event? 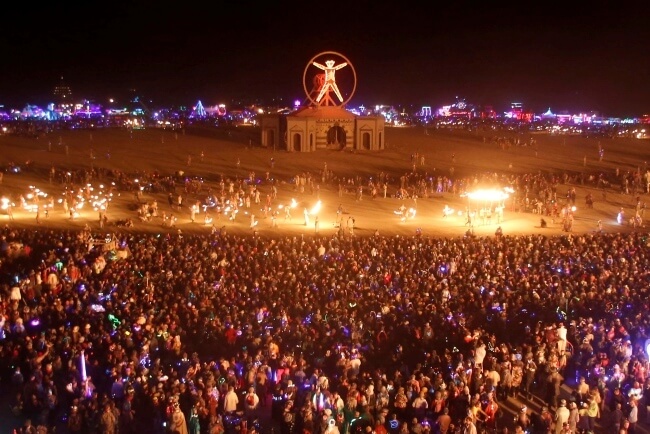 Participants fill the Playa as approximately 70,000 people from all over the world gather for the 30th annual Burning Man arts and music festival in the Black Rock Desert of Nevada, September 3, 2016.[/caption]

Even though the idea of it being a free event crosses everybody’s mind, the event, however, is not for free. There is a careful and gradual application process that takes place with an attached application fee. The main event costs you $425-$1000. There however is another way to fill the application form at the price of just$190 but then certain restrictions fall before your path. It becomes a necessity for all participants to have a ticket.

You can reach the site through road or take a flight to the private airport that is installed in the area.

Dogs, guns, and fireworks of any kind are strictly prohibited to make other people feel safe and secure.

Bicycle or on foot are the preferred means of transport and there is a restriction on vehicles to be drive n in the venue due to numerous reported accidents before. A minimum speed of 5 miles per hour must be maintained.

What to Expect From this year’s Event? 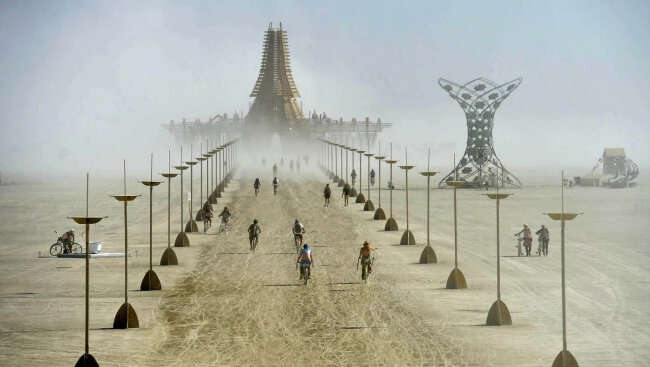 This year the Burning Man has a raging mass with thousands joining the event and even some of the celebrities are going to be there so the expectations from a normal participant are sky high and everything is being put to expect minimal disappointment.

There is going to be absolute madness this year in the Burning Man festival due to the presence of thousands and some world-renowned celebrities as well.

People are expecting greater results than the previous year’s event due to the abnormal increase in this year’s participants. The organizers are putting their best and no expenses are being sparred for this because they have a feeling of this year’s event being magnificent. 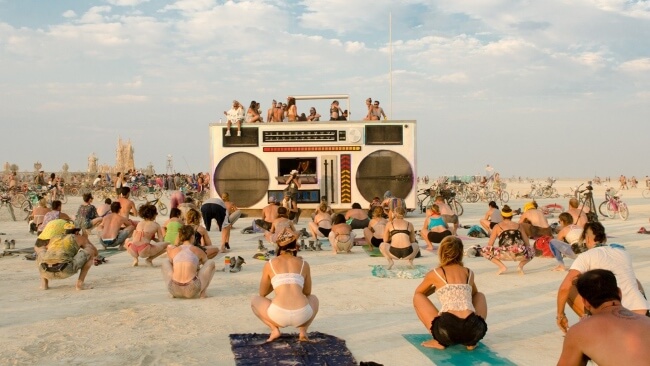 1. The theme this year in Burning Man is Metamorphoses. Participants must showcase their exemplary and artistic efforts in the art to the ordinary viewers since they might have made a masterpiece and hadn’t realized themselves.

2. There are many different installations this year by the show organizers of the Burning Man this year. Some of the illustrations include – the Archaeopteryx by Nicholas De Bruyne, Bee Divine Hive Temple from a collection of artists, and the Awful Gas and Snack by Matthew Gerring and Crank Factory. Some other artworks include the Carousel Zarya by Carousel Zarya and the famous Bee or Not to Be by Mr. and Mrs. Ferguson among many other installations.

Those who are interested in the event can create their artistic installations or help build Black Rock City. Those who are participating for the first time are encouraged to enjoy the festival to its fullest by showcasing your skills and hard work. The venue building is three weeks behind the scheduled date.

There are many participation videos for those who are entering the event the first time. The purpose of these videos is mainly entertainment, to re-live the event, to enlighten and educate children about the Burning Man.

What is there in Future 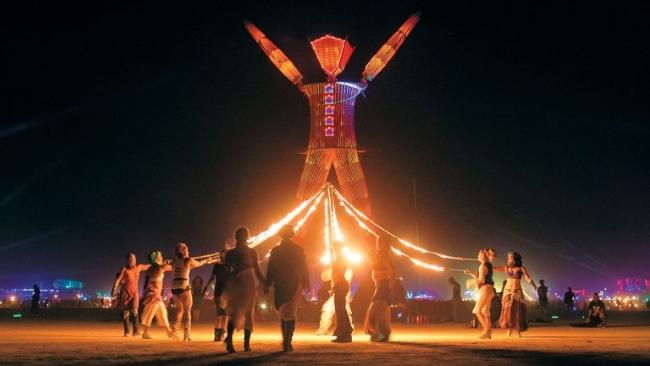 The popularity of the Burning Mann is growing every year and each year witnesses a remarkable surge in the number of participants. The organizers every year are always trying to exceed their efforts a. form the previous year and make the event more safe, secure and enjoyable. There is no stopping this event because every year many participants show up in surplus due to its popularity. Some issues have also been raised regarding the environmental impact and safety and the organizers are trying their best to maintain their plea.