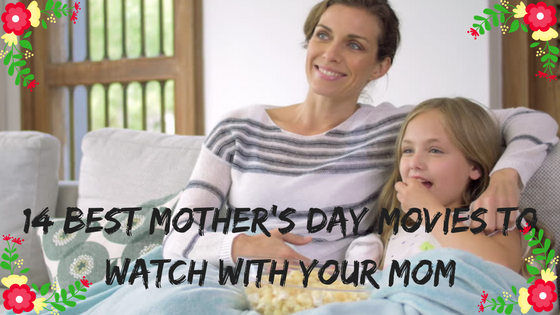 14 Best Mother’s Day Movies to Watch With Your Mom

“God could not be everywhere, and therefore he made mothers”- Rudyard Kipling

The only gift any mom would ask for is love from her child. While most of you are thinking of getting some special gifts for Moms on Mother’s Day, here is another great way to make this day a memorable one by watching some of the Mother’s Day movies together with your mom. Now have some popcorn or prepare in advance a special dish what she likes (remember to do the dishes yourself as your mom too needs to relax). Get the DVD of the movie or watch on Youtube, Netflix or Putlocker. So lay your head on mom’s shoulder as you did when as kid, or hug/wrap her around with your arms, cosy..isn’t it…all prepared? Here are the 14 best Mother’s Day movies to watch now.

Mother’s Day is a 2016 American romantic comedy film directed by Garry Marshall and written by Marshall, Tom Hines, Lily Hollander, Anya Kochoff-Romano and Matt Walker. It was released in the United States on April 29, 2016, by Open Road Films and grossed $43 million worldwide.

The story goes as Mother’s Day draws close, a group of seemingly unconnected people in Atlanta come to terms with the relationships they have with their mothers. Sandy (Jennifer Aniston) is a divorced mother of two boys whose ex-husband has recently remarried a younger woman named Tina (Shay Mitchell). Miranda (Julia Roberts) is an accomplished writer who gave up her only child, Kristin (Britt Robertson), for adoption at birth. But as a grown-up Kristin prepares herself for marriage, she begins to contemplate the missing part in her life and is encouraged by her friend, Jesse (Kate Hudson), to go out and find her mother. Meanwhile, Jesse and Gabi, who never see their mother, are surprised by their parents when they come to visit and must come to terms with their failing relationship. Watch full movie here.

The Family Stone is a 2005 American comedy-drama film written and directed by Thomas Bezucha. The plot follows the Christmas holiday misadventures of the Stone family in a small New England town when the eldest son, played by Mulroney, brings his uptight girlfriend (played by Parker) home with the intention of proposing to her with a cherished heirloom ring. Overwhelmed by the hostile reception, she begs her sister to join her for emotional support, triggering further complications.

The Family Stone was released in North America on November 26, 2005 and was a moderate critical and commercial success, with a worldwide gross of over US$92.2 million. While Parker was nominated for a Golden Globe Award for her performance, Keaton, Nelson and McAdams garnered a Satellite Award nomination each. In addition, McAdams was awarded a Teen Choice Award the following year. Watch the full movie here.

3. Cheaper by the Dozen

Cheaper by the Dozen is a 2003 American family comedy film which takes its title from the autobiographical book of the same name by Frank B. Gilbreth, Jr. and Ernestine Gilbreth Carey, but despite the title and the concept of a family with twelve children, ranging from 5 year old Nigel & Kyle to 22 year old Nora, the film bears no resemblance to the book nor its original film adaptation, although it is mentioned that the mother’s maiden name is Gilbreth. The film was directed by Shawn Levy, narrated by Bonnie Hunt, and starring Steve Martin. The film was released on December 25, 2003 by 20th Century Fox.

Here Tom Baker is a football coach at a small rural college in Midland, Indiana, where he raised twelve children, and his wife, Kate, has written her story in a book and hopes to send it to her friend to publish the book. Tom unexpectedly receives an offer from his old friend and football teammate Shake McGuire to coach at his alma mater in his hometown of Evanston, Illinois. Tom accepts the offer, and demands all the children vote on moving. Despite losing the vote, Tom has the entire family return to Evanston for a better home and space. The atmosphere at the Bakers’ new house is tense and the situation at school is even worse. Now find here what happens next by watching the full movie here.

Hope Floats is a 1998 American romantic drama film directed by Forest Whitaker and starring Sandra Bullock, Harry Connick, Jr., and Gena Rowlands. Birdee (Bullock) is an unassuming housewife whose life is disrupted when her husband (Michael Pare) reveals his infidelity to her on a Ricki Lake-style talk show. She goes home to her mother (Rowlands) and the small town in which she grew up, where everyone knows of her televised marital collapse. Meanwhile, an old friend, Justin (Connick, Jr.), has entered her life, sparking a romance. While Justin’s intentions are clear and good, Birdee struggles with the decision to let him fully into her life. Watch the full movie here and know what happens next.

Freaky Friday is a 2003 American fantasy-comedy, teen film remake directed by Mark Waters and written by Heather Hach and Leslie Dixon, based on the novel of the same name by Mary Rodgers. The film was released in theaters on August 6, 2003 by Walt Disney Pictures and Buena Vista Pictures.

In the movie single mother Tess Coleman (Jamie Lee Curtis) and her teenage daughter Anna (Lindsay Lohan) couldn’t be more different, and it is driving them both insane. After receiving cryptic fortunes at a Chinese restaurant, the two wake up the next day to discover that they have somehow switched bodies. Unable to switch back, they are forced to masquerade as one another until a solution can be found. In the process, they develop a new sense of respect and understanding for one another. Watch this movie now.

Terms of Endearment is a 1983 American comedy-drama film adapted from Larry McMurtry’s eponymous 1975 novel, directed, written, and produced by James L. Brooks and starring Shirley MacLaine, Debra Winger, Jack Nicholson, Danny DeVito, Jeff Daniels, and John Lithgow. The film covers 30 years of the relationship between Aurora Greenway (MacLaine) and her daughter Emma (Winger).
This classic movie which swept the Oscars the following year, and when mother and daughter find their footing in love one of them gets terminal cancer — and you are sure to cry at that time. Watch the full movie here.

7. The Kids Are All Right

Gloria is a 1980 American crime thriller film written and directed by John Cassavetes. It tells the story of a gangster’s girlfriend who goes on the run with a young boy who is being hunted by the mob for information he may or may not have. It stars Gena Rowlands, Julie Carmen, Buck Henry, and John Adames.

Gloria, a former mobster’s girlfriend, tells Jeri that she doesn’t like kids but begrudgingly agrees. The Dawns’ daughter Carmen refuses to leave and locks herself in the bathroom, so Gloria takes only their young son Phil to her apartment – narrowly missing the hit squad.
After hearing loud shotgun blasts from the Dawns’ apartment, a visibly shaken Gloria decides that she and Phil must go into hiding. She quickly packs a bag, grabs her cat, and leaves the building with Phil, just as a police SWAT team are entering with heavy weapons. Meanwhile, a crowd of onlookers and news reporters has gathered in front of the building, and a cameraman captures a picture of Gloria leaving the building with Phil. Watch the movie here all free.

The Fighter is a 2010 American biographical sports drama film directed by David O. Russell, and starring Mark Wahlberg, Christian Bale, Amy Adams and Melissa Leo. The film centers on the lives of professional boxer Micky Ward (Wahlberg) and his older half-brother Dicky Eklund (Bale). The film was released in select North American theaters on December 17, 2010 and was nominated for seven Academy Awards. The boxing manager Melissa Leo beats up her husband, disciplines frizzy-haired intruders and fiercely protects her turf in this movie. Now watch online here all free

Mommie Dearest is a 1981 American biographical melodrama film which depicts the childhood of Christina Crawford and how she was allegedly abused as a little girl by her adoptive mother, actress Joan Crawford. Starring Faye Dunaway, Mara Hobel, and Diana Scarwid, the film was directed by Frank Perry.
Joan Crawford is a driven actress and compulsively clean housekeeper who tries to control the lives of those around her as tightly as she controls herself. To prepare for a work day at MGM Studios, she rises at 4:00 a.m. and engages in a strict morning ritual: scrubbing her face and arms with soap and boiling hot water, then plunging her face into a bowl of rubbing alcohol and ice to close the pores. Watch the film here online

Places in the Heart is a 1984 American drama film written and directed by Robert Benton about a U.S. Depression-era Texas widow who tries to save the family farm with the help of a blind white man and a poor black man. The film stars Sally Field, Lindsay Crouse, Ed Harris, Ray Baker, Amy Madigan,John Malkovich,Danny Glover,Jerry Haynes and Terry O’Quinn. It was filmed in Waxahachie, Texas. Field won the Academy Award for Best Actress for her performance. As a Depression-era widow beating back the bank’s advances on her Texas cotton farm, Field is as inspiring as mothers get. Watch the full movie here

Keke Palmer plays a spelling prodigy who overcomes a litany of obstacles to compete in the state championship, including the disapproval of her mother (played by Angela Bassett), a widow who is concerned for her daughter’s well-being. Eventually they come to an understanding and the end is absolutely heart warming. Watch the full movie here

This not Mermaids slot game but a movie to enjoy. It is a 1990 American comedy-drama film directed by Richard Benjamin and starring Cher, Bob Hoskins, Winona Ryder (who was nominated for a Golden Globe Award for best supporting actress for her role), and Christina Ricci in her first film role. It is based on the 1986 novel of the same title written by Patty Dann. It was shot in and around the town of Ipswich, Massachusetts and Pawtucket, Rhode Island.
Here Cher is a single mom who moves her kids around every time she breaks up with a man — but they sure make up a wonderful one. Consider this scene “set the table” goals. Watch full movie here

This is animated movie from Walt Disney. The reason I put this movie in this list is because animals too love their mothers. After all living beings have mothers and share the same love and feeling.

Dumbo is based upon the storyline written by Helen Aberson and illustrated by Harold Pearl for the prototype of a novelty toy (“Roll-a-Book”).The main character is Jumbo Jr., a semi-anthropomorphic elephant who is cruelly nicknamed “Dumbo”. He is ridiculed for his big ears, but in fact he is capable of flying by using his ears as wings. Throughout most of the film, his only true friend, aside from his mother, is the mouse, Timothy – a relationship parodying the stereotypical animosity between mice and elephants.
Dumbo was released on October 23, 1941. At 64 minutes, it is one of Disney’s shortest animated features. Sound was recorded conventionally using the RCA System. One voice was synthesized using the Sonovox system, but it, too, was recorded using the RCA System. Watch the love of baby elephant towards his mother here for free.

Besides these wonderful 14 movies to watch on mother’s day you can grab the best of deals and discounts at the casinos and take your mom to a grand buffet or play slots to have some winning moments to enjoy with your mum.