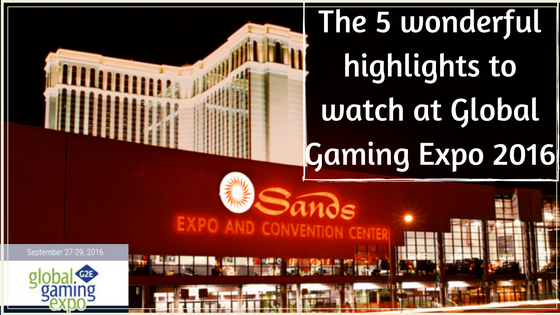 The 5 Wonderful Highlights to Watch at Global Gaming Expo 2020

Global Gaming Expo 2016 opened this Monday on September 26th at the Sands Expo and Convention Center in Las Vegas. It is the world’s biggest and most anticipated industry event where you can know about educational opportunities in multiple venues, look out for the exhibition where hundreds of new products and innovations from industry leaders like IGT, Scientific Games, Aristocrat and more are revealed. Also you can come to know of the great developments from up and coming stars like Gamblit with their innovative and millennial-fetching virtual reality gambling game, “The Brookhaven Experiment” in conjunction with Phosphor Games.

This expo is organized by Reed Expositions and is presented by the American Gaming Association (AGA) where high scale conference is held and the participants are gaming executives, buyers, and industry professionals.

The largest exhibitor will be IGT with some 24,995 sq ft of floor space on the second level of Sands Expo which offers nearly 200,000 sq ft of space and will feature over 450 individual exhibitors. Other notable names with large exhibits include Scientific games, Konami Gaming, Novomatic, Aruze, Ainsworth, Everi, Merkur, and Interblock among others.

So what will be there on discussion and what new developments and things are coming up in this Gaming Expo. It is the curiosity, right. You will love to know the latest going on things and the main topics on focus by gaming industry experts. Here are the 5 wonderful highlights to watch at Global Gaming Expo 2016 (G2E)- Believe me you will love to know about them.

1. Sports Betting to be Legalized

Sports betting is the topic of focus here at Global Gaming Expo 2016 as they plan to spearhead the development of a lobbying coalition that will advocate for federal sports betting legislation. G2E will feature four panels addressing various aspects of sports betting, including integrity monitoring and potential regulatory frameworks.

The 1992 federal law made it illegal for any person or governmental entity that wasn’t already legally doing so to sponsor, operate, advertise, promote, license, or authorize most forms of sports wagering, including the forms of single-game betting popularized by Nevada sportsbooks.

The industry leaders discussed the market for mobile sports betting, including the ways in which the convenience of an in-hand sportsbook on your smartphone has driven growth. Nevad a sports betting has increasingly started to move to mobile technology. The industry experts will focus on opportunities for legalizing sports betting outside of Nevada, and how it could positively benefit broadcasters, advertisers and the sports leagues themselves.

Also some of the world’s foremost sports data experts will illuminate the ways big data technology is used protect the integrity of sports betting markets and how it can shape regulation. The goal of the coalition is to bring about a legal, regulated sports betting framework in America.

At the Global Gaming Expo in Las Vegas, designers are constantly looking for new ways to attract more players and this year they are targeting towards more females. One new game coming out is modelled after the popular ABC TV show “The Bachelor,” complete with roses and a fantasy suite to attract female players.

3. Skill Based Games still on the Spotlight

Though games of chance continue to dominate casino action, but games in which skill plays a factor, an effort to draw younger players into casinos, is getting a lot of attention at the Global Gaming Expo 2016. Zombies is the word for it and the games like “Into the Dead,” the California-based Gamblit Gaming’s partnership with PikPok, which has had more than 60 million downloads since it was launched in 2012 by PikPok is on the show.

In a move to encourage the casino industry to make slots more like video games that millennials have grown up playing, the Nevada Legislature opened the door for skill-based games in 2015. Regulations approved by the Nevada Gaming commission later that year created three distinct game categories: traditional chance-based games; skill games, where a player’s abilities largely govern the outcome; and hybrid games, where a combination of skill and chance affect the result.

Designing games that are simple to understand, intuitive to play, yet entertaining enough to retain players is the challenge Gamblit and other companies in the industry face. Gamblit’s booth at the G2E would showcase how casinos could design a distinctive experience for a congregation of skill-based games. Also G2E officials estimate that skill-based games could potentially become an estimated $80 billion market.

According to press release Caesars Entertainment is among the first operators to agree to place Gamblit’s machines in Nevada in field trials, pending regulatory approval. After the field trial, Caesars anticipates placing 125 Gamblit gaming positions into multiple Nevada properties, according to a Sept. 7 news release. Caesars and Gamblit hope to introduce more than 100 positions into additional markets beginning in early 2017 and expand the presence of these games across the Caesars network, the release said.

Both Aristocrat (visit booth 1141) and IGT are also unveiling their new slot machines. Aristocrat’s new Sharkanado slot machine which was premiered in Las Vegas recently, is on display in Aristocrat’s booth at Global Gaming Expo. IGT new titles for the Crystal Dual cabinet that reflect the Company’s commitment to bringing only the best Core titles forward to players include Valley of Gold featuring a “must-hit by” mystery progressive, the Ocean Magic game that features a “Bubble Boost”, which is activated with an ante wager, and the light-hearted Keystone Kops games Pie Patrol, Pilfering Pooch and Shuffle Scuffle are on the show.

5. The Future of Gaming- eSports, iGaming and Table Games

‘
Among the other high-profile seminar topics at G2E this year are casinos’ investment in eSports, the effect of November elections on gaming, and innovations in iGaming, table games and slots. With a large revenue streams and new customers, eSports and video game competitions are quickly becoming the next big business opportunity for casinos. Casino industry professionals will gain an understanding of the structure of eSports professional leagues, key demographics and the challenges involved with compliance and responsible gaming.

As for gaming evolution in Table Games Technology provides insight into product technology advancements as well as geographic and psychographic differences in player preferences. Industry professionals will discover how implementing new technology impacts a casino’s bottom-line and how table games suppliers hold the key to evolving products. Future of iGaming in the U.S will focus on the position of iGaming across different states in the nation as well as what the future may hold for this growing segment of the gaming industry.

G2E is the focal point of gaming professionals looking to get and stay ahead of the curve in a rapidly evolving industry with gross revenues exceeding $450 billion annually, and held in the city that started it all. If you wish to know more as what will be going on till 29th September 2016 you can visit the venue or look at Global Gaming Expo 2016 website.

Feeling excited then go for some online games to enjoy this weekend and grab awesome offers too.