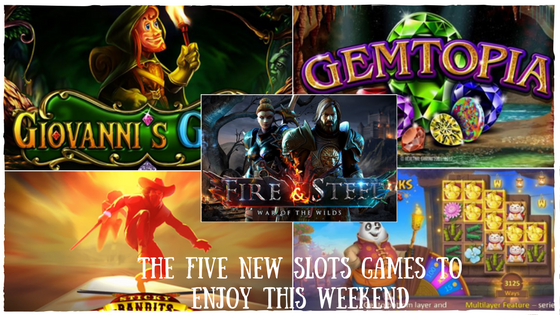 The Five New Slots Games To Enjoy This Weekend

Most of you must be waiting for new slots games to try hands on. Each month there are hundreds of slots that are launched at the casinos by many of the top rated gaming developers. It is but difficult to find all of the new slots at one casino, this is because each casino uses different gaming software. Also there are many online casinos like Rich Casino and Thebes Casino that offer multiple gaming software like Parlay, Rival, Pragmatic Play, Betsoft, and Visionary iGaming, so this gives you a variety in slots games to choose from. Whilst online casinos like Slots of Vegas and other casinos only offer games powered by Real Time Gaming software.
So it is always advised to read the casino reviews here and know what type of casino it is and which gaming software it offers. If you wish variety and different themed slots machines to play then choose the online casino that offers games from many of the gaming companies but if you wish to be terse on a particular type of games then choose the online casino which has games from only one gaming software company. 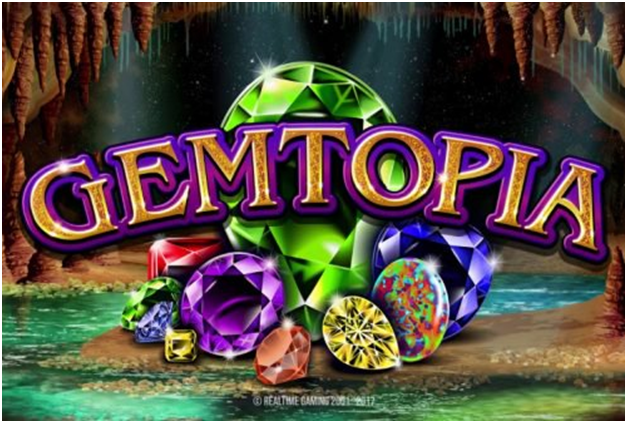 The game has a soothing audio and very crisp color and graphics. Gemtopia Slots allows up to five coins per reels with a coin size of $0.10 and two random jackpots to win.

Gemtopia slots is new slot game brought to you by Real Time Gaming and as the name suggest is beautifully adorned with gems and jewels on the reels. The symbols of the game are thus diamonds, sapphires, garnets, rubies, and amethysts. In the background is a beautiful cave with a crystal lake at the bottom of the reels in this 5 reels and 20 paylines slot machine. There are wild diamonds and scatters and the wilds will have the function to replace other symbols on the reels to increase winnings. There are two random jackpots: a Major and a Minor with the Major reset at $1000, and the Minor reset at $250. These jackpots can be won at the end of any spin. There are also two special features. The first is the re-spin, and the second is the free spins round where the payout can be enormous. Another cool feature is that the symbols pay left to right and right to left. The top payout is $50,000.

The re-spin feature will be activated anytime you get the Wild symbol. An instant re-spin will be awarded and the Wild will expand and help in place. Any wild symbols that appear after the re-spin will start the process over again. The wild is the substitute symbol and will appear on reels 2, 3, and 4. It does not substitute for the Free Games and Bonus symbols.
When you get three or more of the Free Games symbol, you will be awarded 15 free spins. The free games symbol will appear on reels 2, 3, and 4. If three bonus gems appear during this round, three more free spins will be added. When the bonus symbol appears, you will be asked to click on one of them to reveal a prize up to 1000xs your bet. You can play Gemtopia at Silver Oak Casino, Slots of Vegas, Planet 7 and many other online casinos. 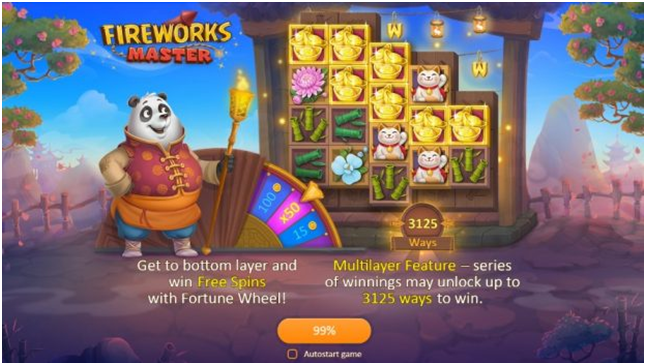 Winning combinations are created by matching the same symbol on adjacent reels and the successful symbols are removed and new ones drop in place in the Multilayer feature with successive wins that open up new game levels in this slot.

Launched by Playson this Chinese themed game is 5 reels and 243 ways to win slots machine. Get on a winning run and the multi layers with expanded reels come into play. Also on offer are free spins on a 3,125 ways to win machine plus a Fortune Wheel that offers cash and multiplier prizes. Play from 50c to $150 per spin on all devices.
The symbols appear on Mahjong tile style reels. You’ll see single, double and treble bamboo shoots as well as flowers, fish, a grinning white cat and gold dishes. There’s also a wild and scatter. A sleepy panda, aka the Fireworks Master watches over the action in the base game.
Fireworks Master also comes with a Free Spins feature to trigger it, you’ll need to land at least 7 of the bonus lantern. You’ll then receive at least 7 free spins. Each bonus that lands during the feature will add another free spin to your total with up to 50 to be won. All spins during the free spins feature are played on a 3,125 ways to win machine.
The multi layers are in play during the free spins too, make it to the bonus layer and the Fireworks Master will light the Fortune Wheel. On offer here are instant cash awards worth up to 100 times your total stake as well as multipliers which can boost payouts by 2x, 3x, 5x, 10x or even 50x. This slots is soon coming at online casinos to play this month. 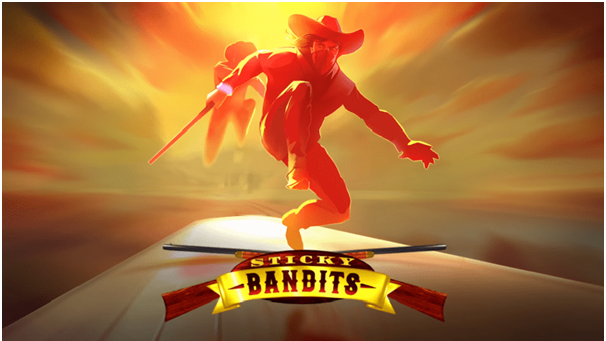 The Free Spins Bonus feature is where the big wins will come from due to the sticky wilds in this slot game.

Sticky bandits is another new slot game developed by Quick Spin and is a 5 reel, 5 row, 30 payline slot. Playable on all devices from as little as 15 cents to as much as $90 per spin, you are plunged into the cacti-strewn canyons of the Wild West as the Sticky Bandits try to loot the runaway train in order to give you the riches.

You will see 2 guns above the reels which looks rather cool. The symbols include Western style playing cards A, K, Q and J as well as sackfuls of gold coins, dynamite sticks and the dodgy desperadoes which are 3 of them. The female bandit is the most lucrative giving you 200 coins for 5 across a payline. The spaghetti western soundtrack is also very good.

Sticky Bandits benefits from massive wild symbols two of them which are train heist villains acts as a wild and bonus symbol and therefore substitute for all symbols. The massive wild symbols are two reels wide and can take over two whole reels. The train is the bonus symbol which appears only on reel one, both wild and bonus symbols award no specific payouts.
Free Spins Bonus feature is played when a Bonus symbol appears anywhere on the 1st reel and a wild appears on reels 2 or 4 and you will be rewarded with 7 free spins. The positions containing the wilds when you triggered the feature will remain in place for the duration of the feature.
The Free Spins Bonus feature is where the big wins will come from due to the sticky wilds. It’s a medium to high offering which maximum wins of up to 739 times your total stake on each free spin. You can play this slot at all US friendly online casinos. 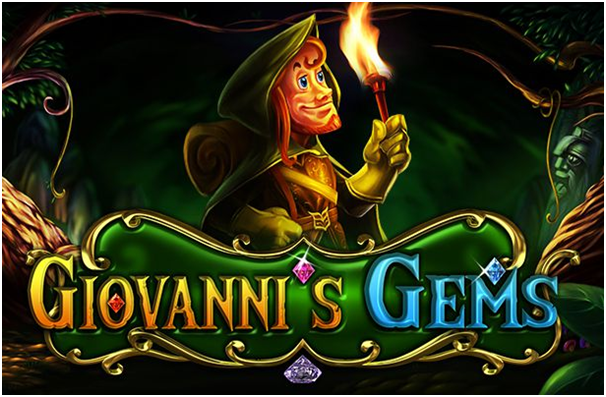 There are few special features in this game, where when winning groups touch one or more pieces of coal are turned into diamonds paying prizes and wins. />

Giovanni’s Gems by Betsoft is a new slot game with high-end graphics and 3D animations with no paylines or reels setting this apart from most traditional casino slot machines. Instead, you’ll be playing on a 7×7 grid of symbols, with the goal on each spin to bunch together identical icons to win prizes. If a cluster of at least 5 of the same symbol appear anywhere on screen, meaning that each one touches another either horizontally or vertically then you’ll win prizes. The larger these groups become, the more you stand to win, and it is possible for multiple winning groups to appear on the screen at once.

The smallest wins belong to lowly coal and is a very important symbol to pay attention to. Other precious gems like citrine, amethysts, sapphires, rubies, and emeralds can earn you larger payouts. The high-paying symbols include pickaxes, torches, and sacks of gems. Hit 25 or more of these sacks in a single cluster, and you’ll win 1,500 coins instantly.
Each time you make a winning combination symbols will leave the screen. This allows new icons to fall into place from above. If these create new winning groups, you’ll be paid again. This process continues until you finish this process with no payouts available, at which point your spin is over.

Look out for Giovanni himself, as the main character acts as a scatter symbol, paying prizes if three or more of him appear anywhere on the screen at once. Find five of these icons during play, and you’ll trigger a free spins game that provides anywhere from seven to 50 free plays, depending on how many scatters you find. During this bonus round, diamonds can be found at all times, not just when they are created by coal. Also there is a gamble feature that allows you to make an optional wager at the end of any winning spin.
Giovanni’s Gems slot is available to play at almost all of the Betsoft powered casino like Rich casino and others. 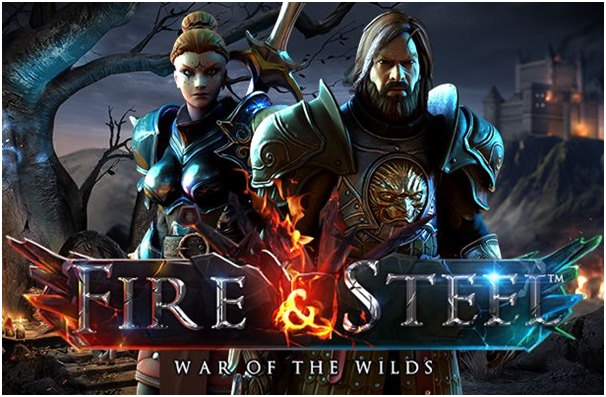 Gameplay takes place over five reels with a unique, non-standard pyramid-style layout in this slot

Fire and Steel slot is new slot machine from Betsoft. It is a fantasy themed slot machine with excellent 3D graphics that include two animated characters that flank either side of the reels. A haunting, epic musical score adds plenty of atmosphere to the machine, with the dark backdrop offering up a bit of the grittier look with the two dragons at the top of the screen offer some of the mystical elements players will expect.

There are 20 paylines in play, and you are able to win either from left-to-right or right-to-left. There are a variety of symbols that can be matched, starting with a variety of gemstones that offer small rewards. Larger payouts come from symbols like goblets, swords, books, and helmets. High-paying icons include shields and the crown, which offers the biggest rewards. You must play all 20 lines on each spin, you can vary the denomination as well as the number of coins per line with a max bet of $100.

There are wild symbols that can be found on the reels along with a standard wild that can simply substitute for other symbols to make winning paylines and look out for two important characters: the swordsman and the shieldmaiden. The real excitement begins if these two characters both appear at the same time, and manage to intersect their created beams. This triggers the War of the Wilds feature, at which point you earn a total of 10 free spins. The point at which the two beams intersected becomes a sticky wild for the duration of the feature, and the bonus can be re-triggered for an additional 10 spins with another sticky substitute icon. There’s also a gamble feature that you will have the option of playing after any winning spin. This slots game can be played at all of the Betsoft powered online casinos like Planet7 and more.

Note that these slots can be played for free to test before you indulge in real money gambling. Also can be played with your cell phone if you wish to keep things on the move or just enjoy with your PC or Laptop as you wish. Also do not forget to redeem bonuses and coupons that the online casinos offer to you to play these new slots.