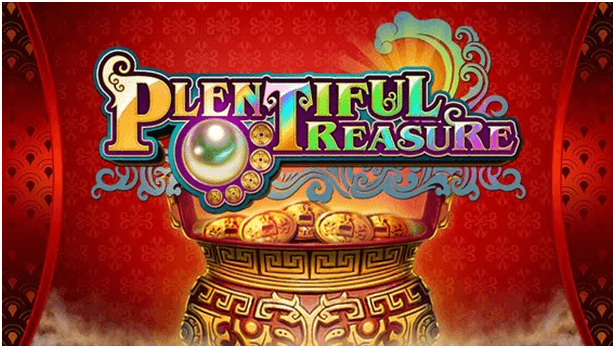 I found treasure recently, you are wondering how? I didn’t go to the treasure island nor climbed the hills or dug wells but I won a handsome jackpot cash prize spinning the reels of the new slot game which was released this month by RTG (real time gaming)as the ancient Chinese Gods were a bit pleased with me.

Yes this new slot game is called Plentiful Treasure and right now all the US friendly online casinos are offering this game with lots of bonuses and offers. RTG launched this game recently on 7th November 2018 which is themed after ancient China and packed with exciting features and jackpots. 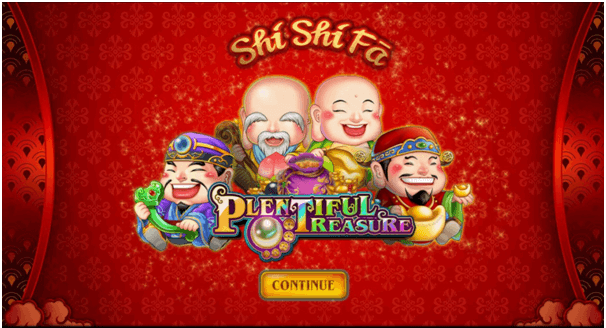 Is treasure for the brave, I don’t think so. It’s for the lucky guy or gal in this mythical realm of lucky symbols that shower golden coins who seek it. Here in this new slot the treasure is called Bao in Chinese. Its appearance entitles the player to select from golden coins for a chance to shower in huge rewards. The game bears all the hallmarks of a Real Time Gaming classic with great graphics, exciting animations and some cool features plus four jackpots; you get a chance to win one of them.

The game looks fantastic and reflects the Asian and Chinese culture to the full. The other name that the game goes by is Shi Shi Fa. This game has been one of the hot favorites at land-based casinos in Macau for quite a while now. RTG has taken the initiative to bring it to the screens of online casino fans across the world. The soundtrack is a perfect match to the graphics and overall ambience that you get at Plentiful Treasure. Game play is simple and there are different features, including a free spins bonus game, to help you score wins. This game has 5 reels and gives you 243 different ways to win, and wins are possible both ways.

What are the Game Symbols? 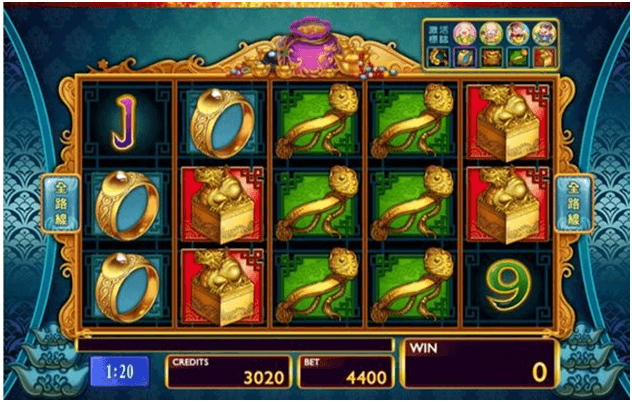 Obviously the Bao, which means treasure, is one of the most important symbols, since it acts as a Wild that appears on reels 2, 3 and 4 and substitutes for all regular symbols. There are loads of Chinese treasure items in the form of symbols on the reels that can give you some great wins when they land in the right combination across the reels. The Pearl is also a Wild and comes with a 5x multiplier, but it only appears on reel 3 and cannot substitute for Bao and Tripod, which is the Scatter that triggers freebies. Apart from 9-A playing cards and four God symbols important for the Gold Coin feature, expect to see Bowls, Caskets, Rings, Necklaces, Teapots and similar symbols from Chinese folklore. 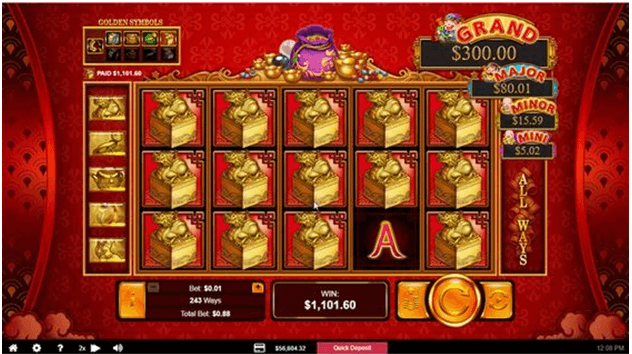 The high-value symbols are painted in gold and low-value wins delivered by the familiar playing card icons. There’s not one but two substitute symbols to help you form winning combinations which are Bao and Pearl. Landing 3 or more Tripod Scatters launches free games bonus and awards 8 rounds on the house, though one can win additional ones by re-triggering the feature in the same manner. What’s more, those pesky low-paying A, K, Q, J, 10 and 9 symbols will not appear for as long as you’re spinning for free, which obviously massively increases win potential of the bonus round. 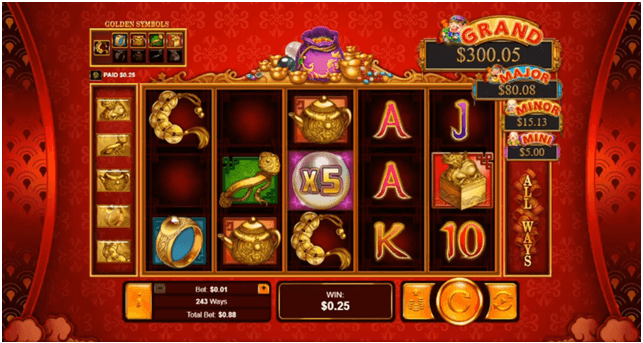 As said above Plentiful Treasure is a 5-reel, 243 All Way Pays, online new slot game giving you more than plenty of opportunity to win big prizes with each spin. You can customize the bet option to suit your bankroll via the chip icon, and click the Spin icon to play. You can also activate the Autoplay feature in Settings, so you don’t have to click manually. This feature can be turned off during gameplay. The coin size is also adjustable, allowing you to customize the bet size to suit your bankroll. The minimum coin size is 0.01 and the maximum is 0.10, which gives you a bet range of 0.88 to 8.80. You can decrease or increase the coin size by clicking the ‘-‘ or ‘+’ button on either side of the coin value field. 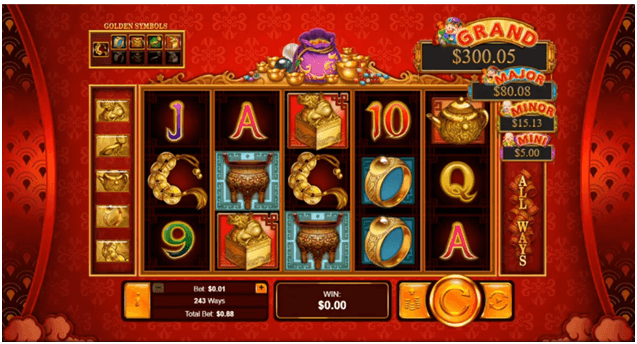 Plentiful Treasure is designed to accommodate both penny slot enthusiasts and those who like to spend a little bit more on each spin of the reels. Select your bet, and start spinning to watch lucky Bǎo and Pearls appear along with Tripod scatters. Earn free games, whopping winning combos and jackpots.

What are the four Jackpots that you can win? 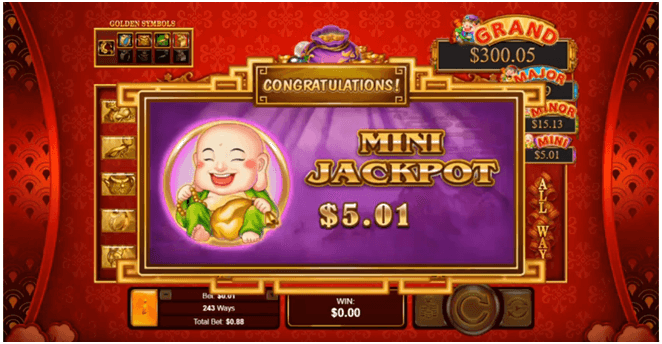 The game is full of treasure with the awesome four jackpots in the game that you need to win to get the treasure. As said above there are two Wilds, the Pearl, which appears only on reel 3 and applies a 5x multiplier on all wins he is part of, and the Bao symbol, which can also randomly trigger the Gold Coin feature and get you one of four Jackpots on the offer. 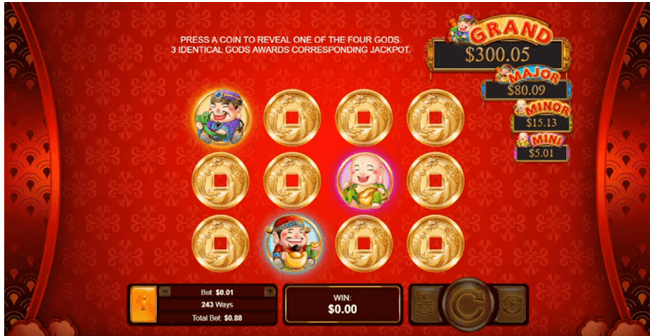 The four jackpots are the MINI, MINOR, MAYOR and a GRAND jackpot. Once the feature is triggered, you get to pick from 12 Gold Coins. Reveal three matching deities and you will walk away with one of the jackpots.

The Free Games feature is triggered when three or more Tripod Scatters appear left to right. Then you will be rewarded with 8 free games during which low-value playing cards will not appear. 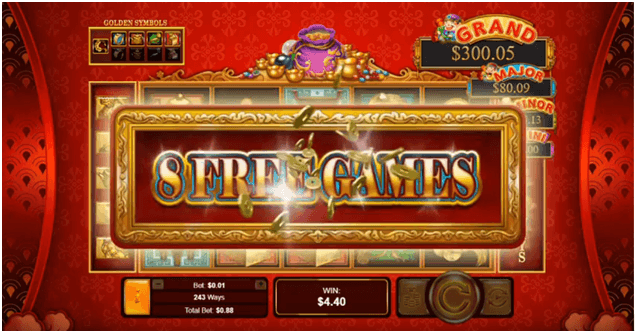 The best part of the story is that the feature can be retriggered, so you may get extra freebies. So to win the four gods that are presented in the game meaning four different jackpots, first of all you have to trigger the Gold Coin feature.

Also, there is the Free Spins feature that only comes with high-paying symbols. Look for the Pearl to boost your wins with a 5x multiplier and take advantage of the 243 All Ways Pays system.

The top reward is 50,000 times the bet per way. Reap the rewards of fortune as you play free games and spins, stunning Pearl multipliers and enchanting golden coins.

Where to play Plentiful Treasure slot?

Almost all the well reputed US friendly online casinos are offering now this new slot game with wonderful bonuses. You can play Plentiful Treasure new slot game instantly even on your cell phone browser with a good WIFI or internet connection. Make a choice to play at the best online casinos like Cool Cat, Slots of Vegas, Planet7, Royal Ace, Club Player and many others. Use Coupon Code TREASURE to grab the lucrative bonus to play this game at almost all the online casinos.

Wanna know more about new games then be tuned here.