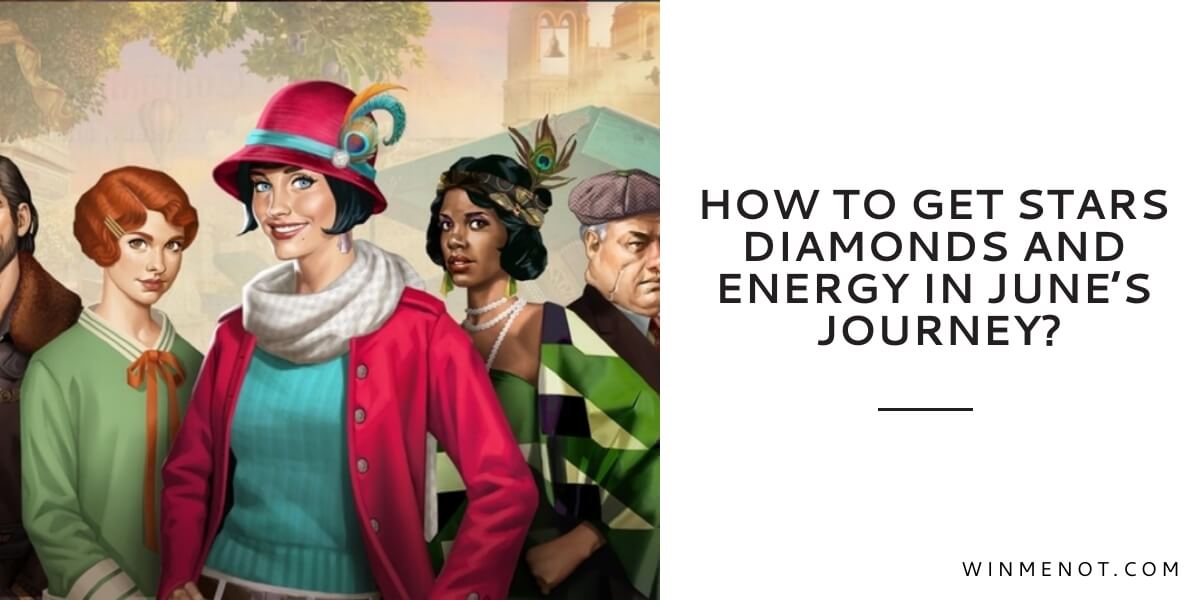 How to get Stars, Diamonds, and Energy in June’s Journey?

For the past many days I have been playing June’s Journey. This game is a bit different from most of the games at app stores. It unfolds an interactive story, a kind of a mystery to solve a murder.  Through June, the beautiful young lady who is the leading character in this game is not a detective but she takes you on her journey to solve the mystery.

June’s Journey is a hidden object game developed by Berlin-based Wooga gaming. It was launched in March 2017 on the Facebook social media platform and on 5 September as an app was launched for smartphones.  June’s Journey is Wooga’s seventh game and was the sequel of Pearl’s Peril but the action is set ten years before. Wooga also released a soundtrack to the game.

You are given a list of items to find within a static scene. Then you receive points for each item found and score multipliers for completing the task quickly. Players can also use a hint feature to highlight items that they find difficult to see. In between many of the levels, puzzle levels require players to find and assemble specific items linked closely to the story.

June’s Journey also has an isometric building metagame, in which players must construct buildings on an island. Some items offer rewards, such as ‘prestige’, which is used to unlock further chapters in the game. You must also expand their island by exploring, which requires three in-game currencies, namely coins, diamonds and compasses.

June’s Journey is set in the late 1920s, and opens with the titular adventurer, June Parker, receiving terrible news from New York: her sister Clare seems to have been murdered by her husband, Harry, who killed himself too. Shocked, she goes back to her childhood home, Orchid Island, to take care of Virginia, her niece and the daughter of Clare and Harry. She is received by Mr. and Mrs. Talbot, the groundskeeper and housekeeper of Orchid Island and its estate.

June, a former nurse in the recently ended First World War, uses her intellect, training, and bravery to investigate crimes.

June discovers that Virginia has stolen a photograph of the crime scene made by the police, and doubts that Harry would ever kill Clare or commit suicide. She decides to investigate and uncover the truth.

How to get started to play June’s Journey?

All you need is to pick your mobile, be it Android or iPhone.

Once downloaded you can at once start to play because June herself comes into scene and takes you to solve the mystery.

In June’s Journey there are two main types of gameplay.

As you play more and more chapters in the game your level is indicated by the number next to June’s picture in the top right corner when viewing your island. You must increase your level to unlock new scenes and chapters.

How to get stars when playing June’s Journey?

While playing June’s Journey I found few hacks as how to get more stars. Why you need stars in the game is because earning Stars allows you to progress in the game, claim extra-special rewards called Star Boxes, and uncover more of the story.

In each scene, you can earn up to five Stars, each one requiring more points to earn than the previous one. Earning Stars allows you to progress in the game and uncover more of the story. You will also find clues in the Hidden Object Scenes. The first time you play a new scene, you will find the first clue. You will uncover the second clue when you play a scene after earning your third Star in that scene. Clues are important to advance in the story, so make sure you find them all.

Note that at the end of each scene, you are awarded some points. Each time you play the scene, those points add up to advance your Mastery Stars, shown at the top of each scene in the Scene Browser. You can earn five Stars in each scene. Each Star is more difficult to earn than the last.

As you earn more Stars, the following things will happen:

Also, when you earn a new Star in a scene, you will be awarded a Star Box containing valuable items. Every fifth Star Box you receive is a special 5-Star Box, but earning those requires some extra effort.

Once you get the desired stars that is 20 stars or so you unlock the new chapter or new scene.

Sometimes a Star can be very close to completion but not quite, and playing the scene just one more time will earn you that Star. Remember, each time you earn a Star you will be awarded a Star Box, and the last Star in each scene will award you a rare 5-Star Box. When all five Stars have been earned, the scene is labeled with a red “Mastery” ribbon.

The number of Stars you have earned in each scene can be viewed in the Scene Browser. The total Stars you’ve earned in the game so far can be seen in the top part of your screen when viewing Orchid Island.

Star Boosters grant you 30 minutes of accelerated Game Play in order to help speed along your progress. Once you activate your Star Booster, you are provided with special rewards that are available for a limited time. These rewards include:

For 30 minutes your star percentage increases, meaning your scene stars fill up twice as fast. Note that this does not mean that you earn more stars, simply that you can earn them faster! During those 30 minutes, your energy is automatically discounted. This means you only need to use 10 energy per scene instead of 15 without watching an ad!

You can find Star Boosters in 5★-Boxes.

Once you have acquired a Star Booster, you can activate them from within the Scene browser.

In the lower left corner, you will see a Star Booster icon (grayed out when you have no Star Boosters in your inventory).

If you have more than one Star Booster in your inventory, the amount will be displayed on top of that icon. Once you tap on the icon, a dialogue will appear, highlighting what you get from activating the Star Booster. You can then choose to activate it or to keep it for later. Star Boosters can be stored if you click the X in the pop-up window instead of ‘Activate’, your Star Booster will not be lost.

Remember once you activate your Star Booster it cannot be paused or canceled. The time must be used all in one sitting. Any unused time is forfeited. If you close the game or lose connection, the timer will continue. You can resume your time if you reconnect to the game before your time runs out.

How you get more free flowers?

The amount of Flowers required to reach the next level is indicated by the number next to the Flower progress bar, in the top right corner when viewing your island.

Earn Flowers by placing decorations on Orchid Island, by placing and upgrading buildings, and by restoring landmarks. The amount of Flowers a decoration or building awards is displayed with the item in the shop, next to the Flower symbol.

So you spend coins that you have earned while playing the game and spend those coins on buying decoration or building. This gets you get more flowers. But remember there is a time for it. As the time to build takes about 9 hours or so to get you flowers.

Buildings and landmarks require you to upgrade them in order to receive the maximum Flower value.

How to get more free coins?

The game offers you free coins to play. Coins are used to buy decorations and buildings in the Shop and to remove obstacles from Orchid Island. There are several ways to get them:

How to get free diamonds?

Diamonds are earned in small amounts during the game play. You can use them to speed up timers, buy missing materials, and Energy refills too.

Diamonds are super valuable. There are several ways to get them:

How to get more energy?

Also there is extended Energy Bar which is a unique offer in the Energy Shop. It permanently extends your Energy Bar to hold 150 Energy, instead of 110. Your bar will still refill at the same RATE, but the bar now holds more. When you buy the extended bar, you also receive a 3x refill (450 Energy in total) as a one-time bonus. A serious Energy package for a serious June’s Journey-er.

The extended Energy Bar is a one-time offer. If you have already purchased it, you will see the 3x energy refill in the Shop instead.

If you join the June’s Journey Facebook page you are offered free coins and free diamonds.

Finally the game app offers in app purchases to buy more coins, diamonds and energy to play the game. It also offers bonus coupons to redeem such purchase. But that’s your choice. It also allows you to purchase virtual items with real money inside the game. You can disable in-app purchases in your device’s settings. A case of coins may cost you from $9.99 or more. Similarly chest of diamonds can cost you $49.99.