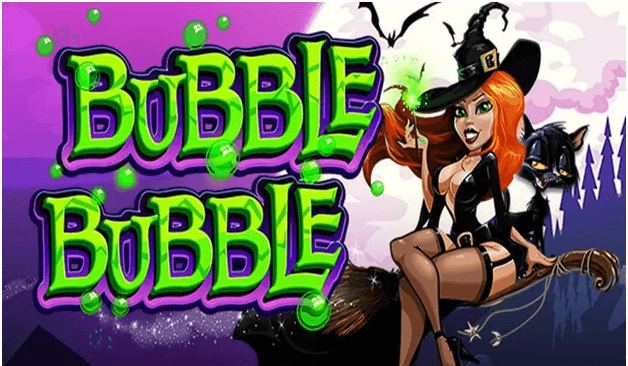 Bubble Bubble 3 new slot has arrived at online casinos to celebrate Halloween. Bubble Bubble slots are a series of slots by Real Time Gaming. This slot is bubbly with sexy witches wearing high heels and stockings. After the success of Bubble Bubble slot came the second version of it and now the third version has been launched recently. With lots of prizes and bonus rewards you will find all kinds of spooky things such as skulls and spiders, spellbooks and Jack O’Lanterns, frogs, ravens, black cats and lots of horrible ingredients to go in sexy witch’s cauldron. There are also lots of great bonus games to play including Wild Witch, Scattered Cauldrons, A Great Ghost Feature, and a bewitched feature.

In this sequel Bubble Bubble 3 new slot game a new sister to the earlier witches has been added.  The witches will mount their magic broom and visit you so be ready to welcome  Winni, Willow and Wanda

The sexy trio has been working their magic to bring even more treats, tricks, and excitement this Halloween, complete with three times as many Jackpots and prize-winning opportunities.

Bubble Bubble 3 runs on 5 reels and 50 fixed paylines complete with goodies to lure you. The top reward in this spooky new slot is 4,000 times the bet per line.

The game symbols are of course the spooky things. Besides the three witches there is a scary castle wall The pay table features Caldron, Grimoire, Elixir, Witch’s Hat, Mushroom and low valued royals carved into pumpkins A, K, Q, J, 10 and 9. Witness the ladies use their dark powers to turn letters, numbers, amulets, hats, pumpkins, and other low-paying symbols into magical combinations that trigger a huge bag of prizes!

All three of the Witches are Wild Symbols, although some of them appear only under certain circumstances. The Scatter icon takes on the shape of a Crystal Ball. Willow and Wanda appear on reels 1 and 5 respectively and also expand to cover the entire reel, doubling the win or awarding an x4 multiplier if both Wilds partake in a win. The best part is that they replace all of the other icons, including Scatters.

The three main features in Bubble Bubble 3 slot are:

Unlock one of the Mega Magic bonus features to watch your bankroll fill up with Free Games, Re-Spins, and other spell-binding rewards.

When three or more Scatters activate the feature and players get to enjoy one of the following options:

The powerful Crystal Ball acts as the Scatter in this game and when 3 or more appear left to right, all prizes are multiplied and 1 of 3 bonus rounds is activated.

Three  Respins to start with where the triggering Witches remain locked in position. Each new Crystal ball is also held in place for the remainder of the round whilst also resets the respin counter. Filling entire reels in Crystal Balls awards the Grand Jackpot.

Win-Win is active during the Wilder Witches Feature. Any Witches in the trigger combination are changed to Crystal Ball symbols that is 3 per reel before re-spins commence. If a new Crystal Ball appears in a spinning position, it is held for the remainder of the feature, and the number of remaining re-spins resets to 3. At the end of the re-spins, all prize values and/or Jackpots displayed on the Crystal Balls is awarded.

Thus when the Crystal Ball Re-Spins feature is triggered, you’ll win a Grand Jackpot when 15 Crystal Balls fill all 15 positions. During the Wilder Witches Feature, players may trigger the Win-Win feature which also features a Jackpot of a whopping X1000 times the bet!

How to play Bubble Bubble 3 slot?

How you win and what you win?

To win you need to know the rules for Scatter and the Wild symbols.

One of three features is awarded when three or more scatters appear Left to Right.

Touch a triggering Crystal Ball to reveal the feature. In Winni’s Magic, Winni the Witch has been cast off the reels, but she’s still trying to help! The Winni’s Magic Scatter and/or Winni’s Hextastic Symbols feature may trigger after a normal spin.

Winni’s Magic Scatter appears when Winni may zap a symbol on reel 3 when 2 scatters occur Left to Right, after paying the initial scatter and line prizes. The zapped symbol transforms to a scatter, awarding an extra win and triggering a Mega Magic Feature!

The Mega Magic Feature happens when Winni Returns. The Winni Returns feature awards 20 free games. Up to 9 Wild Winni are zapped onto the reels after any scatter win is paid. The feature can be retriggered, with retriggering scatters counted before Wild Winni appear on the reels.

Mega Magic Feature Wilder Witches happen and 9 free games are awarded, and any Witch appearing will cast a spell. Reels struck by the spell are turned into the same Witch that cast the spell, before pays are awarded. If both Witches appear, they will either cast a spell onto the middle reel to turn it Wild, or add 33 extra free games, or do both! The feature can be retriggered, with retriggering scatters counted before any spells are cast.

Any Witches in the trigger combination are changed to Crystal Ball symbols (3 per reel) before re-spins commence. If a new Crystal Ball appears in a spinning position, it is held for the remainder of the feature and the number of remaining re-spins resets to three.

Note that Winni, Wanda, and Willow are only here to help you reach the maximum exposure of 50,000x the bet per line.