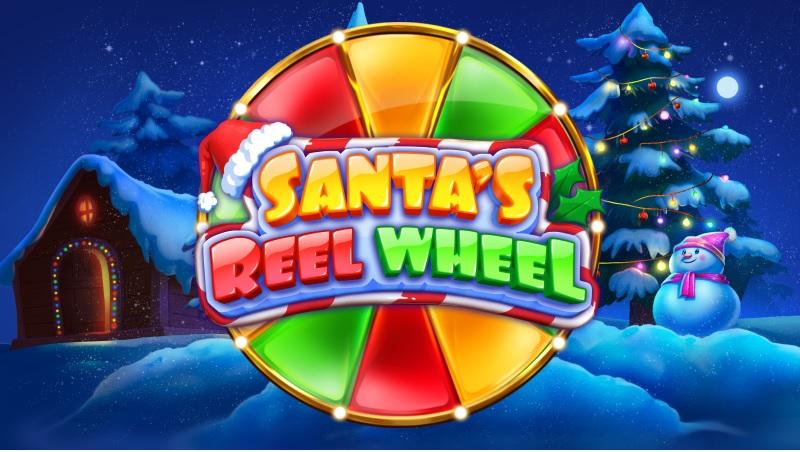 Santa’s Reel Wheel is a fun slot game released by RTG (Real Time Gaming) to celebrate Christmas. As Santa brings good will, cheers and gifts, so in this game you get in the mood of holiday cheer playing Santa’s Reel Wheel slot game where in the Christmas spirit, Mr. Claus and his elf assistants will warm your heart and give you the chance to fill your bankroll with amazing rewards.

The unique thing in this slot game that starts with only 1 reel, then expands its action radius to three of them, thus replicating a progression through levels. The extras all add up until the playing board goes completely bonkers at some point, offering 15 spinning positions.

On the playing board, you have three reels with medium volatility, and there isn’t much going on with the regular symbols, but that’s until you start hitting the right combinations.

This slot has come up with a 3 level progressive gameplay where punters get to achieve all of their long awaited Christmas goals. This includes 4 Jackpot Prizes and wins of up to 5,000x the stake.

As said above Santa’s Reel Wheel is played on a 3×3 layout, and requires you to line up magical symbols to reveal winning combos. There is a special Blue Diamond Wild symbol that substitutes all low-paying symbols in the game apart from the Scatter, which is the Firework. So in this game the symbols are all Xmas themed, starting with the Diamond Wilds and Firework Scatters all the way to the Presents, Christmas Holly, Bells, Candy Canes and Hearts, Spades, Clubs and Diamonds Cookies. Five thrilling extra elements are also found in this innovative new game, which can make it snow bonus jackpots and huge cash rewards.

Level Up, Santa’s Bonus Wheel, Santa’s Mega Bonus Wheel, the Free Games feature, and the Fireworks feature are a few of the bonus rounds available. Each one offers the possibility for players to acquire additional in-game benefits and prizes, such as Free Spins, immediate entry to one of the other bonus rounds, or one of the game’s numerous jackpots.

Level Up feature is triggered when the game starts Santa’s Reel Wheel game has 3 single-line games, arranged in Levels. The primary game is the bottom 3-reel game, with the Level 2 and 3 games arranged above it. When the game starts Levels 2 and 3 will be locked but they would be unlocked according to the following rules:

Santa’s Bonus Reel is a feature that allows the player to win:

In the Fireworks Feature santa’s Mega Bonus Wheel is triggered when advanced prize is awarded in Santa’s Bonus Wheel.

Santa’s Mega Bonus Wheel is a feature that allows the player to win free games.

Free Games play commences in Level 2 in each free game.

If Santa’s Bonus Wheel is activated in free games, it will either award extra free games or the Fireworks Bonus.  Free games are played at the Bet of the triggering game.

Santa’s Reel Wheel’s highest prize is an enormous 50,000 times the bet per line!

The Grand Bonus of 1,000 times Bet is awarded if all 15 positions have been filled by Fireworks during re-spins.

Only Fireworks symbols are active during the Fireworks Extreme Feature.

How to play Santa’s Reel Wheel?

How to win the game?

Note that Santa’s Bonus Wheel is your main source of extra wins in the game. It’s triggered by Fireworks and has six wedges, each representing a reward of various sizes, from a Mini Bonus to a Grand one. You can also activate the Mega Bonus Wheel by hitting the Advance wedge – it only consists of two halves that grant you Free Games and Fireworks, respectively.

The Fireworks feature deserves special mention, as it transforms the gameplay significantly. With the 15 spinning positions we mentioned at the beginning, you aim to fill the whole board with Fireworks to get the Grand Bonus that amounts to your bet multiplied by a thousand. Of course, you have three spins to do that, but the feature can be retriggered.

If you manage to fill the entire reel setup with Fireworks, then the Grand Jackpot worth 1,000x the stake is awarded.

Q1. What is Santa’s Reel Wheel?

The top prize is 50,000 times the bet, and the game includes several bonus rounds where players can earn Free Games, Bonus Jackpots, and the chance to hit a massive top prize.

Q3. How can I trigger the jackpot?

The slot game has 3 single-line games arranged in 3 levels Whenever there’s a win or a Firework Symbol on level 1, players unlock level 2.

By repeating the same process you unlock the 3rd level where, once again, in the same manner, players trigger the Santa’s Bonus Wheel. Here, it is possible to win Mini, Minor, Major or Grand Jackpot as well as “Advance” or Fireworks Feature.

Each Free Spin starts at level 2 and if it happens that you manage to trigger the Santa’s Bonus Wheel during the round, either Fireworks or Extra Free Spins can be won.

Q5. What is fireworks feature?

The fireworks feature is one that contains 15 reel positions, including levels 1, 2 and 3. Only Fireworks can appear and remain sticky on the reels as well as refresh the duration of 3 Re-spins. Somewhat a traditional Hold & Win experience.

Q6. What is the best online casino to play this slot game?

The legit RTG powered online casinos like Slots of Vegas, Cool Cat, Slotocash, Win A Day, Rich Casino, Play Croco and others are best to play this slot game.

Q7. What is the Wild Symbol in this game?

Q8. How much it costs to play Santa’s Reel Wheel?

Santa’s Reel Wheel can be played for free without any cost. But if you like to win some real cash, then you have to play with real money. The betting range in this online edition goes from 0,10 – 10,00 credits, it is a medium volatile game with a maximum exposure of 5,000x the bet per line.