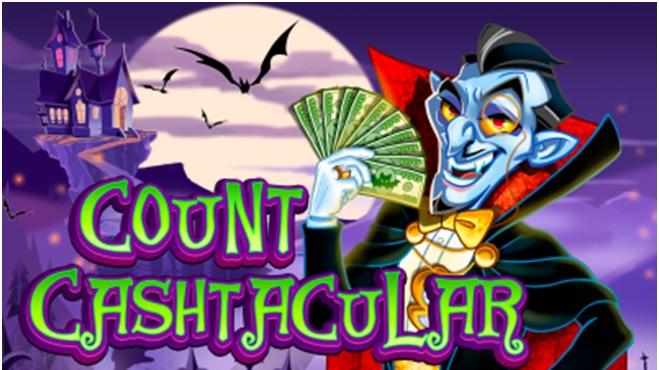 Count Cashtacular is the new slot game from Real Time Gaming. The theme of this slot game is based on Halloween adventure where you find a haunted house and the blood thirsty count awaits to be spinned on the slot reels. All the symbols, as well as backgrounds, seem to have been drawn from scratch. The vampire master and his entourage remind them of Nickelodeon cartoons and create an atmosphere fitting for All Saints’ Eve. There’s a fair amount of humorous bits hidden in many parts of the game play.

Be ready to venture in the Count’s spooky abode and get ready to bleed the reels dry of Free Games, Re-Spins and cash in the new Count Cashtacular slot game.

The game is 5 reel 25 payline horror lot game where you meet some of the spooky characters.

You have a goofy count and a jolly bunch of supporting game symbols, all typical for the occasion – spiders, zombies, witches, diamond-fang dentures and a spooky-scary loop sets the mood right and doesn’t grate on the player’s nerves after a while.

You’ll also encounter gruesome symbols like teeth, spiders, tombstones, blood-filled goblets, sexy she vamps, and a monster butler that pay out some handsome wins when 3 or more appear anywhere on the game’s 5 reels.

The goal is to hit as many Coats of Arms and Counts on the reels since they represent the Scatter and Substitute symbols. The latter, however, acts in a moderately unorthodox way, since it replaces any concurring Scatters as well, often rendering them powerless. It is balanced with the Pick Bonus feature. The Count himself plays the role of wild in the game, where the wilds can substitute scatters in addition to all the other symbols. Scatters change the win direction by symbols – from left to right to anywhere the winning combination is going.

As the Coat of Arms is the Scatter and the great Count himself acts as the Wild, not only does he replace all symbols in the game as well as the Scatter, but when he appears on reels 1 and 5, a special Pick Bonus Feature is triggered. Here, players are given the choice between one of two prizes:

5 Re-Spins or 12 Free Games with Triple Prizes. While you cannot retrigger the Re-Spins feature, if Count Cashtacular shows himself again on reels 1 and 5 during Free Games, you’ll receive an additional 12 Free Games to ramp up your chances of hitting the jackpot!

During Free Games, if a Count Cashtacular symbol appears simultaneously on reels 1 and reel 5, 12 additional Free Games are retriggered

During Re-spins Count Cashtacular are held in place on reels 1 and 5. Re-spins are played at the lines and bet of the triggering game. The Pick Bonus feature cannot be retriggered during Re-spins.

Jackpot In The Game

There is no Jackpot to win in the game but instead, you get a hulking max payout that multiplies your bet by fifty thousand times per line – and there’s actually a fair chance of striking such figures since the slot machine has 25 fixed paylines and medium volatility.

Thus  the top award up for grabs in Count Cashtacular is a whopping 50,000 times the bet per line. If you want to maximize your winning potential you are advised betting the maximum number of coins.

How to Play Count Cashtacular Slot At Online Casinos?

A redhead bride of the count is the best-paying normal symbol. She brings you wins of 1,000x for five of her on a payline. Next up is his helper, and that helper brings you 750x payouts when five line up. Note that like the wild, both of these characters offer up wins for two of a kind or more. However, the following symbols all need a minimum of three on a payline for a prize.

To win you need to explore the slots game features. You must approach the Pick Bonus feature strategically. It allows you to choose between Free Games and Re-Spins, which can be used to farm even more Free Games or target the three middle reels that remain active during the Re-Spins. Therefore depending on how the game behaves in this particular session, you can thus maximize your yield when playing Count Cashtacular for real money.

Q2. What is top prize to win in this slot?

The top prize to win in this slot game is 50000 times the bet per line.

Q3. What is pick bonus feature?

A Pick Bonus Feature is where players can choose from one of two bonus prizes: 5 Re-Spins or 12 Free Games with Triple Prizes.

The only way to activate the Pick Bonus Feature is by landing a Wild on reels 1 and 5 at the same time during the base game.

Q5. Are there any bonus codes to play this game?

Yes there are bonus codes to redeem when you play this game with real money. Check out the latest bonus codes here.

Q6. Can I play this slot for free?

Yes you can play for free. Also known as demo or practice mode you can play to your heart’s content this game all free without spending a cent or a dollar.