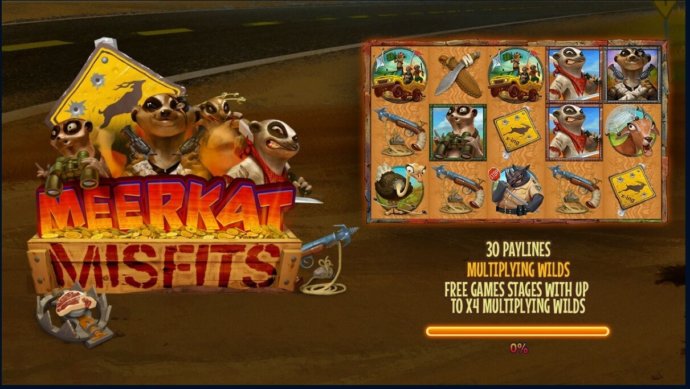 Meerkat Misfits is the new slot game from Real Time Gaming. This slot game will take you to experience the cute Misfits which will join you and their commander Meerkat to have the bounty of precious treasures.

Misfits are found in green bushes and forest grasslands. Actually they are mongoose that live in forests of South Africa. They have large eyes, pointed nose, long legs and a thin tapering tail. These squirrel-size members of the mongoose family live in groups as large as 40, and everyone in the mob participates in gathering food, keeping a look out for predators, and taking care of the babies. There are few animals on Earth who work as well together as meerkats.

The slot game is based on Meerkat Misfits that are the main characters of the reels.

Meerkat Misfits – About the Game

Meerkat Misfits is 5 reel 30 fixed payline slot game where it offers high volatility play with an approximate return to player percentage of 97.3%. The Meerkat Misfit slot has a maximum payout of 2,000x the bet per line to bring even more buzz. The four meerkats here are on a mission and that is to protect the animals of the African savannah from poachers.

The symbols revolve around the Misfits like Muscle, Scout, Hunter, and Commander Meerkat in an effort to rob the reels of precious bounty like Free Spins, Multiplying Wilds, and a mighty top prize

This new slot game will have you lining up lucky symbols to trigger super-fun bonus rounds and the chance to multiply your winnings. The game’s high-paying symbols are the four meerkats, which each act as a Multiplying Wild and can substitute low-paying symbols in the game. Other than the Free Games Scatter, you can expect to see road signs, ostriches, knife sheaths, harpoons, and bear traps make their way onto the reels.

The prize is x2, x3 or x4 when a multiplying Wild appear in a win, respectively.

Only the highest Wild multiplier is used.

The Wilds will only appear on reels 2, 3, 4, or 5, and prizes of up to x5 are awarded, respectively. When 3 or more of the Free Games symbols appear anywhere on the game grid from left to right, the Free Games with Stages feature is triggered. During this feature, players will be able to progress through 4 different bonus stages where they can earn Free Games and additional Multipliers. The progression through the different stages is independent of the bet level. Primary game reels are different per stage.

The four stages to progress

The four possible stages are:

As mentioned above progression through Free Games Feature stages is independent per Bet Level.
Primary game reels are different per Stage.

On top of Multiplying Wilds and exciting bonus stages to look forward to, players also have the chance to get their furry paws on a massive 2,000 times the total bet!

How to play Meerkat Misfits?

With a slot like Meerkat Misfits, your best bet is to wager maximum coins. This sets you up for winning and being able to claim the game’s top reward.
If you find yourself getting a bit tired from spinning the reels manually, just hit the Autoplay feature to get the reels spinning automatically. From there, you can simply relax and watch the reels do all the work.

Q1. What is the top prize to win this game?

The top prize is 2,000 times the bet and the game includes Multiplying Wilds that multiply your prizes by x2, x3, x4, or x5, respectively.

Q2. When are free games triggered?

When you line up 3 or more free games symbols you trigger the free games with Stages feature allowing you to earn extra free games and multipliers.

Yes its your choice. You can play for free if you want. Later on even you can switch to real money play hoping to make some real cash.

Q4. How much is the minimum bet in this slot game?

Q5. How much is the maximum bet in this slot game?

The maximum bet in this slot game is $15.