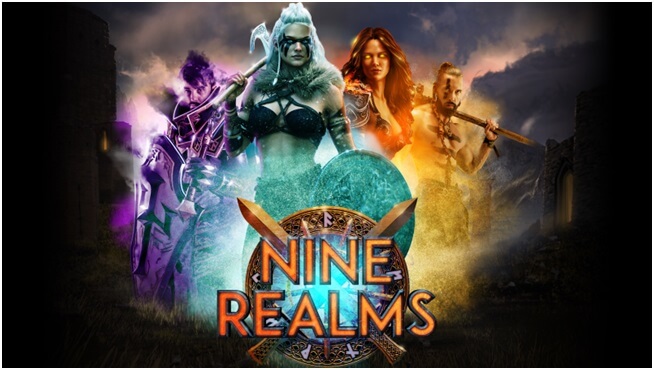 How To Play Nine Realms Slot?

Nine Realms slot is the new slot game based on the mystical world of Norse Mythology.  Powered by RTG this game is now running at online casinos for gamers to play. The Norse World, or  the Nine Realms is the world of the Norse gods and other races that exist along the branches of the World Tree, weaving them together to form the Norse cosmos. It includes the nine realms (Midgard, Alfheim, Asgard, Vanaheim, Niflheim, Muspelheim, Helheim, Svartalfheim, and Jotunheim), and the Realm Between Realms which serves as an “in-between space” between the nine.

As believed the tree itself is said to exist beyond time and space and therefore, has no beginning but at one point there were only two realms in existence, Niflheim and Muspelheim, the lands of fire and ice. When the ice from the north met with the heat from the south, it created water and from this mystic water came the first being in the Norse cosmos to exist: Ymir, the progenitor to all living creatures and the first Frost Giant.

After Odin and his brothers killed Ymir, they fashioned his body to create the realm of Midgard, where humanity would live alongside most animals.

Nine Realms slot by RTG is where you join your fellow warrior comrades on the battlefield, you’ll be opening the great portals and collecting the most amazing prizes along the way, including Free Games, cash, and the chance to win a mighty top reward.

This fascinating new slot machine game, with 5 reels, 243 paylines, and 78,125 options to win in the Free Games, will take you to the magnificent tree. With stunning graphics, enthralling music, and three intriguing extra features with big rewards to be won you will certainly love this slot game.

When you load this game on your gaming screen you will find yourself on the field where an epic battle is going to happen any day now, while the large castle can be seen further back.

Taking a look at the board you get to see a plethora of symbols that fit well with the theme – four different warriors that will fight for their own houses, as well as crossed swords and a shield, all awarding mid to high-end payouts.

While there is no Wild in this game, you can expect to see low-paying symbols of cards valued from 10 to Ace, alongside the Free Games Scatter symbol, the Helmet symbol, and the stacked Warrior icon. If 3 Scatters land on reels 3, 4, and 5, you’ll open up the Free Games Feature where 7 Free Games are instantly awarded. During this feature, the gameboard expands from the standard 3×5 layout to 7×5, which increases the winning opportunities from 243 to a whopping 78,125.

Two other exciting bonus features may also be triggered in this game: the Mystical Zone feature and the Gatekeeper Portal feature.

The Mystical Zone consists of all positions on the third reel during the base game, and all 3 middle positions on reels 3, 4, and 5 during the Free Games feature. The Mystical Zone feature is triggered when a stacking Warrior covers the entire Mystical Zone. Other warriors may appear in this time, awarding an additional payout. This means any other Warrior symbols on the gameboard then morph into the triggering Warrior, and the game pays based on the total number of these symbols on the gameboard.

The Gatekeeper Portal may be activated on any random spin during the base game or the Free Games feature. Once activated, helmets may appear in random locations on the game grid and morph into Warrior symbols to increase your chances of forming a line win. The Gatekeeper Portal Feature can only be triggered on a non-winning spin.

As said above landing 3 or more Scatter Symbols will award you with 7 Free Games, during which the board increases to 7×5 in size, offering a whopping amount of 78,125 winning ways!

Free Games are played at the bet amount of the triggering spin, and the bet cannot be changed. The Free Games Feature ends once there are no more Free Games remaining or when the maximum payout is achieved.

How to play Nine Realms?

Once you’ve set your wager amount, click Spin. With a slot like Nine Realms, your best bet is to wager maximum coins. This sets you up for winning and being able to claim the game’s top reward.

What you win in this slot?

With three exciting bonus features there are great prizes to win. The top award is 2,500 times the base bet, and the game includes a Free Games feature which is triggered when the Scatter appears on reels 3, 4, and 5. There is no Wild symbol in this game, however, the Warrior symbol may appear stacked on the reels and morph the Helmet symbol during the Gatekeeper Portal feature.

Q1. Is this game available for free?

Yes you can play for free without spending any money.

Q2. What is the top reward in this slot to win?

The top award is 2,500 times the base bet in this slot game.

Trigger the mystical zone feature and your payout will be based on the number of warriors on the reels. 3 warriors = x6, and the amount increases for every extra warrior you hit. For example 10 warriors = 640, and 21 or more will get you 50,000.

Q4. Is there any free spins bonus to play this slot game?

Yes most of the online casinos are offering free spins as well as no deposit bonus to play this slot game.