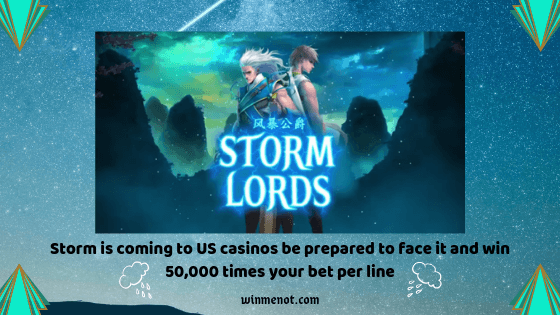 Storm is coming to US casinos- Be prepared to face it and win 50,000 times your bet per line

I don’t like storms, but storms at casino seems quite interesting to me. Storms are followed by rains which is just awesome. At casinos there is a storm coming followed by rain which will make you richer in a day.

If you are comic reader then you must have heard about ‘Storm Lords’, the ancient Chinese warrior story. This comic fiction features two young warriors, Nie Feng representing Wind and Bou Ging-wan representing Cloud. In another comic book from China appeared the Storm Riders, and such storm related stories were adapted into two Hong Kong films and a Taiwanese television series too. Now the same storm has come to life in the form of a new slot game which was released few days ago at US casinos. 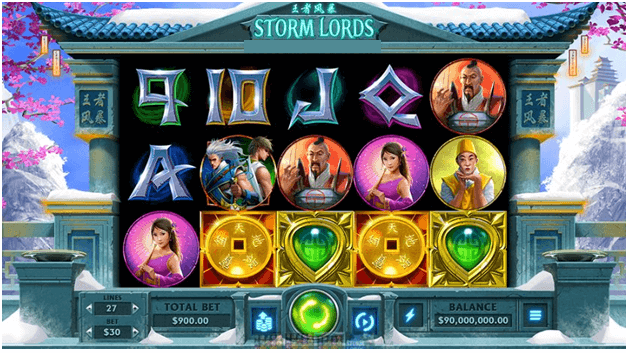 Known as Storm Lords this new slot game has been developed by Real Time Gaming (RTG). Storm Lords is a 5-reel slot with 50 variable paylines and offers lots of free games, re-spins, treasure, coins and a massive top reward! The Wild in this game are the Storm Lords themselves, who act as the substitute for every symbol in the game apart from Scatters. All symbols pay left to right in this game except the Amulet Scatter symbol which pays any. Unlike traditional slot games, Storm Lords is a slot packed full of 3 awesome bonus features which awards even more prizes! 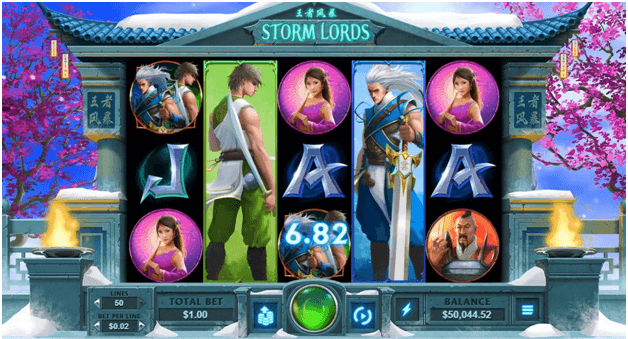 In Storm Lords slot you will come across some of the familiar Japanese and Oriental symbols to keep you engaged and entertained. Some of the symbols to watch out for are the fighting duo, a pretty lady with an umbrella, and the familiar suits of cards with an Oriental design. The highest-paying symbol is the image of the two fighters which offer up to 800 credits when 5 identical symbols land on the reels. 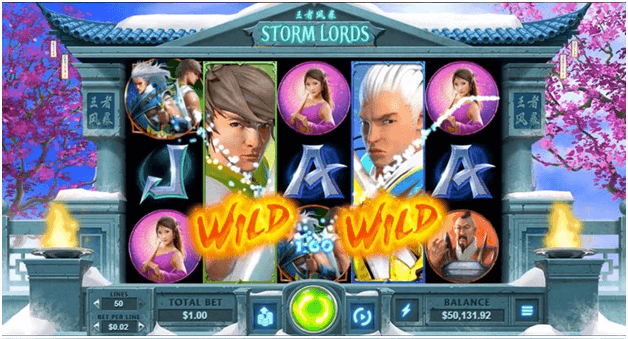 More than the instant wins, Storm Lords is best known for its bonus features that you can activate using special symbols. The Treasure Coin feature is activated when six or more Treasure Coins appear anywhere on the reels. During this feature, three re-spins are awarded when Treasure Coins are held in position. If a new Treasure Coin appears in a spinning position, it remains there and gives you another three re-spins! At the end of the round, all bonuses and prizes are added on to your winning.

Another incredible feature you can expect to come across in Storm Lords is the Wild Reels feature which gives six free games when Cloud and Wind are held on reels 2 and 4. While the Treasure Spins feature gives another six free games, with the chance of retriggers. 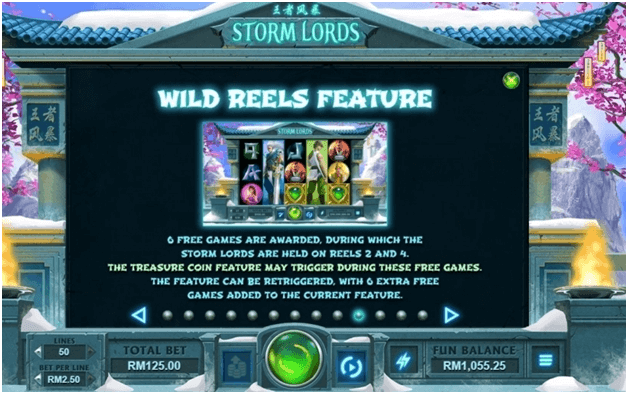 Storm Lords is the game that forecasts a rain of prizes every day, complete with a top reward of 50,000 times the bet per line! Match up winning symbols and get ready for an explosion of free games and re-spins when you trigger one of the exciting and lucrative features this game promises. Warning do not carry your umbrella or try to save yourself from the storm, otherwise you wont get anything.

So the features in the game are:

•Three re-spins awarded, with triggering Treasure Coins held in position
•Three or more scattered Amulets appearing on a normal game triggers 2 x free game choices; Wild Reels or Treasure Spins feature
•Six free games awarded, during which Wind and Cloud are held on reels 2 and 4 in the Wild Reels feature
•Six free games awarded, during which Treasure Coins are held in all positions on reel 5
•All features can be re-triggered, with six extra free games added to current feature
•All symbols pay left to right and the jackpot award is 50,000 x the bet per line

How to play Storm Lords slot at online casino? 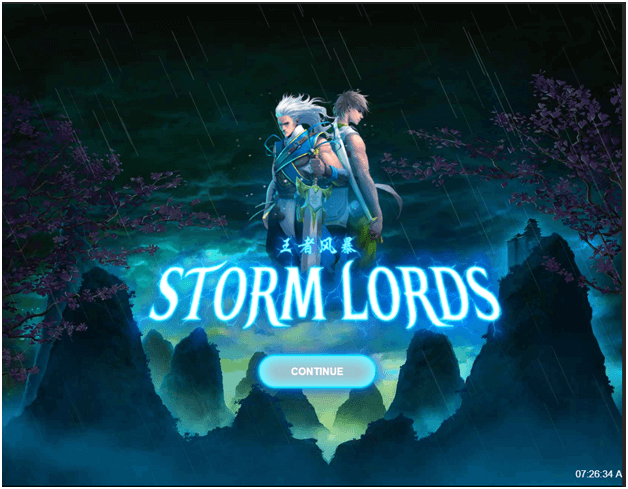 It’s very easy to play to play this new slot game Storm Lords. All you need is to visit the legit online casino of your choice with your cell phone, PC or tablet.

•Click on Sign Up or Join Now if you are a new player at the casino
•Make an initial real money deposit of US$10-$25
•Use the coupon codes to get the bonus of your choice in this new game.
•Visit the games lobby and tap on this new game
•Once you’ve loaded the game, simply pick your bet amount by selecting the + and – symbols at the bottom of the game screen.
•Set your wager amount and click Spin. 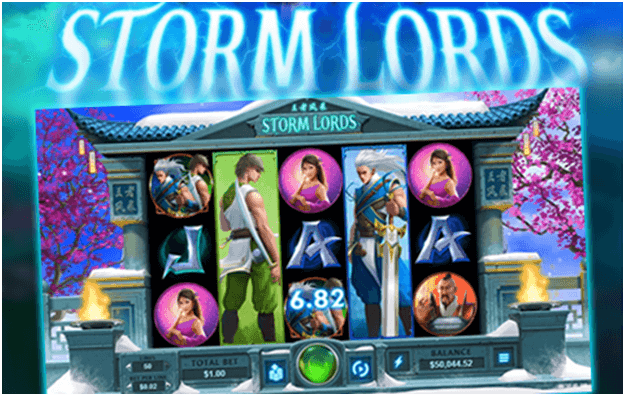 Now advance through the levels and start to gather a snowstorm of free games, re-spins and more! If you find yourself getting exhausted from spinning the reels manually, just click the Autoplay feature to get the reels spinning for you. The reels being part of the front of a temple-like building are populated with metallic-looking Royals and images of elements, warriors, a princess and a priest which you will love to spin.

Various US friendly online casinos are offering bonus coupon codes to play Storm Lords. Here are few of them which you can use while playing at these casinos.

Get 200% no rules sign up bonus plus get 100% match free chip at Palace of Chance casino. Use coupon code: NEVERENDING200 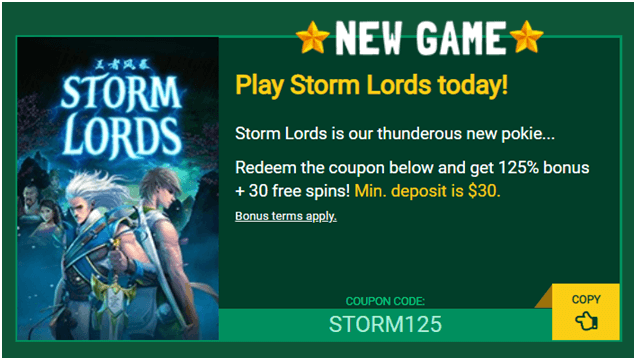 Besides the above coupon codes you can also play Storm Lords for great bonus coupon offers at Slotocash casino, Silveroak casino, Dreams casino, Club player casino and others.

Now taken by the storm at the casinos hope for good luck to win awesome rain showers of money!