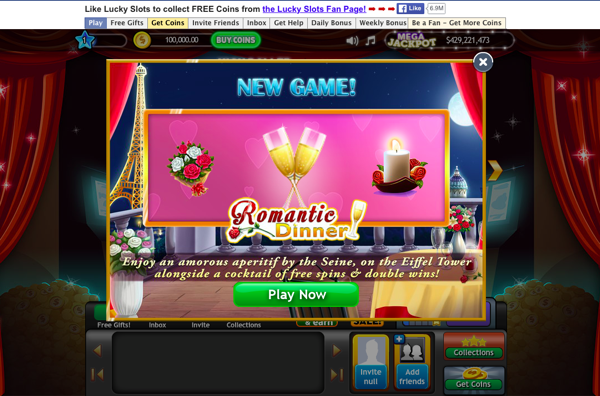 A Shocking Review of Lucky Slots

Lucky Slots has made a name for themselves as on of the best casino games on Facebook. Over the years they have accrued millions of users. Their generosity & steady flow of free chips has left users raving. They have used this wild success to provide players with a continuous wave of new bonus games. Curious to see if this game still lived up to the hype, I decided to dive head first into this notorious slot game. What I discovered was nothing short of shocking. Enjoy the most provocative review of Lucky Slots on the web!

When I first joined I was greeted by a wide variety of slot games. Felling frisky, I ended up choosing Romantic Dinner. Unfortunately, there seemed to be a never ending stream of proposals for other games. As Romantic Dinner was loading I was alerted to two other games that were at my disposal. I was also notified that I could buy 65,000 coins for $10. I had 100,000 coins to start with. I wasn’t in a hurry to buy more coins, so I dove head first into the game.

As I refused the offer to purchase more coins, I was alerted to the betting rates. To be eligible I had to bet at least $2,100 for the bronze jackpot. I went with that since I had $100,000 at my disposal. 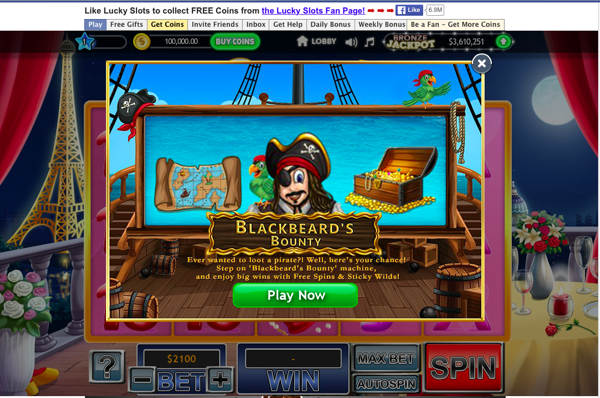 One of the many games I didn’t want to play.

As I tried to access Romantic Dinner, I was bombarded with offers for other games. I was astounded at the amount of games I had to refuse. Finally, after clicking out of at least 10 games I made it to Romantic Dinner. 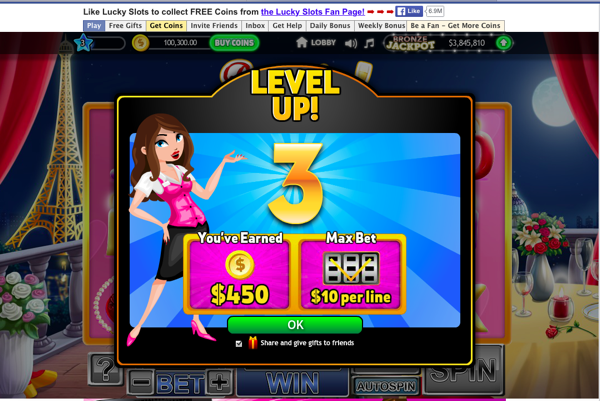 This level up happened after one spin.

After one spin, I had already gotten to the third level! This must have been my reward for enduring so many outrageous offers to switch games. I was slightly puzzled by the quick advancement, but happy to finally be playing something. 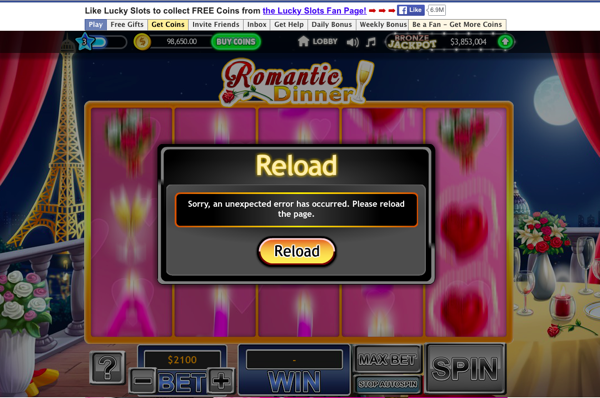 Once I got my feet wet with the game, I decided to use the auto spin option. This overloaded the game & I was met with an error message. After reloading the page I was invited to play Lucky Slots, where I was forced to publicly announce my relationship with Lucky Slots on my feed.

After that I had to endure another flood of invites to play random games that Lucky Slots offers. To shut them up, I accepted the invitation to play Heart of Texas. After one spin I reached the 4th level! I was awarded new coins. 1 spin later, I leveled up again. This was getting pretty bizarre. It seemed that it was nearly impossible to play the game without getting bombarded with worthless level ups & promotions. 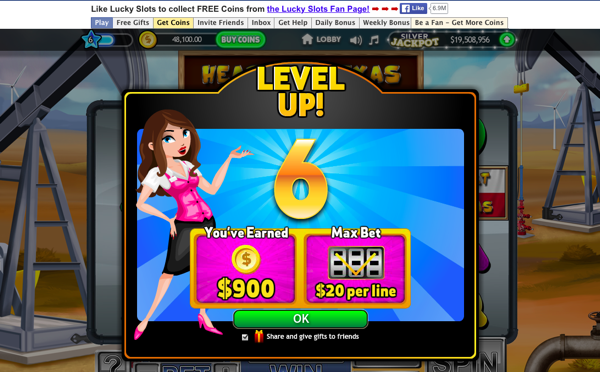 This was getting ridiculous!

Not impressed with their antics, I continued to play. The next spin I was alerted that I had reached level 6. Lucky Slots had also posted a message on my Facebook wall. That was the last straw, I quit with no hesitation.

Lucky Slots is so hard to play it’s painful. To say that this game was the most dysfunctional slot game that I have ever played is an understatement. The graphics are appalling & you cant play in peace. It’s nearly impossible to play more than one spin without some sort of offer, random post on your wall or level up. This takes all the fun out of the game & makes you deeply regret giving them access to your Facebook account. Apparently Lucky Slots’ glory days are long gone. Now they have become nothing more than mindless spammers. I wouldn’t recommend this game to my worst enemy. Do yourself a favor & play a better game!