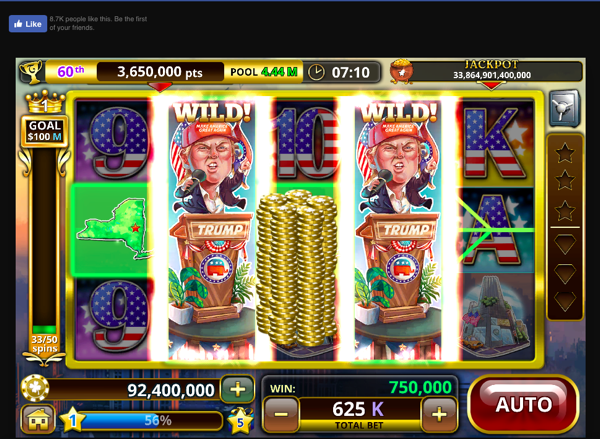 Out of all the political apps on the market, none are more entertaining than Slots: President Trump. Politics has never been more profitable than with this ground-breaking app. This wild game manages to take the casino action in Vegas to Washington DC. Through the beauty of slots, players get to take a comical look at what goes on in the White House. It’s already won over 10,000 players, and the number is growing by the day.

Even if you support the current administration, there’s still opportunities to get in on the action. Trump isn’t the only leader available, players get to choose from a slew of former US presidents. From Bush to Obama, no one escapes the satire of this hilarious slots game. The growing popularity of this game has made it impossible to ignore. We decided to dive into the details and see what this game has to offer. Enjoy the fruits of our labor, politics will never be the same! 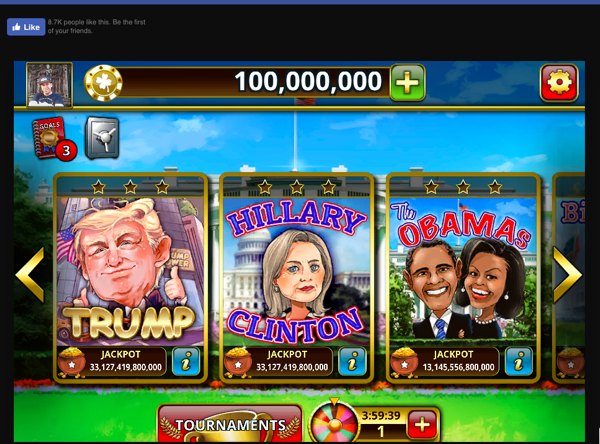 The amount of presidents available is staggering.

As soon as I was directed to the lobby, I was greeted with a hilarious set of choices. Numerous US presidents and potential nominees where available to play. From Bill Clinton to Abe Lincoln, no one was saved from this game’s comical imagery. Faced with so many options, I decided to pick Donald Trump, since he is the most relevant. 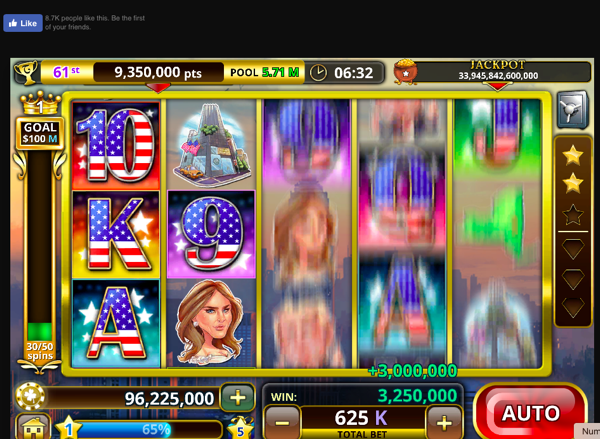 This win was barely keeping me in the game.

Armed with 100,000,000 coins, I was ready to enter the lavish world of Trump’s presidency. The reels came to life with numbers and letters painted with the stars and stripes of the American flag. Trumps wife also flashed across the screen, as well as states that supported him. I spun furiously, but was greeted with lackluster victories. Winning 200,000 credits may seem wild, but it pales in comparison with the 625K spent on each spin. Just as my credits started to dwindle, I managed to win 3 million credits! 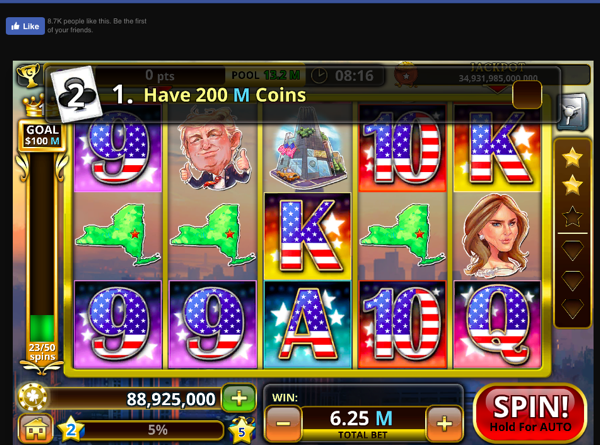 This put me back in the game, but I was going to have to up the ante if I was going to survive. I decided to start betting 2.5 million per spin, since it would increase any wins I made. This proved to be a good move, since I won 1,800,000 credits on the first spin! Emboldened by the improved winnings, I raised the bet once again. This time I was betting 6.25 million per spin, which raised the stakes considerably. I only won me 500,000 credits, instantly debunking my strategy. 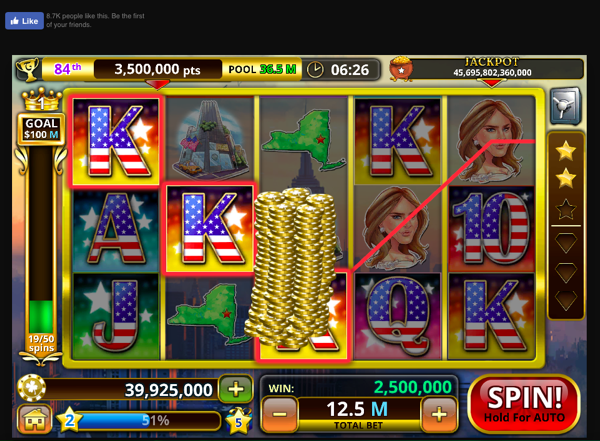 I was far from breaking even.

There was still plenty of credits left, so I continued betting this obscene amount. My next spin helped me level up, and to celebrate I raised my bet to 12.5 million credits a spin. This was outrageous, but by now I was craving a big win. This sacrifice won me one million credits on the first spin, so I decided to try again. After a few uneventful spins, I ended up winning 2.5 million credits! This wasn’t covering my losses, and I was still far from reaching the third level. 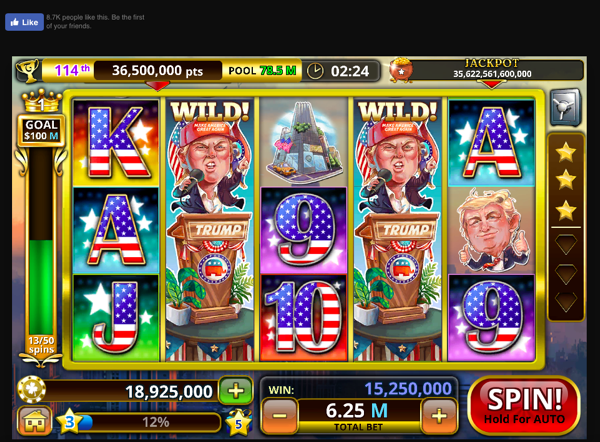 This epic win came a spin too late.

Completely bewildered at how to advance, I continued betting 12.5 million a spin. I won 4 million credits on the following spin, which inspired me to keep spinning. Despite winning 6 million and 4 million credits multiple times, my credits disappeared. At the last minute I reached the third level and won an additional 3,750,000 credits. On a last ditch spin I ended up winning 15,250,000 credits, but it wasn’t enough to keep me playing. Sick of the monotony, I ended up quiting the game.

Slots: President Trump is a funny premise with a serious lack of diversity. While playing users are encouraged to bet big or not bet at all. Unfortunately, the return isn’t enough to keep the show on the road. There are no bonus games, which causes the game to lose its flair rapidly. Despite these shortcomings, the game was still enjoyable. Hopefully the developers add some bonus rounds to give this game the longevity it needs!