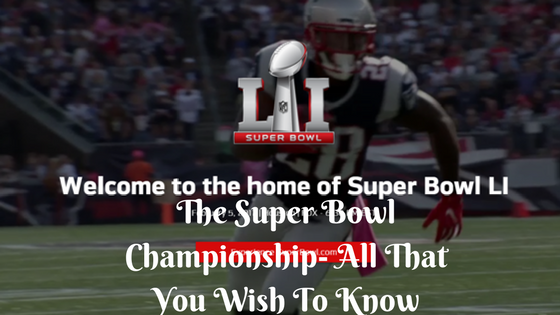 The Super Bowl Championship- All That You Wish To Know

Are you all prepared for the grand super bowl championship that is Super Bowl LI, scheduled for February 5, 2017 to be held at NRG Stadium in Houston, Texas. This will be the third time the Super Bowl has been played in Houston, after Super Bowl VIII in 1974 and Super Bowl XXXVIII in 2004. It will also be the second Super Bowl to be held at NRG Stadium, the other being Super Bowl XXXVIII, which also featured the New England Patriots.
As you are gearing up for the main event by throwing a Super Bowl party at your home, gluing to TV and keeping the kids at bay to watch the show here you can find all what you wish to know about this great event. 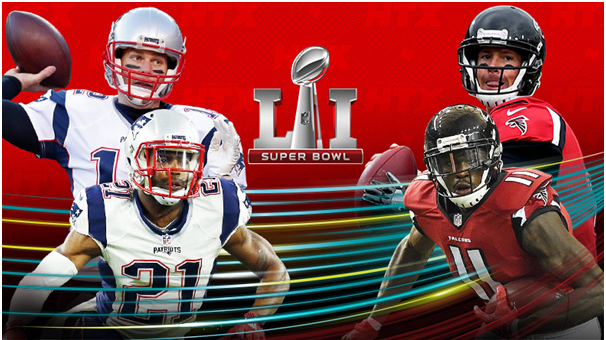 Enjoy Super Bowl-February 5, 2017 to be held at NRG Stadium in Houston, Texas

•The Super Bowl is the annual championship game of the National Football League (NFL), the highest level of professional American football in the world.
•Roman numerals are used to identify each game, rather than the year in which it is held.
•Super Bowl I was played on January 15, 1967, following the 1966 regular season.
•For four decades after its 1920 inception, the NFL successfully fended off several rival leagues. However, in 1960, it encountered its most serious competitor when the American Football League (AFL) was formed.
•The game was created as part of a merger agreement between the NFL and its then-rival league, the American Football League (AFL). It was agreed that the two leagues’ champion teams would play in the AFL–NFL World Championship Game until the merger was to officially begin in 1970. After the merger, each league was redesignated as a “conference”, and the game has since been played between the conference champions to determine the NFL’s league champion.

•The National Football Conference (NFC) leads the league with 26 wins to 24 wins for the American Football Conference (AFC). The Pittsburgh Steelers have the most Super Bowl victories with six. The New England Patriots have the most Super Bowl appearances with nine.
•The day on which the Super Bowl is played, now considered by some as an unofficial American national holiday is called “Super Bowl Sunday”. It is the second-largest day for U.S. food consumption, after Thanksgiving Day.
•The Super Bowl has been the most-watched American television broadcast of the year; the seven most-watched broadcasts in U.S. television history are Super Bowls. In 2015, Super Bowl XLIX became the most-watched American television program in history with an average audience of 114.4 million viewers.
•The Super Bowl is also among the most-watched sporting events in the world, almost all audiences being North American, and is second to soccer’s UEFA Champions League final as the most watched annual sporting event worldwide.

•The NFL restricts the use of its “Super Bowl” trademark; it is frequently called the Big Game or other generic terms by non-sponsoring corporations.
•Because of the high viewership, commercial airtime during the Super Bowl broadcast is the most expensive of the year, leading to companies regularly developing their most expensive advertisements for this broadcast. As a result, watching and discussing the broadcast’s commercials has become a significant aspect of the event.
•Popular singers and musicians including Michael Jackson, Madonna, Prince, Beyoncé, The Rolling Stones, The Who, and Whitney Houston have performed during the event’s pre-game and halftime ceremonies.
•Each year’s logo has the host stadium as a backdrop and the Roman numeral of the game below the phrase “Super Bowl”. As of this year the NRG Stadium

Super Bowl- How it was formed 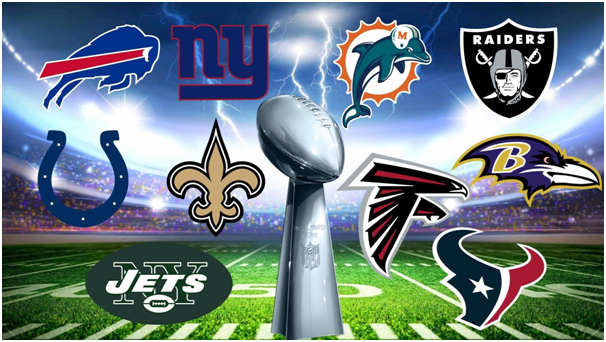 •Lamar Hunt, owner of the AFL’s Kansas City Chiefs, first used the term “Super Bowl” to refer to the NFL-AFL championship game in the merger meetings. It was likely in his head because his children had been playing with a Super Ball toy.
•The original “bowl game” was the Rose Bowl Game in Pasadena, California, which was first played in 1902 as the “Tournament East-West football game” as part of the Pasadena Tournament of Roses and moved to the new Rose Bowl Stadium in 1923.
•The stadium got its name from the fact that the game played there was part of the Tournament of Roses and that it was shaped like a bowl, much like the Yale Bowl in New Haven, Connecticut.

•Exploiting the Rose Bowl Game’s popularity, post-season college football contests were created for Miami (the Orange Bowl), New Orleans (the Sugar Bowl), and El Paso, Texas (the Sun Bowl) in 1935, and for Dallas (the Cotton Bowl) in 1937. By the time the first Super Bowl was played, the term “bowl” for any major American football game was well established.
•A vintage example of the ball is on display at the Pro Football Hall of Fame in Canton, Ohio.
•Super Bowl LI will be the 51st Super Bowl and the 47th modern-era National Football League (NFL) championship game. The American Football Conference (AFC) champion New England Patriots will play the National Football Conference (NFC) champion Atlanta Falcons to decide the league champion for the 2016 season.
•The event will mark the 50th anniversary year of the first Super Bowl, which was played on January 15, 1967. Super Bowl LI is the Patriots’ ninth Super Bowl appearance, the most Super Bowl appearances of any team.
•Super Bowl LI will be televised nationally in the United States by Fox and Fox Deportes.
•The Super Bowl LI halftime show will be headlined by Lady Gaga.
•For a full list of Super Bowl games and champions, see List of Super Bowl champions. 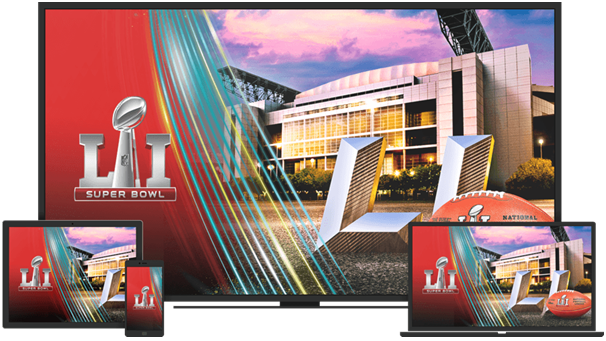 In US you can watch on Fox Channel

You can watch Super Bowl LI (51) no matter where you are in the world. The 2017 Super Bowl will be available to watch on a variety of broadcast networks across the globe, and can also be streamed via your computer, smart phone, tablet or home entertainment device (Xbox One, Apple TV, Amazon Fire TV, Android TV, Chromecast, and Roku). Listen to radio broadcast LIVE in any of 7 languages in 170 countries and territories or watch Live or download the apps to stay tuned that is your choice.

You can also watch the The Atlanta Falcons and New England Patriots face off in Houston on Feb. 5 at the following channels:

SB Nation: SB Nation will cover the game across all platforms to take you between the hashes, inside the locker room, at the tailgate and everywhere else a sports fan wants to be.

Verge– The Verge covers the experience and spectacle of the event whether you’re watching on a big screen or your smartphone, or whether you watch it for the commercials or the game.

Polygon– Your TV is the perfect place to watch the big game or to play video games simulating all the excitement of the Super Bowl. From old school classics to the latest football games, Polygon has got you covered.

Eater– Eater’s the place to go to find out where to eat during the big game. Whether you’re looking for the best places to watch and order takeout in cities across the U.S., on-the-ground dining and drinking recommendations in Houston — at the stadium or around the city — or smart takes on game day food like nachos and wings, Eater’s your destination for dining and drinking during the Super Bowl. Head over for maps, menus, and more.

Racked– At the Super Bowl, Racked has a critical eye on what we wear and buy, from the players to the sportscasters to the fans, at the game and at home. From the big business behind sports jerseys to where to score your own vintage football gear, Racked dives deep into the style seen and bought by millions.

Curbed– Curbed takes you behind the scenes of high-tech stadium design and inside the lavish homes of NFL players. Plus: tips on how to host the perfect Super Bowl party and a look back at football’s influence on cities across America.

Recode– It’s not just a game but it’s the biggest media event of the year. Recode tells you how to watch, what to look for, where the money is going, and who’s winning and losing in the business of the big game.
US players watch on Fox, Aussies can watch on Seven Network and Foxtel, Austrians at Puls4, Canada at CTV, Czech Republic at Sport 2, France -W9, Germany- Sat1, Ireland -Sky Sports, Italy- Italia1 and Fox Sports; Mexico-Televisa, Netherlands-Fox, Fox Sports; New Zealand- Sky Sport; Phillipines- ABS-CBN, Portugal- Sport TV; South Africa-SuperSport; Spain- Movistar+; Switzerland- Sat.1; UK- BBC and Sky sports channels.

This will be Lady Gaga’s second time performing on the Super Bowl stage, after having sang the National Anthem at Super Bowl 50 last February

Leading up to Super Bowl LI, fans may visit PepsiHalftime.com for behind the scenes looks into Lady Gaga’s journey to the Pepsi Zero Sugar Super Bowl LI Halftime Show and a chance to win sideline passes to see her perform live at NRG Stadium in Houston.

The Pepsi Zero Sugar Super Bowl LI Halftime Show is the most-watched musical event of the year. More than 116.5 million viewers in the U.S. watched last year’s show. Super Bowl LI and Halftime Show will be broadcast by FOX Sports from NRG Stadium in Houston.

Super Bowl LI marks Pepsi’s fifth year as title sponsor of the Super Bowl Halftime Show and 15th year as an NFL partner. Pepsi and the NFL have teamed up again to provide fans with a halftime experience worthy of pop-culture’s biggest stage.
The PEPSI ZERO SUGAR SUPER BOWL LI HALFTIME SHOW is an NFL NETWORK PRODUCTION and will be executive produced by RICKY KIRSHNER and directed by HAMISH HAMILTON.

Visit PepsiHalftime.com leading up to Super Bowl LI to see what this historic Halftime Show has in store for fans. For more information about Super Bowl LI, visit SuperBowl.com. 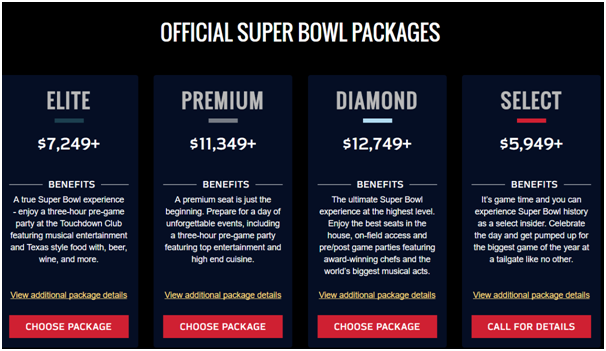 You can purchase Super Bowl tickets from here. There are three official super bowl packages. Elite costing $7249 and above, Premium $11349 plus, Diamond $12749+ and Select $5949+ Check in the details at Superbowl online website or contact toll free number 1-800-683-4846 or by email at sales@onlocationexp.com

Now relax after knowing all these details, if you are comfy person watching Super Bowl at home and then clean your TV sets, download the Super Bowl apps on your cell phone to keep updated; keep things ready for kids to get involved in activities so that they do not disturb you when you watch the show, move the furniture to a side to host more of friends and family as watching together is lot more fun and not to forget for delicious meals when you feel hungry.

If nothing of this sort is liked by you then watch football themed slot games here at online casinos.