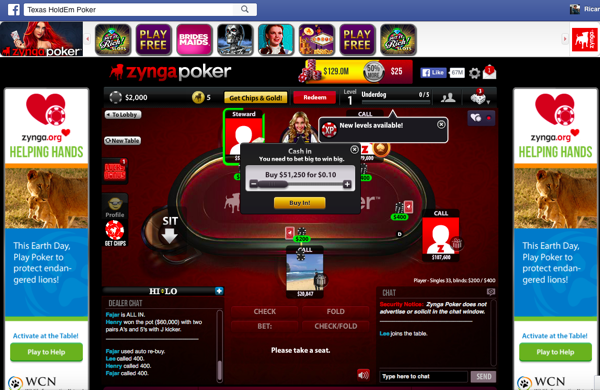 Zynga Poker went to great lengths to add an extra layer of excitement to the classic game of Texas Hold’em Poker. Many claim that they succeeded by giving us a fresh twist to a wellknown game. While they fell short of completely reinventing it, there are definitely some interesting surprises. The stunning visuals take your gameplay to a whole new level. We heard many good things about this game, so I decided to take a look at it on Facebook.

When you start playing Texas HoldEm Poker you are instantly immersed into a whole new world. This game reaches new levels as it comes to life with its seductive gameplay. You are instantly greeted with a racy promotional video before you dive head first into this provocative game.

Before you start to play you should know and understand more about this game.

As you know that Texas hold ’em is a variation of the card game of poker and is available even at casinos be it land casino or real money online casinos. Two cards, known as the hole cards or hold cards, are dealt face down to each player, and then five community cards are dealt face up in three stages. The stages consist of a series of three cards “the flop”, later an additional single card “the turn” or “fourth street” and a final card “the river” or “fifth street”. 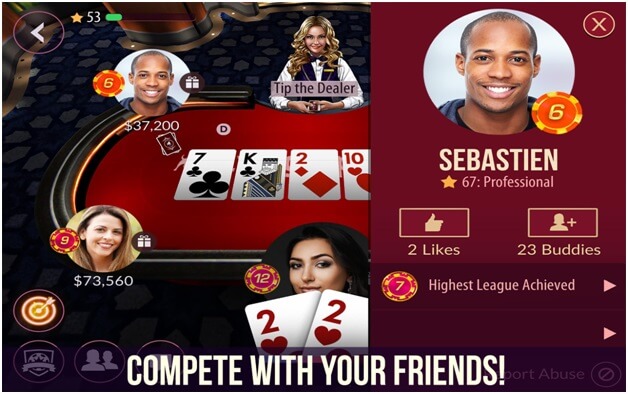 Each player seeks the best five card poker hand from the combination of the community cards and their own hole cards. If a player’s best five card poker hand consists only of the five community cards and none of the player’s hole cards, it is called “playing the board”. Players have betting options to check, call, raise or fold. Rounds of betting take place before the flop is dealt, and after each subsequent deal.
Before playing it is important to understand the game and how the cards are used in Texas Holdem from the value of suits and ranks to how they’re used during actual gameplay. In order to understand how the cards work in Texas Holdem, the first step is to be aware of what suits and ranks are.

While the suit places the card into one of four categories, the rank determines its value within that category. The ace can serve as the highest or lowest card in a rank, but the other rankings remain the same. They are (from highest to lowest): King, Queen, Jack, 10, 9, 8, 7, 6, 5, 4, 3, and 2.

If a game of Texas Hold’em results in a showdown, the winner is determined by comparing the cards of each remaining player. The participant with the strongest hand takes the pot. The following are all the available hands in order from strongest to weakest.
Straight Flush – Five cards of the same suit in sequence. The highest poker hand is the royal flush, which has an ace high followed by a king, queen, jack , and 10 (all of the same suit). Aces can also be used as low cards. In the rare case that multiple players have a straight flush, the winning hand is the one with the highest card. The chance of getting a straight flush during a game of Texas Hold’em is 0.0311%.

Four of a Kind – A hand containing four cards of one rank, as well as one unmatched card. Since Texas Hold’em uses community cards, it’s possible for more than one player to wind up with the same set of four. In this case, the winning hand is the one with the higher unmatched card. The odds of getting four of a kind (also known as “quads”) in a game of seven-card poker are 0.168%.

Flush – Five cards of the same suit that are not in sequence. In the case of a tie, each card is compared (starting with the highest one) to find the player with the superior hand. A player can expect to get a flush 3.03% of the time when playing Texas Hold’em.

Straight – A five-card hand that’s in sequential order but is made up of at least two different suits. If two players have a straight, the highest card of each hand is compared to determine a winner. The chances of getting a straight during a game are 4.62%.

Three of a Kind – Also known as a “set” or “trips,” this five-card poker hand is comprised of three cards of the same rank, as well as two other unrelated cards. If two players have the same set of trips during the showdown phase, then the higher of the two unrelated cards are compared to determine a winner. Players can expect to achieve this hand 4.83% of the time during games of Texas Hold’em.

Two Pair – This hand is made up of two cards of the same rank, two cards of another matching rank, and another card of a third rank. The highest ranking pair is compared to break ties, and the second pair is consulted if these are the same. In the rare case that both sets of pairs are the same, then the hand with the highest fifth card is declared the winner. The player receives this hand 23.5% of the time.

One Pair – Contains two cards of an identical rank, as well as three other cards of different but non-matching ranks. If two players each have a pair, then the highest pair wins. In the case of a tie, the other cards are compared in descending order. In Texas Hold’em, the chance of getting a pair is 43.8%.

High Card – This hand has no matching ranks, and its value is determined by the highest card present. The probability of ending up with one of these hands is 17.4%, which means players have a better percentage chance of receiving a one or two-pair hand.

Dealing the Cards
If you’re learning about how the cards work in Texas Hold’em, you’ll need to be familiar with the order in which they’re dealt. No matter where you play, the following order will always be adhered to:
1. The game begins with each player receiving two cards face down (known as hole or pocket cards). The player in the small blind receives the first card dealt, while the player with the dealer button gets the last card.
2. If two or more players remain after the pre-flop betting round, then three community cards known as the “flop” are dealt face-up in the center of the table. Players may use their two hole cards and the community cards to make the best five-card hand possible.
3. After another round of betting, a fourth community card known as the “turn” is dealt.
4. Another round of betting occurs, and a final community card known as the “river” is dealt in the center of the playing surface.
5. No more cards are dealt from this point on. One more round of betting takes place, and a showdown then occurs if two or more players remain in the pot.

The fun doesn’t stop there, from the get go you are greeted with a share bonus of up to $1 million in chips if you share the game with your friends! Get 60,000 FREE chips just for downloading your new favorite poker game! Plus, win a daily bonus of up to $45,000,000 in in-game money!

From there you have a long list of tables to choose from. You start with $2,000 in chips & an “underdog” title to defend.

I quickly joined a table & the game was on! From the start the dealer was offering to sell me $51,250 in chips for 10 cents. I wasn’t impressed so I decided to keep playing for as long as my welcome bonus allowed.

I was a little perturbed about being hustled during my first few seconds of gameplay. But then to my surprise I was alerted that a new level was available! I quickly switched to the new XP level to get a fresh start.

As I clicked the button for the new level I was greeted with a list of chip purchasing options to be able to enter into the new XP levels. Apparently you have to pay to play with Zynga. I closed the window & went back to another table.

Before long I was alerted that I had a chance to win free chips. Desperately in need of this fresh boost I jumped on the chance. It opened up a brightly lit slot machine, once spun I won 35,000 chips. I was back in the game!

From there I went on to play a few tables. Unfortunately your chips don’t go too far & you are constantly pestered to buy more chips. This vicious cycle ended up souring the entire experience for me. Unwilling to pay money for fake chips I ended up calling it a day.

Overall Review
All in all this is a great game for someone who wants to spend money playing poker. However for those of us who are looking for an innocent pastime this is a terrible choice. You will not be able to play for free. If you refuse to pull out your wallet you will be bombarded with buying options until you either quit the game or smash your laptop.