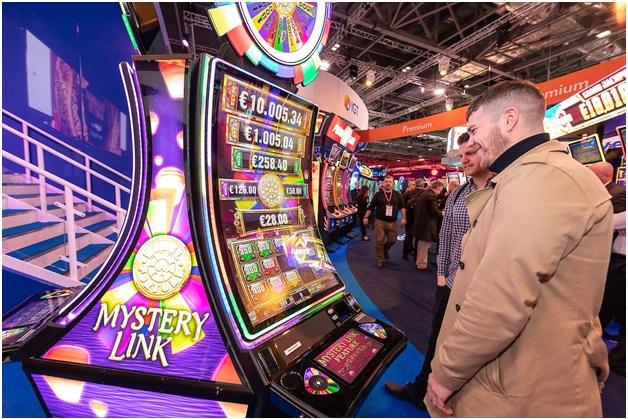 8 Most Popular IGT Slots to Play and Win Big

Mystery Express IGT slots to play has a travelling theme as you go on a train journey of intrigue throughout the capital cities of Europe. With a Victorian feel, you begin in London as you see Big Ben in the background. With the mysterious Christopher and Isabella characters perched alongside the reels, symbols include pistols, slices of chocolate cake, whiskey tumblers, diamond rings, pocket watches, pendants and characters Christopher and Isabella.

There’s also a green gemstone wild symbol which substitutes for all symbols excluding the bonus symbol – it’s also the most rewarding giving you 3, 10 or 33.33 times your stake for 3, 4 or 5 on a payline. Winning combinations are formed by getting 3 or more matching symbols from left to right beginning from reel 1 on any of the 30 paylines.

The Mystery Express slot is a Level Up game where you begin in the Traveler Level where you head to London. Every time a bonus symbol appears in the base game, Travel Experience points are earned. There are lots of other features in the slots game. You can win big prizes of up to 1200x your stake per spin along the way.

Red Hot Tamales IGT slots to play with traditional theme is slots machine where you find classic symbols like bells, 7s, lemons etc and adds a fiery Mexican twist to the visuals.

The gameplay is fairly standard and faithful to the original land-based machine. There’re no big bonus rounds or tumbling reels or anything like that with Red Hot Tamales.

Just three reels and 27 paylines with a maximum win of about 200x your stake per spin. Fun for the retro heads who are used to old-school slots, but not the biggest paying or most exciting of IGT’s games overall.

The gameplay could spice up your day, as winning combinations worth up to 5,000 coins land across the three reels.

3. Book of the Sphinx

This is an Ancient Egyptian themed IGT slots to play game where the main attraction is the huge free spins bonus round which can give out up to 250 free spins on the right pull!

With five reels and 20 paylines the main game isn’t the most innovative. You’ve probably seen scarabs, ankhs, jewels and all that jazz before.

The Pharaoh is the main symbol and the most rewarding – 3, 4 or 5 on a payline will give you 2, 12 or 100 times your stake respectively. The Book (of the Sphinx) is the wild symbol and replaces all symbols bar the Eye of Ra and special symbols (more info below).

The other symbol to look out for is the Eye of Ra symbol – when 3 or more appear anywhere across the reels, you’ll play the Eye of Ra feature. These triggering symbols are then replaced by a randomly chosen symbol (bar the Book symbol). These randomly chosen symbols then expand to take over the reels they appear on – this will give you wins regardless where they are on the reels.

Book of the Sphinx also comes with a Free Spins Bonus feature – this is triggered when you see 3 or more Book symbols anywhere in view. 3, 4 or 5 of them will give you 10, 15 or 30 free spins as well as 2, 20 or 200 times your stake. 1 symbol (bar the Book symbol) is randomly chosen to be the special symbol during the feature.

One of IGT’s MultiWay IGT slots to play, Fortune Coin is a historical Asian themed slots game with 5 reels and 243 ways to win.

This game features combination bonuses as well as a Scatter symbol and a four-level jackpot with a maximum win up to 600,000. With all of these exciting bonuses, you’ll soon find yourself becoming an avid coin collector!

The MultiWay approach, plus the synchronised reels feature that turns several slots on each reel into the same symbol every few rounds, keeps things fresh. Plus, that tasty max win of 1000x per spin!

The lucky Chinese theme has been done a lot throughout slots history, so it’s good to see a few interesting concepts added to this one!

When the lucky Fortune coin appears, it can award an instant cash prize, a free spins game or a jackpot bonus. When the latter is triggered, a jackpot award is always guaranteed. There are also boost symbols that increase the total amount of your jackpot award.

The original Cleopatra IGT slots to play is one of the most famous slot games of all time. This modern update (although it’s a few years old now) adds sharper graphics and a golden spin feature.

It has the same Ancient Egyptian themed Cleopatra icons and style that many US players know and love – but adds some massive extra prizes into the mix. The slots game offers a variety of bonuses including nudging symbols, stacked wilds, re-spins, multipliers and free-spins. It’s top prize is worth 5,250 x

Landing three or more matching symbols on the same payline will provide you with prizes on this slot. The most generous symbols in the game are the wilds, which payout 1750x your stake for five-of-a-kind combinations.

Diamond Spins is the even more souped-up version of the classic Cleopatra IGT slots to play game.

It offers three diamond jackpots, on top of all the Ancient Egyptian themed action frequent visitors of real-life slots machines you will be familiar with.

You can also bag a 10,000x your stake payout if you get very lucky and land all Cleopatra Gold Wilds.

The game offers a free bonus of a 3x multiplier along with up to 180 free spins. In order to find the winning combinations on Cleopatra, you need to uncover three or more matching symbols on a payline. It is better for your winning chances to enable as many paylines at any one time, as only active paylines can pay prizes.

The amount you win will depend on how much you decided to wager. Cleopatra is a low-volatility game, so small prizes appear fairly regularly and add to a bigger total in a short space of time.

In this IGT slots to play Mayan temples, statues, coins and gods and goddesses fill the reels here. Alongside all that, you get two different bonus rounds and free spins feature.

Hit the Grey Mask bonus symbol, to trigger your chance to hit another in the next 4 spins – do so and your prize gets multiplied. You can chain these together for a big win. It comes with Mini Slots Bonus and Memory Bonus features where you can win cash prizes. It’s all about the Free Spins Bonus feature where you can win up to 1,000 free spins with a 2x multiplier.

Pull five of those in a chain, then fill the reels with the Mayan statue symbol and you just might get up 10,000x your win. Mayan treasure indeed!

8. The Price is Right

This is a perfect licence for US players who remember this classic gameshow, which was one of the longest running TV shows.

This feature-packed IGT slots to play has no less than four different bonus games! They are:

Because this game is so different from other slot machine games, you may find that it takes you a little while to get used to the way it works, but once you’ve got the hang of it, you’ll find that it’s very simple to master. Before you know it, you’ll be collecting symbols like a pro and lining up those feature Bonus games.

The maximum prize, although very rare, is 25,000x your stake – which can be won in the Cliff Hangers feature. The Big Wheel Bonus also offers out 1000x or more prizes for a few lucky players.

The Wheel of Fortune Jackpot Zone is OPEN! Celebrate our WAP and omnichannel products, spinning your way to exciting prizes. All participants have a chance to win a cruise from @HALcruises! Don't wait, stop by the IGT booth now! #IGTxG2E22 pic.twitter.com/q2nJnjcSKl

International Game Technology (IGT) has been pioneering slot machine technology since 1971. Ever since they got their foot in the door with the wild success of their slots they have been constantly expanding. They have artfully evolved from the top American slot machine developer to an international gaming powerhouse. From slot machines to online gaming, their presence is felt worldwide. They command an army of 10,000 plus employees with offices in every major hub in the world. Their approach to business can be described as both tenacious & visionary. They have grown their vast network by being at the forefront of slot machine technology. From land based slot machines to online gaming, IGT has made itself the cornerstone of every aspect of slots.

It’s hard to imagine that just 51 years ago no one in the casino industry knew about IGT. That’s because they started out as a private company in 1971. They didn’t go public until they had already made a name for themselves with the explosive popularity of their slot machines in 1981. They used the raging popularity of their slots to dive headfirst into slot machine development. IGT became the first company to use computerized player tracking. They also were responsible for developing frequent player rewards programs. This became an essential marketing tool for casinos & is still a key marketing feature to this day. Back in 1984 IGT saw the immense potential of this program & focused on perfecting it. Over time they further developed it into the infamous IGT Advantage & sbX systems.

IGT used these innovative programs to snowball into an international powerhouse. They got listed on the NASDAQ, & parlayed this success into a whole slew of new developments. They made their debut into microprocessor-driven spinning-reel slots with the groundbreaking development of the S-Slot. IGT went on to introduce the world’s first wide area progressive slot machine system in Nevada. The Nevada Megabucks slot machine created massive fanfare with an initial base top jackpot of $1 million. These massive jackpots were unheard of at the time. IGT then started branching out to international gambling markets when they entered Australia’s country’s club market.

Just a decade after they went public IGT grew exponentially when they were listed on the New York Stock Exchange (NYSE). The next year they founded IGT Europe which serviced casinos across the continent. 1994 proved to be another exciting year since IGT opened up offices in Argentina & South Africa. That same year IGT was crowned top-performing stock of the year by the NYSE.

They didn’t stop there, for the next 11 years IGT became a legendary slot machine producer with a combination of key acquisitions & groundbreaking developments. In 1996 they debuted Wheel of Fortune, one of the most popular gaming machines of all time. They also introduced multi-denomination technology to slots with Game King. In 1998 IGT tapped into the Native American market when they bought out Sodak Gaming. In 2001 IGT doubled their revenue when they acquired Silicon Gaming & Anchor Gaming. They also acquired Acres gaming and took advantage of their brilliant bonusing & systems technology to seduce more players.

After dominating land slots, the only place left to conquer was online. In 2005 IGt celebrated their 25th anniversary by buying out online gaming giant WagerWorks. This purchase jump-started their foray into online gambling. The went on to introduce the first multi-level progressive MegaJackpots game, Fort Knox. They went on to introduce a slew of wildly popular games, as well as continuing their international expansion. Nowadays they have offices in Brazil, China, Mexico, as well as controlling half of the land slots in the US.

That's a wrap on G2E 2022! We greatly appreciate our casino partners and operators and other booth attendees for taking the time to experience all of our fun events and new products and solutions we have to offer. WE'VE GOT GAME! #IGTxG2E22 @G2Eshows pic.twitter.com/KkFB5BSMvF