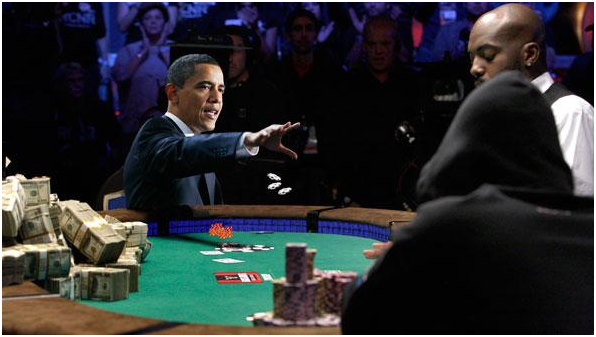 11 US Presidents Who Are Known To Love Poker

US presidents love to play poker? Not all of them. Joe Biden loves video games and plays them with this family and grand daughter, the popular being Mario Kart game.

On the other hand most favourite of US Presidents have been Abraham Lincoln. I like Lincoln as he was the man with simple tastes, animal lover, advocating women voting rights and establishing “Thanksgiving Day” as a National Holiday. After the year 2008 I started reading about Barack Obama and I love the way he worked as a president. While looking at the two personalities Obama and Lincoln the common thing I noticed is that both can be known as avid Poker players.

Poker and the Americans

Reading the book by James MacManus “Cowboys Full” shows the story of poker, from its roots in China, the Middle East, and Europe and the American phenomenon that describes how early Americans took a French parlor game and, with a few extra cards and an entrepreneurial spirit, turned it into a national craze by the time of the Civil War.

Amazon describes about the book as “From the kitchen-table games of ordinary citizens to its influence on generals and diplomats, poker has gone hand in hand with our national experience. Presidents from Abraham Lincoln to Barack Obama have deployed poker and its strategies to explain policy, to relax with friends, to negotiate treaties and crises, and as a political networking tool. The ways we all do battle and business are echoed by poker tactics: cheating and thwarting cheaters, leveraging uncertainty, bluffing and sassing out bluffers, managing risk and reward.”

George Washington the first president of USA also known as the Father of the country, used to host private cash games by forming a type of poker casino in his tent during the American Revolution. For this he was criticised as as a young officer for wasting time at the poker table.

As the General of the American Forces, his approach to cards and betting was as meticulous and disciplined as his military tactics. He took courageous but calculated risks, perhaps the first tight-aggressive player to ever play the game.

Andrew Jackson the seventh President of USA was famous as a poker professional who with his quick temper would speculate a loose aggressive style and if he would have been now he would certainly have taken Texas Hold’em as its favourite play (on a lighter note would certainly have used casino coupon codes to play all the classics).

It was fortunate that he survived an assassin attempt on him after being shot and the bullet remained inside his body for the rest of his life.

In his last stage of life, the French game of poker was evolving in New Orleans the city he saved from the British in 1815 – into what would later become poker, played by politicians across all states and territories.

Abraham Lincoln the 16th President of USA was earlier a riverboat pilot on the Mississippi, and indulged in penny-ante poker games. His game of play was diligent in move to compete with his contemporaries; Lincoln was the skilled poker player.

He gave up the game when he became congressman, for he did not wanted his personal integrity to be questioned rather he used the same poker logic, strategy and poker face while in office. In fact, he used a poker tale to justify a controversial decision to the public during the Trent Affair.

The 18th President of USA Ulysses S Grant was gifted by an excellent strategic mind, applying his powers of deduction and innovative military strategy during the American Civil War.

One of the first leaders to move away from battlefield supply lines to gain mobility, he’d feel at the home with online generation and their new-school creative play. The fellow Union officer William Sherman wrote that “Grant was a poker player, which should come as no surprise”.

The 26th President of USA Theodore Roosevelt was one of the most intellectual and well-read presidents of USA.  His love for sports was impressive as he was a keen swimmer, horse rider, hiker, boxer, and no doubt quite the card sharp. Roosevelt would embody the image of one who dabbles in poker semi-professionally, extremely successful in other areas of life and proving a force to be reckoned with at the tables too. It is said that he started his poker play at the smoky New York saloons where private poker games were held.

Warren Harding the 29th President of USA was a colourful poker player. Harding played such high volume during his time in what became known as the ‘Poker Cabinet’, that one rumour even has him losing a set of White House china in a tourney.

It is said that he pulled off the 1920 election victory and when asked how it was a simple reply “ drew to a pair of deuces, and filled”. Backdoor full houses do occasionally come in.

The 32nd President of USA Franklin D Roosevelt played nickel-ante Stud and HORSE in the White House throughout his three terms. The mixed game cash rotation provided a relaxing break from the days of the Great Depression and World War II.

Such low stakes, recreational cash action was a staple tradition of scores of presidents, generals and justices, a way to network and break the ice in diplomatic negotiations. He nicknamed his most ambitious political program ‘the New Deal’.

Harry Truman the 33rd President of USA was something of a sucker at the Poker table, and a calling station. He was fond of going to showdown just to see what his opponent held.

A man of religion, he wrote in a letter to his wife that he didn’t feel that enjoying activities like cards, dancing, and other guilty pleasures was a big deal. He was in the game for more than money; he just loved to play.

When he was sworn in, his buddies were afraid they’d lose their ‘chump’. Their worries were unfounded; he played on, even having a set of poker chips made for the White House, embossed with the presidential seal. Wow amazing!

As the 34th President Dwight Eisenhower was a military leader, the supreme commander of the Allied Forces and was no stranger to risk and information analysis. He believed officers should be prepared to gamble, to seize opportunities in the heat of battle.

He won large sums in barracks poker games, sending so many soldiers broke that he had to stop playing with the enlisted men. His bankroll management would also have been first-rate, as he reduced government spending and redefined fiscal policy once elected.

The 37th President of USA Richard Nixon was a Navy Lieutenant during the Pacific theater of WWII, he mastered the game of poker, crushing his fellow sailors for $8,000 in Five Card Draw and Stud cash.

A very large sum for the 1940s, he used that and his legendary reputation to fund a Congressional campaign. The heater continued as he won that too, before finally blowing up and overplaying a bluff in the form of the Watergate scandal.

Barack Obama is not just a casual poker player but an avid poker player. Don’t be surprised if I say he learned the game as a kid when in high school and use to play with his grandfather and with classmates. He is comfortable with many variations of the game such as stud, draw, holdem or more exotic forms.

In 1997, Obama started to become a regular player at a local game in Illinois hosted at the home of Senator Terry Links. There, politicians and lobbyists used to gather for a casual weekly low stake game where both Republicans and Democrats took the pressure off with no political discussion going on, just relaxed chat and jokes.

Barack Obama’s playing style has been described as tight cautious, something akin to a rock. He is not a much into betting and spending money but usually he is involved in a hand, he has strong cards and I believe a strong hand. Obama has a strong poker face (looks like), which is not really surprising given his achievements in the political world.

So much to learn from these Poker enthusiasts who not only  achieved something good out of it but also had a reason to display their talent too.

Where to play poker?

How to make deposits when playing poker online?

When you will start playing video poker games  you will find that there are large and very varied range of different variants available to you depending on where you choose to play. Each variant is going to have a different pay table in place and as such there could be a range of unique hand combinations that you could form on one variant but not on another. As such always make sure that you check through the pay table of each variant you are playing to discover what hand combinations you can form when playing each one.

Best poker payouts of all times

Also but note that often there are going to be some built in rules of play on one variant that may not be in place on another and it is both the unique payouts listed on the pay table of each variant coupled with the playing rules that will determine the long term expected payout of each variant.